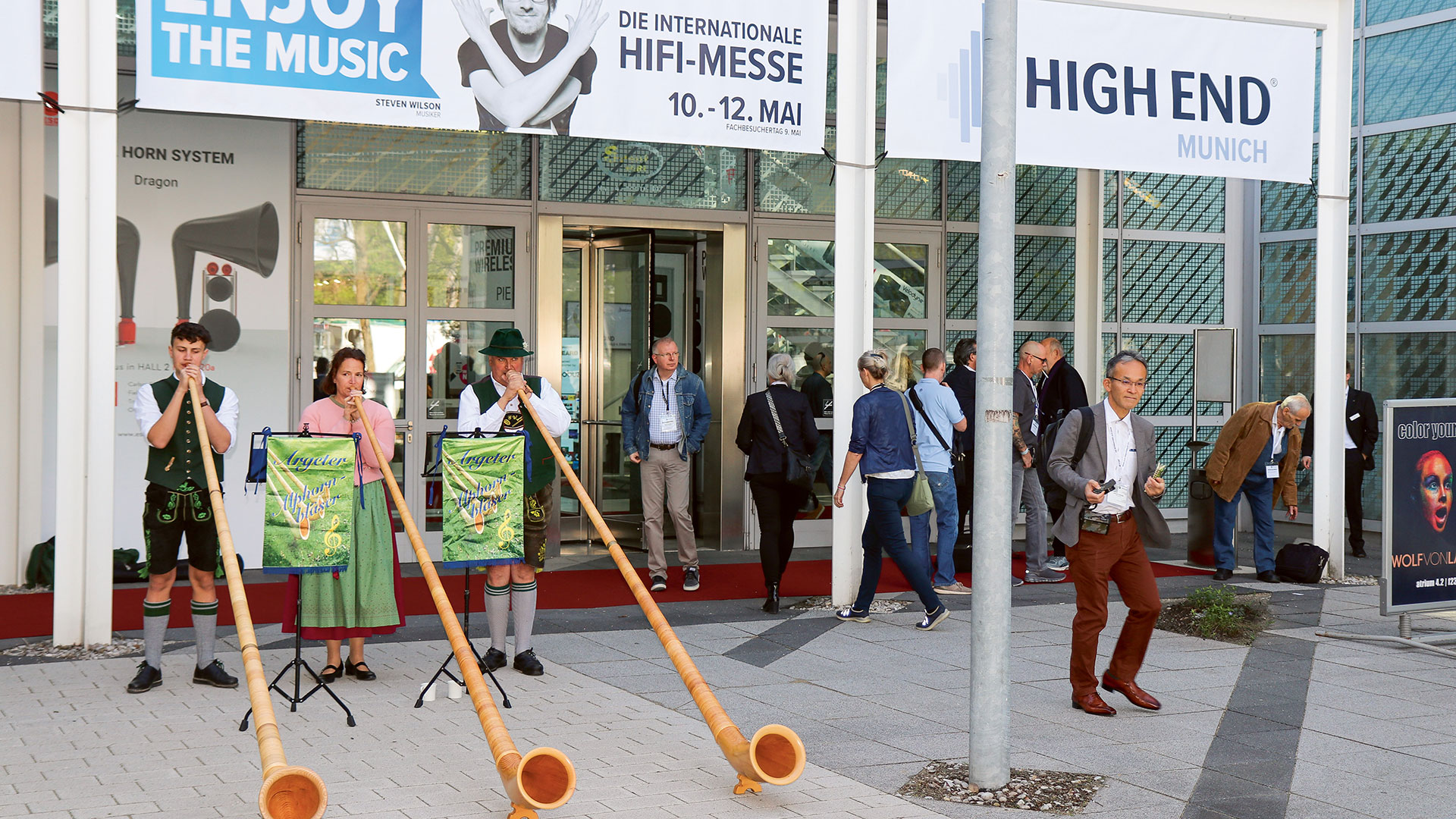 The High End in Munich was once again a meeting ground for the who is who of the hi-fi world. STEREO has compiled a selection of highlights for you. Not even the alphorn players could hide the fact that the High End has been becoming more and more international – English is now the language of choice.

The price is in Sterling. I don’t know the price in Euros.“ This is how we journalists were often answered when we asked about prices of novelties at the High End. It is increasingly not the German distributors who operate stands, but the manufacturers themselves. Two thirds of the exhibitors now come from outside Germany, from 42 countries – above all from the USA and Great Britain. Altogether, the organizers accommodated almost four percent more exhibitors in the halls and atriums of the MOC, which is now filled to the brim.

The number of visitors from the trade increased by a good eight percent, three quarters of which came from outside Germany, with Great Britain at the top here as well. The international share amongst the „normal“ visitors may not have been quite as high, but they also came in large quantities: a total of more than 21,000 people visited the High End 2019, an increase of 6.5 percent compared to the previous year. Most of them showed up on Friday. A big success for the organizers – not least due to the rainy weather.

Among the highlights of this High End were the presence of brand ambassador Steven Wilson, who not only signed countless autographs, but also gave an interesting insight into his credo as a music producer: he doesn‘t let any mastering engineer fiddle with his mix. „I bypass mastering completely“, he revealed in finest Oxford English.

The next High End will take place from 14 to 17 May 2020. However, first we have selected some of the most interesting innovations of the High End 2019 for you.

The German engineers have once again struck a blow and developed a stunning hybrid integrated amplifier, which should nevertherless cost no more than 3000 Euros – including DAC, Bluetooth and WiFi!

If you‘ve got a lot of space, a bunch of money and some strong friends, this extravagant horn system could be  interesting. Hearing distance: at least four meters.

Equipped with twelve tweeters, 16 mid-range and four woofers in 360-degree arrangement each and distributing over 23 channels, the SL-1 makes the sweet spot superfluous. Price: 43,000 Euro.

The Franconian manufactory brought the sound of the globally acclaimed „Viella“ to an even higher level. Price: around 23.000 Euro.

In addition to the Taurus direct drive turntable, Brinkmann presented this splendid integrated amplifier, which has an output of 2 x 250 watts and can be equipped with DAC/streaming or a phono module.

Gerd Weichler presented the compact drive unit with three motors for a still unnamed Transrotor newcomer. It could cost around 6500 Euros.

With its more powerful processor, new chassis from Focal, new colours, Chromecast, HDMI-ARC, Airplay2 and Roon, the new Mu-so is prepared for the future.

The Humboldt integrated amplifier owes its appearance to the renowned industrial designer Hartmut Esslinger. The Berliner completes Audionet‘s Ultimate series and is expected to cost around 42,000 euros.

A genuine headphone amplifier in compact format, with enough quality and power for almost any headphone – everything for 300 Euro.

In the outdoor area of the High End, Dynaudio showed how music is created live in a professional mobile studio with talented newcomers.

The vintage Linton costs around 1000 Euros, while the Elysian series, built with Scan Speak drivers in England, represents the new flagships.

The Berlin-based noble manufacturer, specialized in broadband systems, surprised with a very mature sounding system for less than 8000 Euro.

DAC with tubes: the display shows the level on virtual VU meters. Now available for 2200 Euro.

A sensation of this show: more than 50 years „later“ there is once more a TD 124 – with modern direct drive! The price will be just around the five digit-mark.

The latest addition to Gauder‘s successful DARC series is available complete with ceramic chassis or also with a diamond tweeter. Price: from 16,000 Euro.

From now on, WBT is coating the contacts of its „Nextgen“ series with gold atoms using the PVD plasma process, which is intended to ensure a particularly homogeneous structure.

The streaming expert Lumin from Hong Kong brings its own amplifier. The „AMP“ delivers 160 Watt into 8 Ohm from its Class A/B circuit and can be used in stereo or bridged as mono.

A stroke of genius from the Swiss manufacturer – the patented coax ribbon works open as a dipole in line-source arrangement, but is less sensitive to positioning due to the lamellas. Price:
above 30,000 Euro.

Under this promising name, Einstein Audio presented a new integrated amplifier with rather unusual design. It is expected to cost around 4000 Euro. 70 watts per channel at eight ohms are indicated as power. The mirror-symmetric design has an electronically fully balanced circuit.

After the death of his father David Wilson, Daryl Wilson presented the American‘s newest jewel. As usual, the sound was a highlight of the fair.

Comments and Opinions from STEREO

This year the High End leaves me – again – with an ambivalent impression. Fortunately, in more rooms than in the recent past one could properly listen to good music – sometimes even with systems in moderate price ranges. On the other hand, there were again systems in the upper six-figure range whose performance impressed me more visually than acoustically. There, „impressive“ is a double-edged sword, as it mostly meant an extensive collection of devices and accessories, crowned by loudspeakers, which burst the frame that could possibly be realized in any inhabitable home. They attract attention at all costs – preferably in dim light to prevent recognition of all their unfinished details. And yes, we are aware of the fact that we ourselves from the writing profession are not entirely innocent of this development. After all, we are only too happy to offer these attractions the attention they crave for by photographing, describing and testing them. However, these exhibitors are probably not even surprised anymore by mocking comments of down-to-earth observers and visitors.

Under the new leadership of the High End Society, which organises the Munich trade fair, the show has once again increased its wealth of ideas and diversity. Congratulations to the organizer, who makes sure that every visitor gets his money‘s worth. Whoever doesn‘t find anything of interest here and isn‘t infected by the high-end „virus“ is themselves to blame. And as far as the high prices of some – but by no means all – exhibits are concerned: I can hardly walk the streets today without seeing a car for 100,000 euros or more every other minute. Without wanting to propagate excess: HiFi at the limit, produced in small series, also has its place in the exclusive sector.

Nowadays, the HighEnd is essentially a business fair. English was omnipresent. This shows the importance of the HighEnd as the most relevant hi-fi trade fair on the globe, which is of course also great for audiophiles, because the international elite of manufacturers gathered there. The demonstrations are getting better and better, people know and optimize the rooms in the MOC, the systems are often adjusted absolutely on point. Digital features are spreading, whether it is in form of system expansion by manufacturers or the multifunctionality of individual devices. B&W even surprised with a mature multiroom system. The analog trend also proved its relevance with a large range of products: the Garrard 301 has risen again, Thorens offered a remake of the legendary TD124 as well as an open reel tape machine (!), which is already sold out for 2019. Whether digital or analog, HiFi stays exciting – and we will report.

The general mood was good, and the sound quality of the demonstrations has – thankfully – increased this year. Striking was the peaceful coexistence of streaming, CD, record and tape as sources. What worries me personally is the exploding price level with a certain neglect of the „middle ground“, which may foster the lack of young audiophiles. To phrase it with an edge: nobody streams from Bluetooth on mobile phones to a 700,000 euro system. Otherwise, the fair was fascinating and colourful. However I would like to tell some home cinema demonstrations that just „boom“ doesn‘t do the job – music „helps“ dramatically.