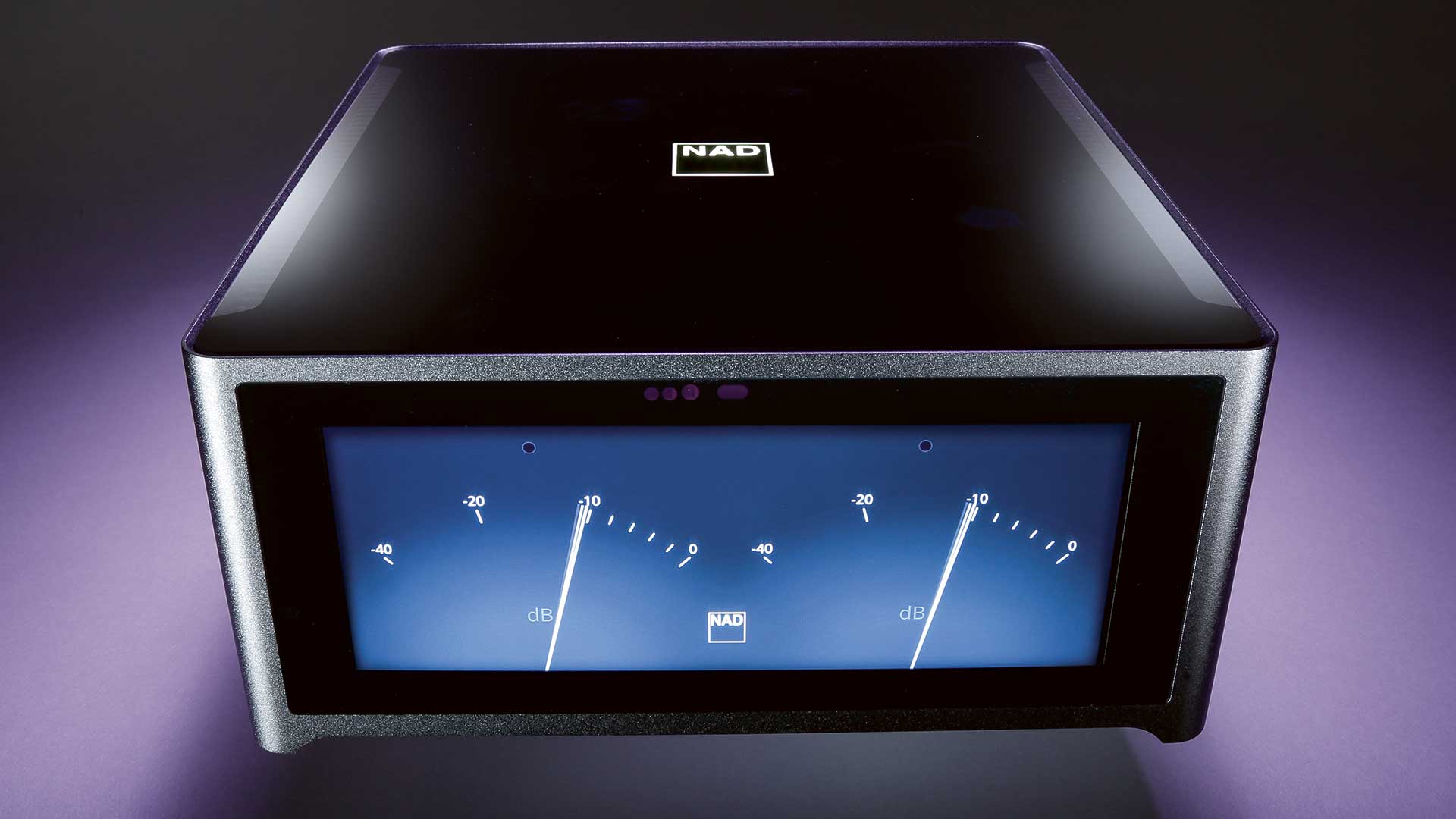 The brand new NAD M10 is small and inconspicuous. However, it is anything but a toy and instead full of clever ideas and technology.

Imagine you‘ve just spent three grand and now you get a cube weighing just about five kilos in return. Rarely has one seen the supporters of the „Kilo per Euro“ faction more confused with an amplifier. The fans of the „Watt per Euro“ department, on the other hand, can be quite satisfied, while fans of the „Watt per Kilo“ idea are probably quite impressed. After all, the NAD M10 is capable of easily pushing around 200 watts of unrestrained power into the connected speakers without even raising the device’s temperature. That is thanks to the latest generation Hypex NCore-Class-D amplification, which should enable the M10 to drive and control pretty much any loudspeaker out there – which we of course tried intensively.

In order to help the truth to its justice, one has to admit that the development was primarily neither about saving weight nor about gaining power. In fact, the M10 has a whole bunch of other qualities to offer in its beautiful and high-quality case besides its classic amplifier virtues.

It is apparent that its creators must have worked quite intensively with computers, as a 1-GHz ARM-Cortex-A9-processor is on board for doing the maths. In many areas the operation of this device requires a departure of old habits. That becomes obvious already when trying to switch on the M10. There is no button to be pushed, instead simply approaching the device is enough to switch the display from showing the currently played track to the „control panel“ function; for further functions, a light touch of the high-resolution touch screen is enough, whose „gorilla glass“ is also used in high-quality smartphones. Then, you can browse through various menus to inform yourself about the well-being and the settings of the NAD or to do such profane things as selecting a source.

You can choose between analog and digital sources, with streaming options also being on board. The DAC comes from the renowned supplier Sabre and processes data up to 32 Bit/ 384 kHz. This long list of details makes one thing perfectly clear: the term “integrated amplifier” does not really do the M10 justice. It seems to be more appropriately described as an “all-in-one-system”.

Music services from Spotify to Qobuz – a total of currently 15 – are supported, as is the reception of Internet Radio via tune-in. The streaming functions are carried out by the integrated BluOS module from specialist Bluesound, which also ensures the remote controllability of the M10 via app. Further, almost any preexisting remote control with volume control can be easily taught to control the M10. As if that wasn‘t enough, even multiroom options are already integrated, enabling music enjoyment in every room with the matching speakers. As a special highlight, all this is possible in HighRes!

We assume that by this point it is almost obvious, that an HD Bluetooth connection is of course also possible. The NAD’s versatility, however, doesn’t stop there: compatibility with the smart home systems from Crestron, Control4 or Lutron are also featured, with everything being controlled by the BluOs app. The device from Canada even comprehends voice commands – with the addition of the so-called „Voice Skill function“ in the Alexa app, music collections and streaming services can be commanded via voice control. Although we, admittedly, remain somewhat cautious about this topic, it is definitely a very interesting option for many people out there.

And still the beautiful little M10’s abundance of abilities is not exhausted. NAD has also decided to cooperate with DIRAC, a company that offers software, allowing the loudspeakers to be matched to a room and the frequency response to be smoothened, especially in the bass range. For this purpose only the software needs to be downloaded – the necessary microphone is already included in the scope of delivery. All of the licensing procedures and the technical fine-tuning took longer than expected and hoped for, which is why the market launch had to be delayed a little.

The measuring procedure is incredibly simple, despite all its complexity – if you want to try out and get to know all the possible variations and applications. Absolutely no in-depth technical training or understanding is required to adjust the sound of the loudspeakers to the room and placement, within certain limits, even to your personal taste. The entire process has been largely automated and/or as logically and straightforward structured as possible. We would, however, again advise absolute beginners or those who are not interested in the technology not to look for the cheapest price at the expense of a qualified instruction and installation by a specialist dealer.

If you want to try it for yourself, you should take your time and screw the supplied measuring microphone onto a camera tripod. Set the desired measuring procedure in the menu (see screenshot below) and then assign the calculation to the program at five measuring locations (on ear level at the listening position, left and right at the same level and left and right behind the listening position). This works very quickly and reliably. However, you should not fall into the trap of believing that the combination of amplifier and loudspeaker, or the placement, no longer play a role. You can‘t trick physics entirely – but you can find a viable compromise.

What is exciting about using DIRAC – an A/B comparison is easily possible – besides the changes in tonality, is that, depending on the recording, the music sometimes takes on a completely new character, similar to a remaster. The spatial image and character of an old Stones classic such as „I Got The Blues“, for example, changed entirely after the measurement – the stage became wider, the sound was pulled forward, and Jagger‘s voice suddenly seemed to have been recorded in a different room.

With many other recordings, however, there was no doubt as to the usefulness of the clearly positive effects of the measurements. We were given the impression that the quality of the recordings had increased significantly in terms of the precision of imaging and timing. Not surprisingly, the DIRAC system not only optimizes the frequency response, but also the phase response. With mediocre or bad recordings, especially with original mono recordings artificially trimmed to stereo, unfortunately only changes can be achieved, but no real improvements. The bottom line, however, is that it is a feature that will in many cases help to make the sound much more natural and realistic. However, neither DIRAC nor any other software can change room acoustic flaws, such as, for example, high reverberation. Only mechanical measures such as absorbers and diffusers, as we have presented them to you in the recent past in our room acoustics article, can make an improvement in that regard.
And we still haven’t reached the end of this exhaustive list of qualities and possibilities: despite all its modernity, the developers have not forgotten to also care for the wishes and expectations that lovers of classic hi-fi have. Hence, there are separate outputs for subwoofers, a pre-amplifier output, a traditional tone control that can be switched off and even a display on the amplifier that can be switched to a level indicator or volume control.

Our first listening session initially took place without the DIRAC system and using our pair of PMC 5-22. The music came via Tidal – in master quality if possible. With Norah Jones‘ „Court And Spark“ we quickly felt that the fundamental harmony between amp and speaker was given, which was not quite as much the case for example with the Raidho XT-l. It got exciting when we connected the massive Vietnamese two-way horn speaker Thivan Eros9. In our small listening room, the 38cm bass driver was clearly too much of a riot under normal circumstances. However, after the „treatment“ with DIRAC, the result was absolutely worth listening to. On top of that, the Asian was also taught tonal manners in this way, without losing its joy of playing and dynamic qualities in hard rock music or rough blues.

It’s true, the NAD hides its many capabilities well, but its abundance of features as well as its musical roots in the typical NAD tradition bely the elegant but inconspicuous appearance. Certainly the M10 will occupy a place of honor in the dense field of integrated amplifiers for a long time coming!

The NAD M10 is a device that is in equal terms clever, innovative and musical. Integrated amplifier, DAC and room compensation harmoniously combined in just one small device. Excellent workmanship and good usability come on top of that.