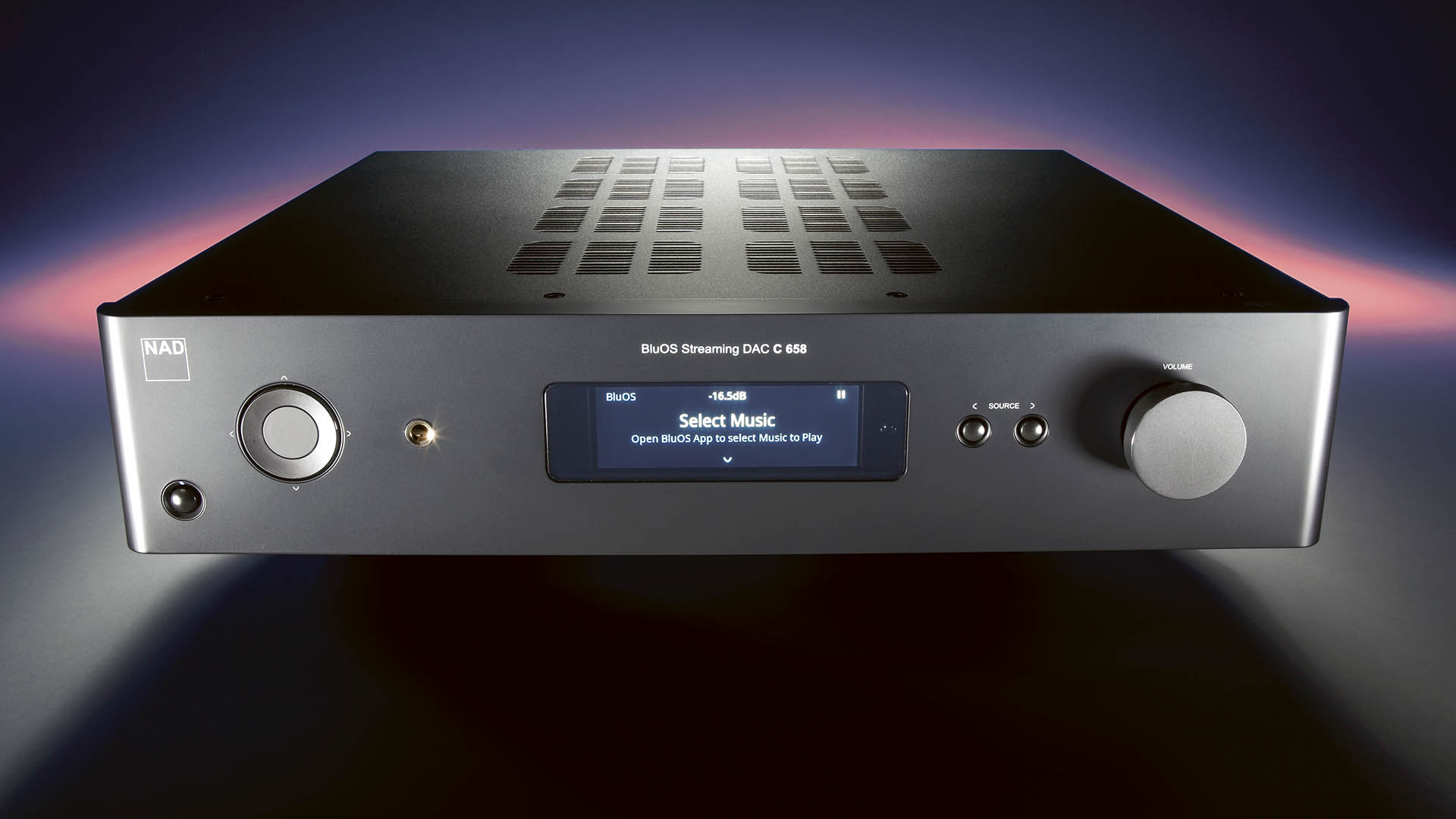 Only Looks Classic – The name NAD has for a long time been synonymous with good sound at a moderate price – at the affordable cost of limited features. The recent M10 integrated amplifier however was a complete game changer. Now, the C 658 preamplifier combines classic looks with a generous selection of features.

It seems to be pretty clear that the days of the "hi-fi altar" are counted. Modern customers are looking for high quality products that don't draw attention but rather combine a wealth of features in one device. NAD has recognized and respected customer demands and has developed a series of units with the well known NAD look that has been tailored specifically to this type of consumer. It works especially well with already existing or planned active loudspeaker systems or multi-room setups. The latter is possible by means of the integrated BluOs module, which also enables streaming from Qobuz, Tidal & several other providers – of course uncompressed and in high-resolution with 24 bit/192 kHz. Even with MQA is integrated, which is a clever coding technique with little memory requirement but extremely high sound quality.

The system can cater for up to 64 rooms independently – a magnitude that should even satisfy a lord of a castle. BluOs can also be integrated into some home automation systems, allowing them to control music in addition to lighting, heating and other home services. Further features such as AirPlay 2 and voice control via Siri then seem almost minor in comparison, although they are anything but usual for hi-fi devices.

In spite of all modernity, NAD has not forgotten about the friends of classic analogue devices: two high-level inputs and a high-quality phono MM input for turntables with magnetic system are also available. In addition, the rear panel even offers balanced active speaker or power amp connections, and two subwoofer connections were also included in the feature list. These are adjustable in their working range via software. Although the volume is classically analogue, it is not controlled by potentiometers, but by a finely woven network of resitors. The NAD converts analog signals into digital information by means of an A/D converter, but there is an "analog bypass" mode in which analog signals are not converted. The option of a high-quality Bluetooth connection according to the Qualcomm apt-X-HD standard is also perfectly up-to-date. It even works in both directions. You can receive music from your mobile phone or output signals wirelessly, for example to headphones.

In addition to the modern equipment and easy operation, the developers managed to also maintain the high technical standards that have been placed on NAD devices for decades. A good example is the  D/A converter from Sabre. It enjoys an excellent reputation and does a very good job, as our listening test proved. It offers two coaxial and two optical inputs, which should be sufficient for most applications. Other modern features like wi-fi probably don't come as a surprise at this point.

The NAD really starts to shine when you take the DIRAC room calibration into account. No matter whether you operate active speakers or passive ones in combination with a power amplifier, the DIRAC system is able to solve or at least greatly minimise many room-specific problems, especially in the bass range. You may be familiar with the following situation: after a long period of pushing the speakers around and trying to agree on the best optical position with the people you share your home with, the loudspeakers have finally found the position that least affects the aesthetic perception of the co-decision-makers. However, that often means drawbacks for the acoustics. Or maybe the placement of the speakers is not at all bad from a sonic point of view, if it weren't for the fact that the sofa on which you would like to enjoy your music is located directly against a back wall, which is unfortunately anything but beneficial to the sound.

For both of these frequently occuring situations the DIRAC system can alter the frequency response determined by a measuring microphone in such a way that the bass sounds crisp, clearly contoured and arrives at the listening position with correct timing. If the loudspeakers are capable and the calibration has been carried out correctly, there is a very good chance that the loudspeakers are still visible, but acoustically recede into the background and let the music take precedence.

And the NAD has another advantage: while many manufacturers if at all speak rather vaguely about update and upgrade capabilities, the Canadian company, which is part of the Lenbrook Group, has been making a promise since 2007 that still holds true today: the possibility of being able to implement new technology in an already purchased device, even retrospectively, by means of a system called "MDC - Modular Design Construction". Currently, NAD offers an HDMI 4K module, the MDC HDM-2, at a price of 329 Euro. It also fits into the first devices ever equipped with this technology, the NAD models T165, T765, T775 and T785, all of them AV processors and receivers.

It would be more than unfair to put the NAD in direct comparison with the highest-priced competitors, but it is still absolutely remarkable how much audiophile spirit NAD has managed to pour into the C 658. The look and feel of the NAD is far behind AVM & Co., which is only logical in view of its pricing. The features and sound quality, as well as the convincing operating concept, are remarkable. Even in very high-quality systems the NAD showed, for example with "Private Investigations", that it was by no means satisfied with the role of an outsider. The sound image was a bit tighter and slightly smaller in presentation, the bass lacked the final bit of pressure and blackness, while the highs would have benefitted of a little bit more "sparkle" and also slightly lacked the ability to transport finest vibrations. On the other hand, the sound image had a very high dynamic quality, was tonally perfectly suitable for long term use and most importantly: it transported plenty of emotions! A great offer with high value for money!

A preamplifier/streamer/DAC with DIRAC room calibration in classic and discreet design at a competitive price. The sound is suitable for long-term musical use, the operation is simple. Tempting, not only in combination with active speakers! 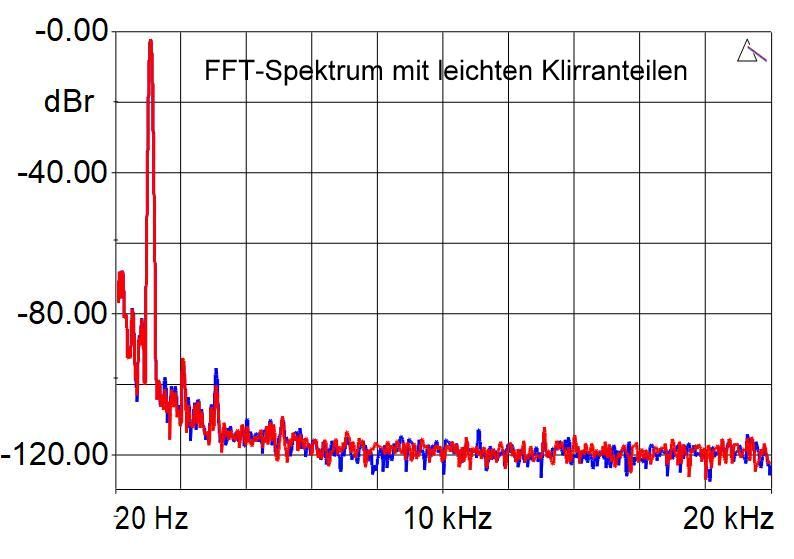 Very good measurement results throughout. Only the upper cut-off frequency is rather mediocre at 44 kHz.