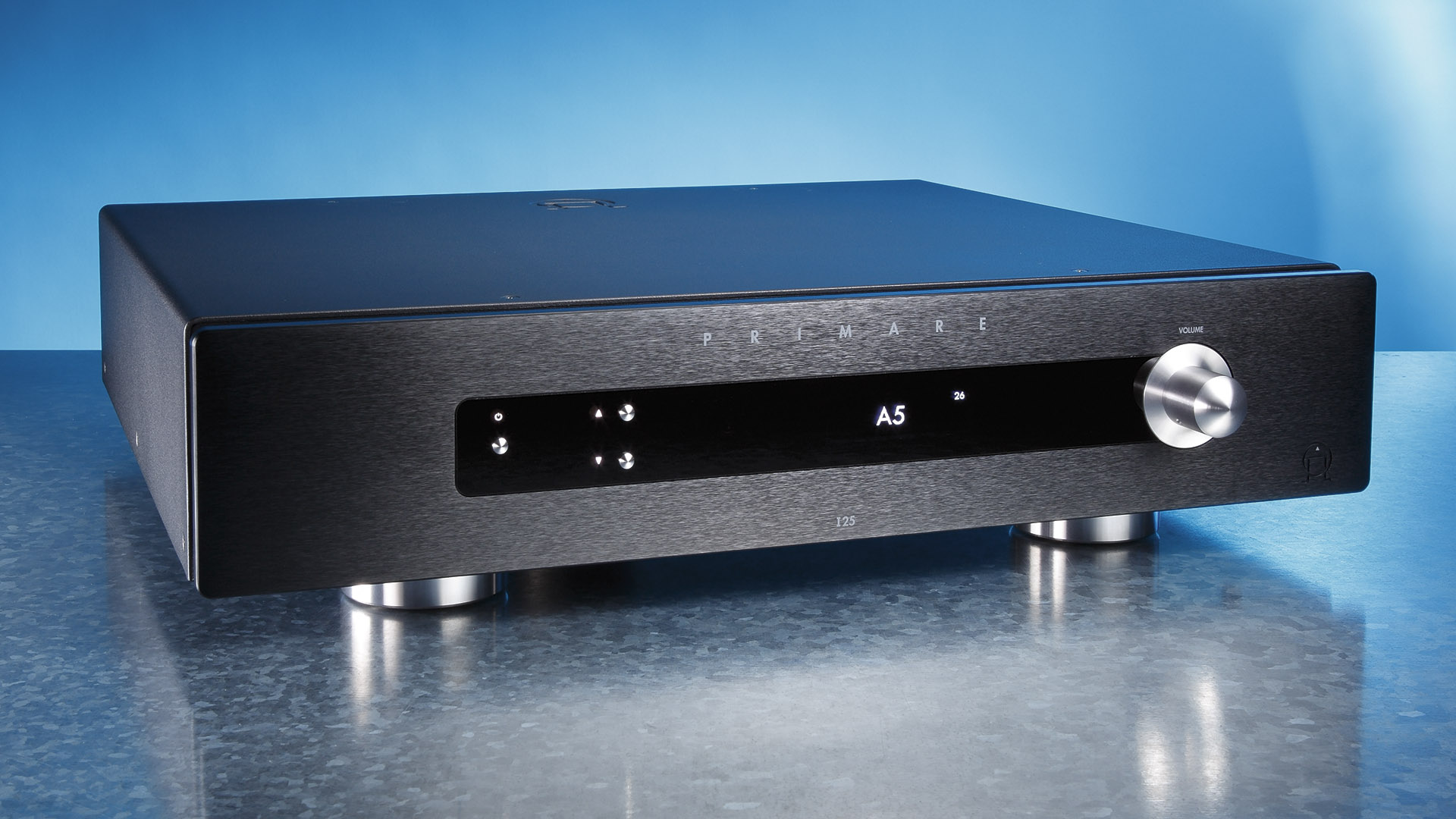 Musicbox of Swedish Steel – The Swedes from Primare really know what they're doing when it comes to consumer electronics – as the I25 proves.

The very solid and tidy looking front panel is at first glance the most obvious appeal of this amp, which was conceived and built in Sweden. Touching the volume knob, which was milled from one solid block, and thus changing the level is a haptic experience that you wouldn't normally expect in this price class. The display primarily shows the selected input, while the three small metal buttons are used for input selection as well as to switch the I25 on and off.

The back of the device is kept in black or titanium and is quite simply arranged in the I25's most basic configuration – though without anything being missing. There you find five pairs of RCA inputs, a fixed level line output and a preamp output as well as the very solid speaker terminals.

Now add the digital options of D/A converter and the retrofittable Prisma streaming and multiroom plug-in module and the number of connections becomes truly opulent. It probably isn't necessry to explain at this point what a D/A converter does. The Prisma module on the other hand was developed in-house by Primare itself and does require a closer look – which we'll come back to later.

Primare also put a lot of effort into using the experience gained in the last ten years with Class D technology for further development. Also the knowledge gained from producing the tube amps from Copland helped in this process. With the UFPD 2 circuit, Primare believes to have achieved the difficult balance between amplifier and filter stage by merging the two units. The difficulties of limited and, depending on the loudspeaker, varying bandwidth otherwise often encountered with Class D amp are said to be a thing of the past thanks to this power supply design. Also distortion and noise components have been further reduced, amongst others by shortening the signal paths.

By the way, UFPD stands for "Ultrafast Power Device". In the I25's MK2 version of the power supply, efficiency was again improved upon and now reached 94%. Optimized components were specifically selected by Primare to contribute to sonic perfection. So altogether, the I25 is conceptually rather close to the 1000 Euro more expensive I35. And while the I25 lacks the symmetrical XLR input and output sockets as well as about half the watts of its big brother, it never seemed exhausted or appeared to reach its limits in our tests. Our expectations regarding the tonal merits were therefore at a high level.

When we tested the 35 amp/CD player combination back in 2019 we have criticised the fact that at the time the Prisma App didn't properly work an smartphones. After all, not everyone has an iPad or an Android pendant at home so it is fortunate to see that Primare took this issue seriously and already solved it on iPhones; a corresponding update for Android cell phones was on the way, when this article was written. Prisma still preferably uses Chromecast for Streaming, which can be considered a positive feature, depending on your point of view. You just have to be prepared not to be able to control, for example, Tidal directly via Prisma but to be instead directed to the streaming service's app.

Important side note: if you want to use Prisma, the DAC-module is mandatory. This converter module, equipped with a highly acclaimed AKM DAC, is perfectly up to date and turns the I25 into a very high-quality digital/analogue converter with four optical and two coaxial inputs as well as a coaxial output, which can be used to dramatically enhance the sound of CD players, digital radios, Blu-ray players or even television. A connection for computers is not missing either. Plugging in both the converter module and the Prisma module is done in just a few easy steps after loosening four screws, making it very user-friendly.

The handling of the I25 in general was one of its most pleasant aspects, but the Primare had also another bonus to offer. Similar qualities of sound as we had already noticed them in the I35, which tended slightly towards warmth, were also present here: Peter Gabriel's live recording of "Sledgehammer" didn't annoy us – as it often does – here but invited us to listen to the rest of the CD as well. Dynamic gradations sounded clean, even if not with the very last bit of resolution. In our listening room of almost 25 square metres the Primare easily handled all of the loudspeakers we paired with it. The bass control was good – here, the ultimate is often not even achieved in very high price ranges. Finally Anna Moffo entered the stage as Mimi for Puccini's "La Bohème". The recording from the year '61 under Erich Leinsdorf was emotionally gripping and showed the stage in all its breadth. The same holds true for Noon's "500 Miles". The bottom line is that the Primare I25 is a piece of great Swedish workmanship, that is a lot of fun in every respect.

Excellent workmanship and very versatile through optional plug-in modules. Powerful, with a slight tendency towards warmth in sound. An ideal match for the vast majority of loudspeakers. The Prisma App now also works on Smartphone. 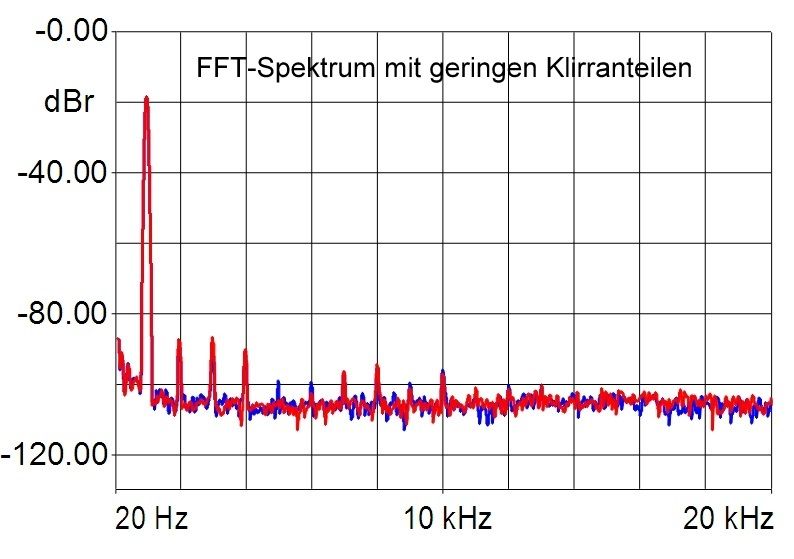 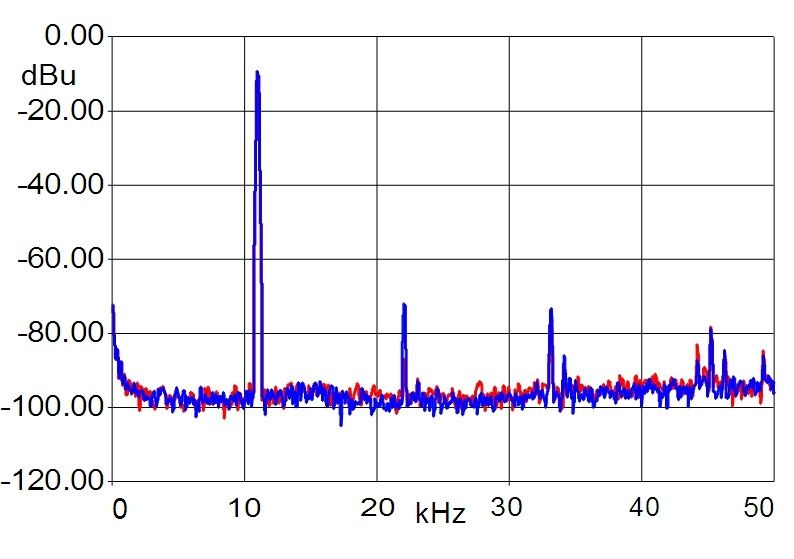 Puccini – La Bohème: The Living Stereo label established its legendary reputation with recordings like this one. The young Moffo: a great experience!