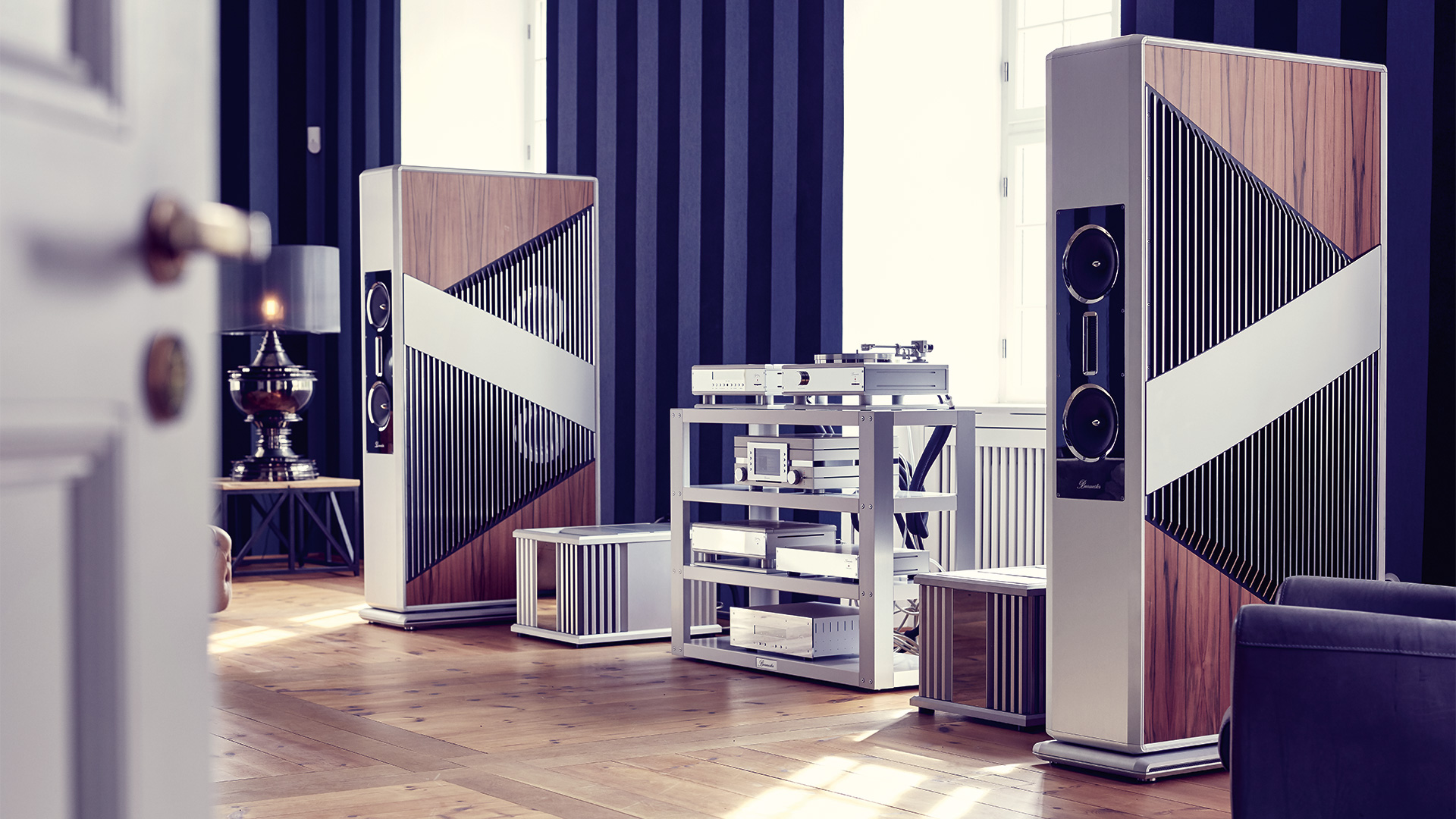 Gateway to Great Sound – For an appropriate presentation of their ultimate "Signature Line", Burmester invited us to a respectable manor in Eastern Germany. Of course, we accepted – and experienced some glorious hours of high-end audio par excellence.

As the door gently opens, it feels almost like Christmas when we were children, when we entered the living room with eyes wide open, enchanted with the festively decorated tree and the presents underneath it. However, this time we are at Schloss Groß Rietz, about 80 kilometres from Burmester's headquarters in Berlin, and here it is all about "toys for adults". Nevertheless, the feeling is the same.

The impressive 17th century estate is now owned by a tycoon from the advertising industry with a strong affinity for high end audio. He recently rewarded himself with Burmester's ultimate "Signature Line", which ranks well above their well-known "Reference Line" and currently consists of the mono power amplifier 159 as well as the almost 1.90 meter high loudspeaker BC350. Total price for the siblings: a dizzying 366,000 Euros, with the mono blocks accounting for 148,000 Euros; so the lion's share is due for the speakers!

During two HighEnd fairs we could already hear the mega system, whose origins go back to the company founder and mastermind Dieter Burmester, who died in 2015. But to experience it in the dignified ambience of the Brandenburg Baroque castle near Rietz-Neuendorf is an entirely different experience altogether.

There, the impressively looking system plays in a room of about 80 square meters with high ceilings and wooden floorboards, whose acoustics posed a great challenge to the Burmester team. In particular, they had to "defuse" an expansive modern chandelier with sound-reflecting surfaces. In some corners, small bass absorbing elements can be seen, which, however, could also be taken for furniture or living accessories by a uninitiated observer. Further, the expansive upholstery landscape has a naturally positive effect, inviting to laze about, while also and especially absorbing vagrant waves in the mid and high frequency ranges, thus reducing the reverberation time and making the acoustics "drier".

Another question that had to be answered before installing the super system was, if the wooden floor would even be able to bear its weight. For example, each 159 weighs a whopping 180 kilograms, a BC350 even more than 420 kilograms. Including the stable rack and Burmester's other "reference" components, including the "Musiccenter" 111, which complete this set of superlatives, the system adds up to about 1.4 tons. Fortunately, there is a wide staircase in the castle, by means of which the loudspeakers were hoisted up by piano carriers.

By the time the deadline is reached, the system is completely assembled, with the feet of the BC350 pointing exactly forward, while its one-meter deep cabinet – unlike shown on our picture – points slightly inwards, so that the fibreglass-reinforced papyrus membranes of the two 22-centimeter diameter mid-range drivers and the tweeter systems, each made of two "Air Motion Transformers" with featherweight, folded foil membranes, radiate slightly past a centrally positioned listener. This setting proved to be ideal for achieving a realistic reproduction of size and exact focus in the spacious listening room. This procedure is, by the way, rather simple, since the speaker can be rotated on its solid stand to save the owner from having to move around these giants.

In addition, each BC350 has a double pack of powerful 32-centimeter bass speakers on their inner flank, which appear almost like the heads of predators, locked away behind the bars of the elaborate cabinet construction. Latter is stiffened by an aluminum frame, while each bass driver is ventilated by its own reflex system, which is intended to guarantee power and control in equal measure. Noble detail: The port tubes are made of porcelain by KPM, which is the "Königliche Porzellan-Manufaktur Berlin" (Royal Porcelain Manufactory Berlin).

Rarely before have we been able to explore the "fascination of large speakers" better than with the BC350 driven from the 159 mono's. Playing a live recording by Pink Floyd, the stage actually spreads out in all directions. This system lives up to the aspiration that many have – but only a few can live up to – which is "bringing the concert experience home". We operated the loudspeakers in "live mode" for this purpose. Then, an additional AMT tweeter, adjustable in level, is activated on the top of the BC350, stimulating reflections from the ceiling and thus extending the spatial impression. Without it, the Burmester runs in "Pure Mode", which increases the edge sharpness of the musicians and singers in the always perfectly organized spectrum.

In general, the grandeur as well as the sophistication of this system is absolutely impressive, which is completely regardless of level or complexity of the music and never even comes close to losing its shape. It effortlessly reproduces the offered pieces, revealing their musical core as well as individual sound quality, impartially revealing strengths and weaknesses without, however, exposing titles where, let's say, sound quality was of secondary importance.

Instead, the Burmester always puts its focus on the music thanks to its integral coherency. These are qualities of maturity, which at the same time represent Burmester's sound philosophy at the highest level. This philosophy has always relied on attack and the immediate, captivating response of the listener, but not as an end in itself, but as a means for conveying the authenticity and truth of a performance.

We exchange these thoughts as we listen to one piece after the other on this top sound system, each of us presenting one or two of their favorite titles. And slowly but certainly we start to dare more and more and the volume moves higher and higher. But still, there's no sign of stress when Jen Chapin, accompanied only by double bass and saxophone, performs her version of Stevie Wonder's "You Haven't Done Nothin'".

The song, which was captured incredibly realistically by the New York noble label Chesky Records is played as a high-resolution 24 Bit/192 Kilohertz WAV file from a USB stick, which is inserted directly into the Musiccenter. The level is true to life. The small ensemble is virtually there with us. The boundaries of time and space, from the original to the preserved seem to be suspended. One sits there and cannot stop being amazed.

Then, as a highlight among some of the unmastered top acts of the Montreux Jazz Festival, Rachelle Ferrell's dazzling "Sister" plays. "Dazzling" can be taken literally here, as after a short intro, massive bass waves roll towards the listener, surprising the audience and probably driving most speakers to give up with fluttering bass chassis already at moderate levels. That's where Burmester's gigantic double hasn't even really started yet.

Certainly, it has got enough Power! Burmester reports about 6600 Watt of impulse power into four Ohm for their mono amp. At the same time, a damping factor adjustable in 23 steps ensures that the loudspeakers' urge to move receives the optimum dose of guidance. A specially developed analogue computer ensures in real time that each of the 52 (!) power transistors operates in the linear range.

The 159 accepts every challenge, and renders the fulminant "Sister" via the BC350 close to the "Auditorium Stravinski" in Montreux with its fine and mercilessly powerful PA, which pumped the bass thunderstorms into the hall sharp and powerful. This is exactly what the "Signature Line" does.

By this time, we've been running levels as if we wanted to make up for what wars and the GDR – "creating ruins without weapons" – were unable to do: tear down the building. Of course floor and beams were vibrating, but the Signature Line remained the strong and unwavering pillar of the enire presentation. Fantastic! Good thing the castle has no neighbours. They would have certainly been alarmed.

The rough intermezzo is over, the test passed. Despite the late hour we are wide awake and at the same time happily dazed by this magical high end moment. With wine we enjoy the ambience and the facilities in a more civilized, appropriate way, hovering, for example, on the "angel wings" of Dorothea Rauke's synth waves or letting ourselves be captivated by the intimacy of Anne Bisson. Then the gateway to great sound closes again – and it feels like being thrown out of paradise.

Even if he does not live to see their triumph, I consider the "Signature Line" a late legacy of Dieter Burmester. Without his urge for perfection as well as his desire to go beyond the usual standards, this would not have been possible.

Those seriously interested in the Signature Line can make an appointment for Schloss Groß Rietz via Burmester. An appointment at Jörg Wisseling's "Elbfidelity" in Hamburg (www.elbfidelity.de) is however easier, as it is more accessible and usually easier to reach. There, Burmester's flagships are available for listening as the only other place in Germany.

The studio is in a prime location on the Outer Alster. However, there are no general opening hours, only exclusive individual appointments. Owner Wisseling aims for the most comprehensive Burmester exhibition of the republic. He is currently preparing a room with "Dolby Atmos" technology, which will be implemented by means of nine 956 power amplifiers, three BA71 loudspeakers of the Berlin company and a dozen of their in-wall satellite speakers.

These are just a few projects that Jörg Wisseling has in mind and is pursuing with determination. So that more HiFi fans can enjoy the Signature Line, we have already considered joint ventures. Perhaps this will soon open the gate to great sound also for you.