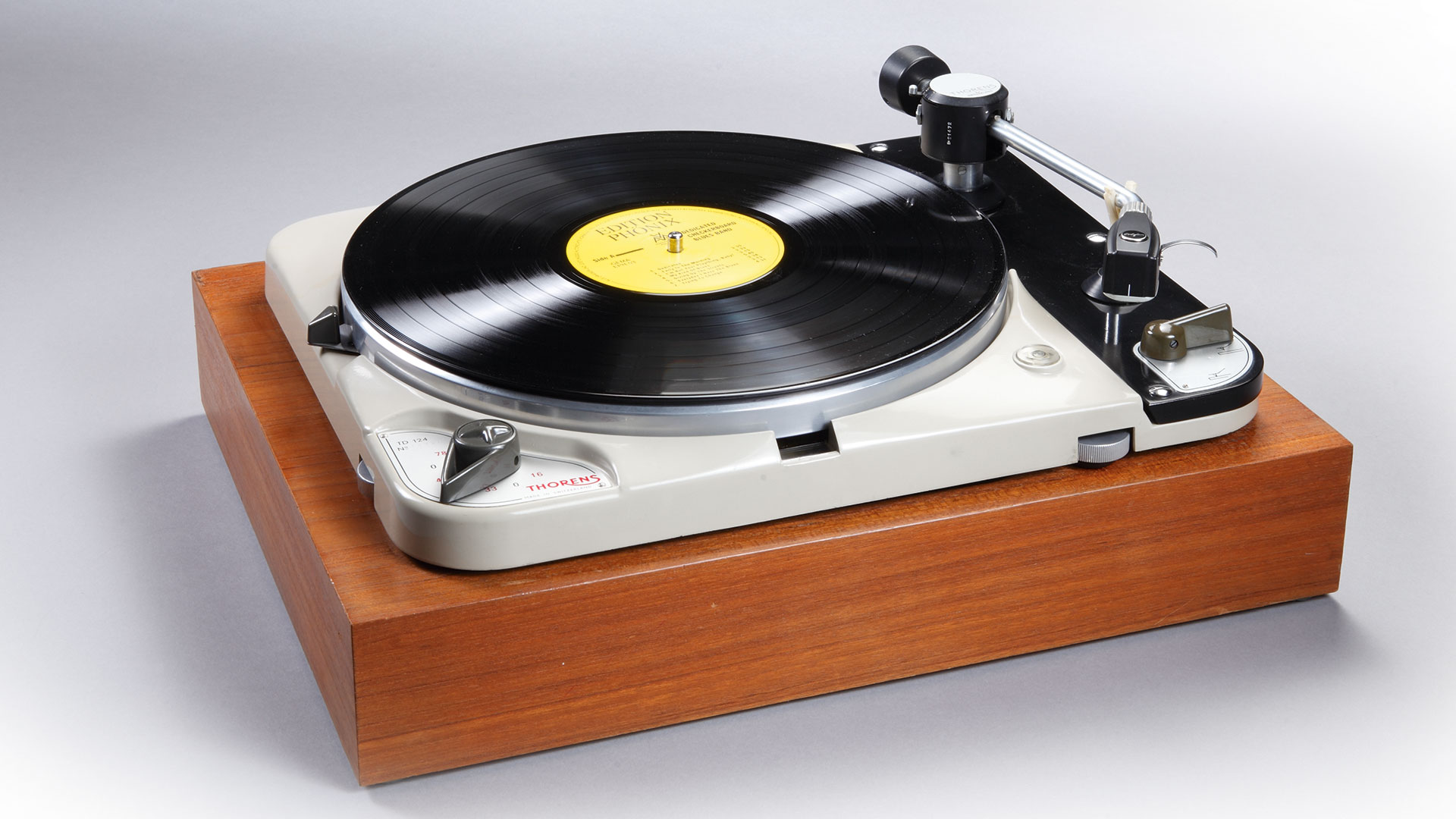 Swiss Machine – There are quite a few legendary names in high fidelity which are capable of sparking joy in the hearts of most audiophiles when mentioned. The record player we are talking about here – the Thorens TD 124 – certainly occupies a place at the top of the ranking.

What conditions must be met to be regarded a legend? In the case of the TD 124, its innovative technology is certainly the most important reason. Even in its first edition, which was built between 1957 and 1965, the 124 convinced around 60,000 customers – including broadcasters, recording studios and many thousands of private buyers. They wanted highest quality and best reliability at a reasonable price – features that the 124 offered like no other competitor at that time.

The MKII version, which was built from 1965 to the end of production in 1967, was even slightly more of a success and found an astonishing 35,000 satisfied customers in the short period of construction. The TD 124 was presented in Sainte-Croix, Switzerland, with a great deal of self-confidence. The TD stood for "Tourne Disques" = turntable, while the combination of numbers has remained a mystery to this day.

The reference to the royal motor coaches of Her Majesty did not refer at all to the prohibitive pricing of the British, but rather to the claim to produce the best that is possible. Thorens did this with a hitherto unknown consistency, though without venturing into completely unattainable price ranges. Prices at the beginning of production started at around 440 German Mark and at the end of the MK II version's production period reached around 725 German Mark including the TP-14 tonearm. By comparison, a VW Beetle cost around 5000 German Mark in the mid-1960s.

In this early period of stereophony, the Garrard 301, which drove the platter by an idler wheel, had been the standard until the TD 124 appeared. In order to leave the competition behind, the Swiss engineers came up with eleven distinct design features, some of which resulted in patents, and which were intended to give it altogether 41 advantages over the competition.

Here, we are going to take a look at some of its most striking features, as for example the heavily ribbed die-cast aluminum chassis with a total weight of ten kilogramms that provided constant conditions – an idea that came from traditional mechanical engineering.

The platter is built from two individual parts, however for a different reason than comparable designs from today. Above a heavy inner plate weighing 4.5 kilograms, rests another plate made of aluminum and weighing only 500 grams. The latter is damped by six rubber discs distributed on the heavy inner plate and is isolated from the record with a rubber mat. The cast iron inner plate provides good magnetic shielding and has a high moment of inertia, so that even mains fluctuations of up to 10% won't affect the synchronisation.

A 14 millimetre thick axle that has hardened and polished, is housed in a sophisticated bearing construction and is manufactured with an accuracy of five micrometres. The bearing clearance is between 20 and 40 µM. A pretty good strategy for low bearing noise and maximum reliability.

The motor is rather weak with its power of only ten watts. On the other hand this has the advantage that it hardly tends to vibrate, especially since it is balanced with the highest precision. It is elastically suspended from the heavy base plate to additionally keep vibrations away from the cartridge. Rubber buffers are used to decouple the complete chassis from the frame.

The two-part design offers yet another advantage: the outer platter can be stopped quickly thanks to a clever clutch mechanism, while the massive inner plate continues to rotate undisturbed. Therefore the outer plate is back at the set speed just as quickly after an interruption. A further advantage: constant temperature and lubrication conditions guarantee maximum synchronisation and speed constancy.

Maybe not decisive but still nice to have: By means of easily accessible screws, the 124 can be put into level – the built-in spirit level makes it even easier.

The concept of planned obsolescence, i.e. designing a device with a built-in expiration date, did not yet exist at the time. All components are amply dimensioned, and no expense was spared to ensure a long life for every TD 124. The meticulous final checks of every single piece of equipment – 22 alltogether –, which included the balancing of the platters and the motor, would still do credit to any modern high-end company.

Another difference to the then competitor Garrard was also the common base of drive and tonearm, which were mounted on the torsionally stiff chassis, while the Garrard separated drive and tonearm.
Still not enough special features? Well, there's still a contactless, patented speed fine adjustment via eddy current brake. Garrard also had this, but there it acted on the motor axle, while the Thorens had it acting on the step drive wheel driven by a belt. To explain the exact mode of operation would go too far here. The book "Swiss Precision" about the TD 124 and its smaller siblings by Joachim Bung, which also served us with a lot of valuable information, explains the exact mode of operation in detail Only recently, a greatly expanded new edition of this lovingly compiled work has been published.

Now let's talk about the absolute highlight of the TD 124's construction: the drive. There were already quite a few idler wheel drives around at the time, all of which had quite high rumble and other drive noises as well as less than perfect speed constancy and synchronisation, which made pianos more often than not have an unintentionally varying pitch. The idea of coupling a rubber shaft directly to the motor and platter was therefore out of the question for the Thorens engineers. Instead, they came up with a clever hybrid: The motor, softly suspended, is connected to a "step drive wheel" by means of a rather short flat belt. Of course both the pulley sitting on it and the drive wheel consist of a high-precision metal piece. In order for the belt to run as precisely as possible, the surfaces of both are curved.

The motor rotates 1350 times per minute, while the drive wheel does its job at 700 revolutions. Of course the pulley is prepared for both 50 and 60 hertz operation by simply moving the belt. The four available speeds are selected by moving the idler wheel on the different stages of the drive wheel. This wheel runs in its own bearing, which is attached to the chassis and thus, according to Thorens, "completely removed" from the vibrations of the motor. The power transmission to the inner edge of the plate is then handled by the idler wheel made of a precisely manufactured special rubber.

Our model is equipped with the tonearm BTD-12 S which is rumoured to have been developed and manufactured by EMT. In fact, the arm has been completely developed by Thorens and served as a model for EMT. They were, however, able to improve upon its quality by using different bearings and a stiffer, less resonant tonearm tube. Whether or not Thorens was aware of this and therefore planned to also equip the TD 124 with arms from other manufactures as Ortofon and SME could only be speculated about – and that is not what we are here to do.

However there is no need to speculate about a modern successor to the 124, as in a few months there will be one. An international team of developers has been working successfully on the new design, which will feature a modern direct drive  Instead of the traditionaö belt and idler wheel combination.

And what can you do if you have purchased a 124 and find the result to be below expectations despite the currently high prices on the second hand market? Right, you take it to a workshop. In this case, however, we do not recommend any "normal" workshop, because things are not that simple here.

Worldwide there are a few specialists, who take care of restoring and repairing TD 124s – sometimes even to a point where they are better than they have ever been. We have visited of Jaap Pees from Hanze-HiFi in the Netherlands, who is one of these experts. He even remanufactures some spare parts and is able to tune the motors to minimum resonance, offer better power supplies and check all parts for compliance with the factory specifications as well as replace them if necessary. His work has two disadvantages: it takes time and is not particularly cheap. However, the result – as we could witness with our 124 – also makes a very audible difference.

Jaap Pees is regarded an absolute authority in all matters concerning the Thorens TD124. During our visit we not only had the opportunity to pick up our restored 124, but could also witness personally the Dutchman's care and knowledge and got to know a very likeable man who is passionate about analog audio and precise workmanship.

Book Recommendation for the TD 124

Nowadays, there is quite a lot of literature on hi-fi classics available. However, what Joachim Bung presents here as the third, greatly expanded and updated edition of "Swiss Precision" exceeds all expectations. He has prepared the history around the TD 124 in an extremely meticulous manner with almost obsessive attention to detail. He interviewed the remaining witnesses to this chapter of industrial history and explains the topic in a technical as well as cultural and economic context, including competitors such as Dual, Lenco, PE or Garrard, and presents collectors and service points along with important addresses. The work is of the greatest interest both as a book for reading and as an anthology, and is immensely instructive, fascinating and exciting for the Thorens fan. There is no one – including us – who after a more than superficial immersion in the lush five-kilogram heavy book project that is delivered in two volumes, wouldn't be interested in a classic Thorens TD 124. Nevertheless, this masterpiece, to which our publishing house with our extensive archives could even make a small contribution, appeals to an audience far beyond the Thorens fan community. A huge and honest recommendation! "Swiss Precision" is only available directly from the author and it costs around 200 Euros. www.joachim-bung.de