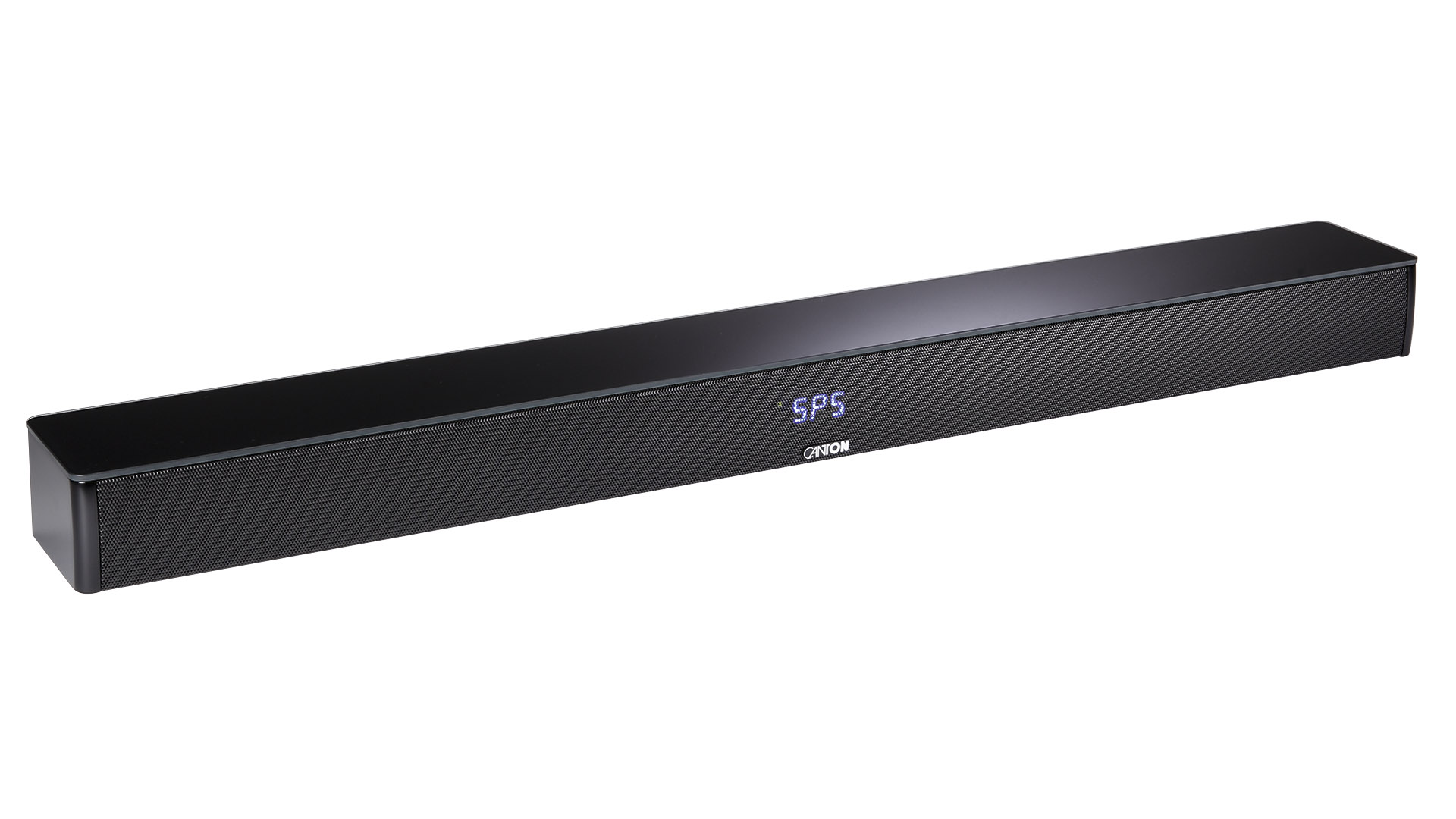 The Smart German – Integrated into Canton's "Smart" concept, the "Soundbar 9" shows what outstanding sound is possible at a price point of just 700 Euros.

As a fan of home cinema and after I recently experienced the equally expensive Sounddeck Canton DM-101 from the previous generation and its astonishingly mature sound at a good friend's place, I was especially curious about the Smart Soundbar 9 – notwithstanding my limited experience in this field.

With a width of less than 90 centimetres, a height of only seven centimetres and a depth of ten centimetres, the Canton Soundbar, which is covered by a robust glass plate, is relatively compact. However, five kilograms in weight reveal a certain solidity and – yes – an abundance of features.

Protected by a metal grille, there are ten loudspeaker drivers on the front of the soundbar, eight of which are active. The two flat oval membranes flanking the display with an edge length of up to almost 15 centimetres are designed as passive drivers. That means they support the four long-stroke 50 mm drivers for the low frequencies just like a bass reflex port would, however without any airflow noise even at heavy volumes.

An opulent 300-watt amplifier unit in cooperation with a Digital Signal Processor (DSP) and cleverly set limiters ensures punch and level stability – we are not used to anything less from chief developer Frank Göbl. This allows for powerful reproduction down to about 50 Hertz. Respect!

Two additional 50mm drivers with aluminum diaphragms are responsible for the mid-range and two 19mm fabric domes on the outside of the cabinet for the high frequencies. For stereo this is perfectly sufficient, especially since the virtual surround of the Canton is well designed. If you want real 5.1, you can and should take a look at the other options of the Smart series (cf. our Reviews of the Smart Vento 3 and the Smart Vento 9). A Dolby Atmos capable "Soundbar 10" (900 Euro) has already been announced at the time of testing.

For wall mounting it's great that the connection panel is recessed for easy cable connection and is also accessible from below – who hasn't been annoyed by the fiddling with the connection of a TV? The HDMI connections are suitable for 3D and 4K. An optional subwoofer is connected at 100 Hertz. A USB interface should be on board of the TV set, Blu-ray or media player anyway.

The most common and popular connection types are probably Bluetooth and WLAN anyway, because thanks to Spotify Connect and Chromecast Audio – which is incredibly easy to integrate via Google Home – the Canton can stream audio from streaming apps such as Qobuz, Deezer or Tidal as well as Spotify and can thus be controlled and fed via smartphone or tablet app.

In general, the operation is just great, with the generous display providing all the necessary information. In addition to special operating modes – such as "Movie" with a significantly enlarged stereo base – even lip-syncing or equalizer settings are possible. The remote control is adaptable and also controls the television.

From previous tests, we still had some other Canton Smart siblings available to us. Used in combination this was a significant improvement in terms of home cinema, but the virtual surround effect and the balanced stereo sound of the Soundbar alone were already astonishingly well done, with the stage extending far to the sides, although the rear information being practically absent. With the Blu-ray player in action, the Soundbar 9 presented itself as a big first step into the world of home cinema.

The tonal presentation of the rather compact bar astounded the testers beyond all measure. Whether "Jumanji", "Wonder Woman" or music by Kraftwerk – the Canton always did its best, with pressure in the bass, strong dynamics and speech intelligibility above average. Compared to the precise "Stereo" sound, the "Movie" setting provided a wider, more diffuse and three-dimensional sound backdrop. The "Music" mode was somewhere in between. We are properly impressed. Price tip!

Multiroom, streaming, virtual surround and dramatically better TV sound – what more could you want? How about future-proof expansion options, good stereo sound also for music and excellent operation at a more than fair price? Then you've come to the right place with Canton. Despite its compact dimensions, it is powerful, especially for movie sound, even without a subwoofer. The speech intelligibility is excellent. A huge enrichment for the TV evening that is better than many multiroomer speakers – although the good stereo system remains unbeaten.

Of course, the Canton soundbar can be supplemented with an active subwoofer such as the Smart Sub 8 (600 euros). And of course, such a sub improves the overall quality of the reproduciton. Nevertheless, the question arises: do you need it? The home cinema fan, who may also be interested in the further expansion options of the Smart series (e.g. Smart Soundbox 3), might answer differently to this question than a fan of interior design, for whom the ambience of his home is the most important thing. The Canton soundbar alone already convinces with its very good surround and bass competence. It is therefore always possible to rely on it first and then to consider an extension later if the need arises.