After the melodious appetizer AM5, Canton also activated its successful Vento series. And the Smart Vento 9 has much more to offer than „just“ power amps.

Basically, anyone who knows how to build passive speakers could also build an active one: take a driver, through in some power amps and you‘re more or less done. However, if you want your construct to also have a decent sound, it is a whole different story. Anyone who has experienced how differently a loudspeaker sounds when coupled with different amplifiers has a rough idea of how complex the relation between mechanics and electronics really is. And, in fact, this is precisely where the strength and consistency of active concepts ultimately lies: as soon as a matching setup is found, there is not much that can go wrong at a customer‘s home.

Contemporary „digital speakers“ with their chip-controlled brains even take it one step further. Their algorithms already separate the signals according to frequency ranges during binary processing, allowing them to control bass, midrange and treble drivers without the detour of a phase-rotating crossover. Further, developers know the limits of their drivers. The ultra-fast DSPs can intervene long before the loudspeakers exceed their limitations. Well-programmed active drivers can therefore make optimum use of their power spectrum and handle even high levels without distortion.

Canton‘s new Smart Vento 9 is one of those arithmetic artists, and in fact it unites all the strengths of a great active loudspeaker: it radiates pure musicality from top to bottom and plays with such phase accuracy that its stage image is given a beguiling depth and sharpness. Also it has such immense power that its auditorium frequently feels like being struck by the incredibly strong impulses... Strike!

“Just“ bringing another active speaker onto the market would have been too boring for the engineers from the Taunus in Germany. The developers imagined a real-life living room and projected into it those protagonists who currently play an important role in consumer electronics. These no longer are predominantly CD players. The new partners are televisions, BD players, streamers, game consoles and smartphones.

No problem for Canton. The manufacturer has years of experience with soundbars and has plenty of electronics that can handle the new requirements. Which is exactly what makes the new Vento 9 so „smart“: in very simple terms it could be described as the largest and most hi-fi sound bar on the market!

However, let‘s quickly forget the term „bar“ again. The spectacular frame of the Vento 9 is formed by a large stereo floorstanding speaker based on the proven Vento pattern: three ways with ample diaphragm surface, a downfire reflex opening that ventilates the decoupled foot as well as a cabinet construction that is stiffened by every trick in the book and contains a lot of mass. Its rounded flanks minimize reflections and resonances inside. The idol was the 896.2 (see box). In this 27-kilo construction, the team around head of development Frank Göbl laced four separate Class D power amps into each of the 27-kilo constructions, which together deliver an official 600 watts – you remember that we mentioned being struck by the the sheer power?

On the connection side, the Vento is more flexible than almost any other active speaker: the left speaker is designed as the master. It has Bluetooth, a USB port for computers, an analogue stereo input as well as optical and electrical S/PDIF. The signals are transmitted to the right with perfect accuracy via a digital output.

An unobtrusive display in the lower third of the cabinet facilitates menu navigation. However, since it‘s a three-digit seven-segment display, you have to learn a lot of abbreviations. The picture shows the mid-range control (MID) and the speaker setup (SPS). It is, however, not as bad as it sounds: after the initial setup you practically don‘t need the menu anymore.

Alternatively, the second loudspeaker can also be integrated wirelessly via high bit radio signals. Apart from USB and bluetooth, it also has the full connection array at its disposal. If you like it traditional, you can use the individual balanced analog inputs and feed the Ventos like any other active device. By the way, the „Smarties“ are not limited to stereo operation: together with the compact Smart Vento 3 and various sound bars from the manufacturer, you can combine them into 5.1 sets. Even 3D audio including Dolby Atmos is supposed to be possible.

The electronic brain of the speakers is no less versatile. Thanks to its preamplifier, the Smart Vento can be controlled in level – even via remote control – enabling it to be powered directly from sources. For more fun with videos, Canton implemented modified versions of its soundbar sound programs. The „Movie“ mode, for example, enlarges the image by simulating surround sound and increases speech clarity during movie playback. This emphasis is even stronger in „Voice“ mode, which raises dialogues by a few decibels. If you have ever unsuccessfully tried to follow the dialogue of a movie without waking half the neighborhood, you will love this feature!

If it is not possible to place the speakers symmetrically in the room, the setup allows the compensation of level differences and transit time. Of course, the Ventos also sounds best in a stereo triangle, however „smart“ also means that the speaker has the necessary degree of willingness to compromise. This includes a flexible and properly designed sound control system that integrates not only treble and bass, but also  midrange. As the included remote control has direct access to important sound parameters you won‘t have to search through the depths of the menus every time. Further, you can save up to three presets that recall entire parameter sets at the touch of a button.

Since we focuse on music playback, the Vento was usually running in linear stereo mode. The first thing we noticed there was the huge stage image. Similar to the incredibly musical heavyweight Reference 8K, the spherical Smart-Box didn‘t seem to care at all for the physical limitations of our listening room.

Of course, the positioning of the speakers as well as their angle play a role here as well, but orientation towards the listening position in particular did not seem to have a great effect on their plastic depiction. Much more important was the distance to the wall. The Vento has a voluminous and powerful character and it – correspondingly – demands a certain distance: 70 centimeters at least. It thanks this space with earth-shattering impulses, which are always completely under control. We found a fascinating example in Leonard Cohen‘s „You Want It Darker“, which combines a grumpy electric bass with Hammond organs, floating choirs and an electronic bass drum that sounded unbelievably punchy and appealing over the Vento, but didn‘t have the slightest hint of  unwanted resonance. “Number 9” blows bass impulses into the listening room with perfect dryness. Cohen‘s vocals remain completely unimpressed, standing unshakable and with fantastic presence between the speakers. You‘d have to be properly cold-blooded in order to not immediately cheer up in view of this smart entertainer‘s performance!

Canton continues with their successful activation, adding many intelligent features to its "Smart"-series. The active Vento 9 has an incredibly powerful and present character. 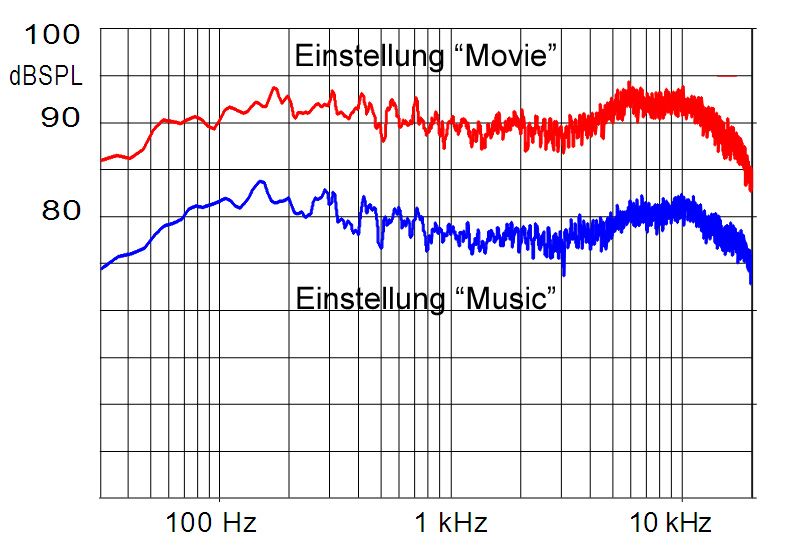 Linear frequency response and high level reserves. Since the Vento's DSP causes latency, we had to measure with noise signals to compensate for room influences.

Apart from its terminal and display, the cabinet of the Smart Vento 9 is identical to the Vento 896.2. The driver configuration is also the same: basses and mids are based on titanium diaphragms, while the tweeter is made of ceramic. However, sound comparisons between the siblings are tricky. They have the same dynamic, powerful character and velvety fine, never annoying tweeter.

However, we were unable to find an amplifier that would allow a well-founded A/B comparison with the integrated power plants of the smart Vento. Although the passive is more flexible, as you can fine-tune its sound via the amplifier, none of our test amps reached the bass control and performance of the smart Class D power amps.