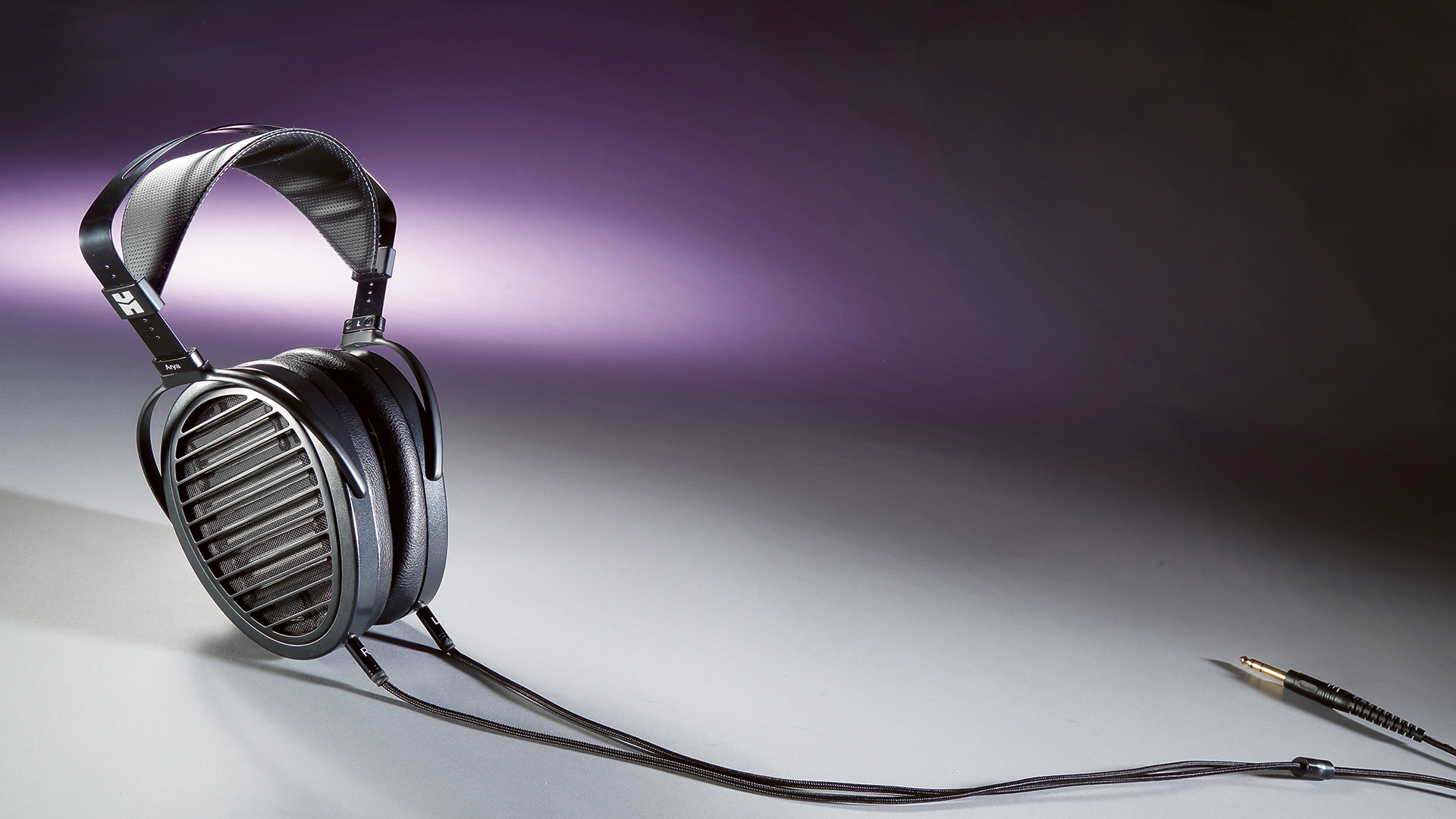 The HiFiMan „Arya“ doesn‘t conform to the trend and only sounds brilliant with a proper amplifier.

Many of our contemporaries have long been asking the question as to who originally came up with the, in their opinion, abstruse idea of trimming high-quality headphones which are intended mainly for use at home to make them suitable for mobile devices? Can you remember ever having met someone on the road or while travelling by bus or train who was wearing high end headphones costing several hundred Euros for his journey from A to B?

It thus seems only natural that the US manufacturer HiFiMan should now present a headphone costing around 1800 Euros and label it „not suitable for mobile devices“. After all, the Arya has all the ingredients and characteristics that count in a high-quality system – and it has been consistently developed specifically for this task.

It weighs around 400 grams, despite its lightweight bracket construction. The fact that it did not reach a real light weight is the result of the very elaborate construction of the driving magnets, which HiFiMan calls „asymmetrical magnetic structure“. Towards the ear the Arya works with smaller round magnets, towards the back with larger rod magnets to drive the foil, which is only a few nanometers thin. To demonstrate the kind of dimensions we are talking about here: one nanometer is 1/1,000,000 mm, or in words one millionth of a millimeter. For comparison: a human hair is about 0.04 to 0.06 mm thick. The reason behind all this effort: the extremely light foil can react quickly and undistortedly to impulses of any kind, and the shape of the magnets ensures that the sound reaches the ear of the music lover as unaltered as possible.

The approximately 100 employees who research, develop, present and ultimately also manufacture new models at an almost incredible speed in Tianjin, China, under the direction of Dr. Fang Bian gave their youngest offspring even more than the bracket construction and the exclusive magnet system which were already familiar from the xV2 model. The interchangeable ear cushions consist of a combination of imitation leather on the outside and skin-friendly polyester-covered imitation leather on the inside. The leather is perforated so that it doesn‘t get too warm for the ears even when worn for long periods of time. The oval shape of the cushions, which completely cover the ear and distribute the pressure evenly, is pleasant to wear. The price for a pair of spare pads is 99 Euro. The 1.5 meter long cable of the open earpiece is of good quality and reacts insensitive to touch. HiFiMan speaks of four-wire „monocrystalline copper“. Two small 3.5 mm plugs, unfortunately not marked in colour, are plugged into the shells, while the connection to the amplifier is made via a classic 6.3 mm jack. The impedance of the headphone is 35 Ohm, the efficiency is specified by the manufacturer at 90 decibels.

Not for on the go

This information seems to us to be very close to reality, because compared to the model „Ananda“ of the same manufacturer the Arya is a lot quieter. On our Exposure XM HP both can be operated and compared in parallel. The Arya quickly set itself apart from its little brother, which costs around 1000 Euros, presented voices from Frank Sinatra to Tori Amos not only much more airy and richer in detail, but also achieved the rare feat of being able to offer additional attention to detail despite warmer tuning. Absolutely amazing how the Arya played Marianne Faithfull‘s version of Bob Dylan‘s „It‘s All Over Now, Baby Blue“.

The artist‘s experienced, brittle, scratchy voice was reproduced with extreme sensitivity, the bass drum with authority and the necessary pressure, yet clean and with finely drawn swing. Even in comparison to Sennheiser‘s HD 820, which is appreciated by professionals as well as audiophiles, the HiFiMan wouldn‘t back down and stood up to the 2400 Euro expensive German headphone. Not only that, but depending on the music material the Arya was sometimes even ahead. Impressive was the lightness with which the US-Chinese unravelled complex bass passages without ever giving the impression of it being „too much“.

Also with classical music the Arya didn‘t show much flaws – orchestras perhaps sounded a bit too warm overall, but it was still a long way from discolouration. Rather it provided for a very pleasant long-term effect. Especially early digital recordings of Karajan profited from it, as they were taken away a piece of their harshness and aggressiveness, which made them audible again, without becoming softened.

Also the interesting CD „Out“ by Feline Lang – no, there is no relationship to the author – delighted with its powerful, natural sound with distinctly good and convincing dynamic abilities. The bass is also powerful here, yet loosely springy in the manner of a gifted dancer, which was nice to hear on „City By The Sea“. Voluminous and powerful, yet open, airy and not too sticky or thick – in this area the Arya moves skilfully and with highest elegance. If you think about what you can get for less than 2000 Euro and dare a comparison to the field of loudspeakers, you can‘t help but praise Dr. Bian and his team for a headphone that plays honestly and emotionally and appeals to all senses.

Open planar magnetic headphones that have deliberately been designed for use with high-quality stationary equipment. They sound powerful, voluminous and are tuned with a touch of warmth. High wearing comfort. Weight: 400 grams.

Feline & Strange – Out: Fine music that skilfully balances between styles and genres and also surprises with a pleasant sound.