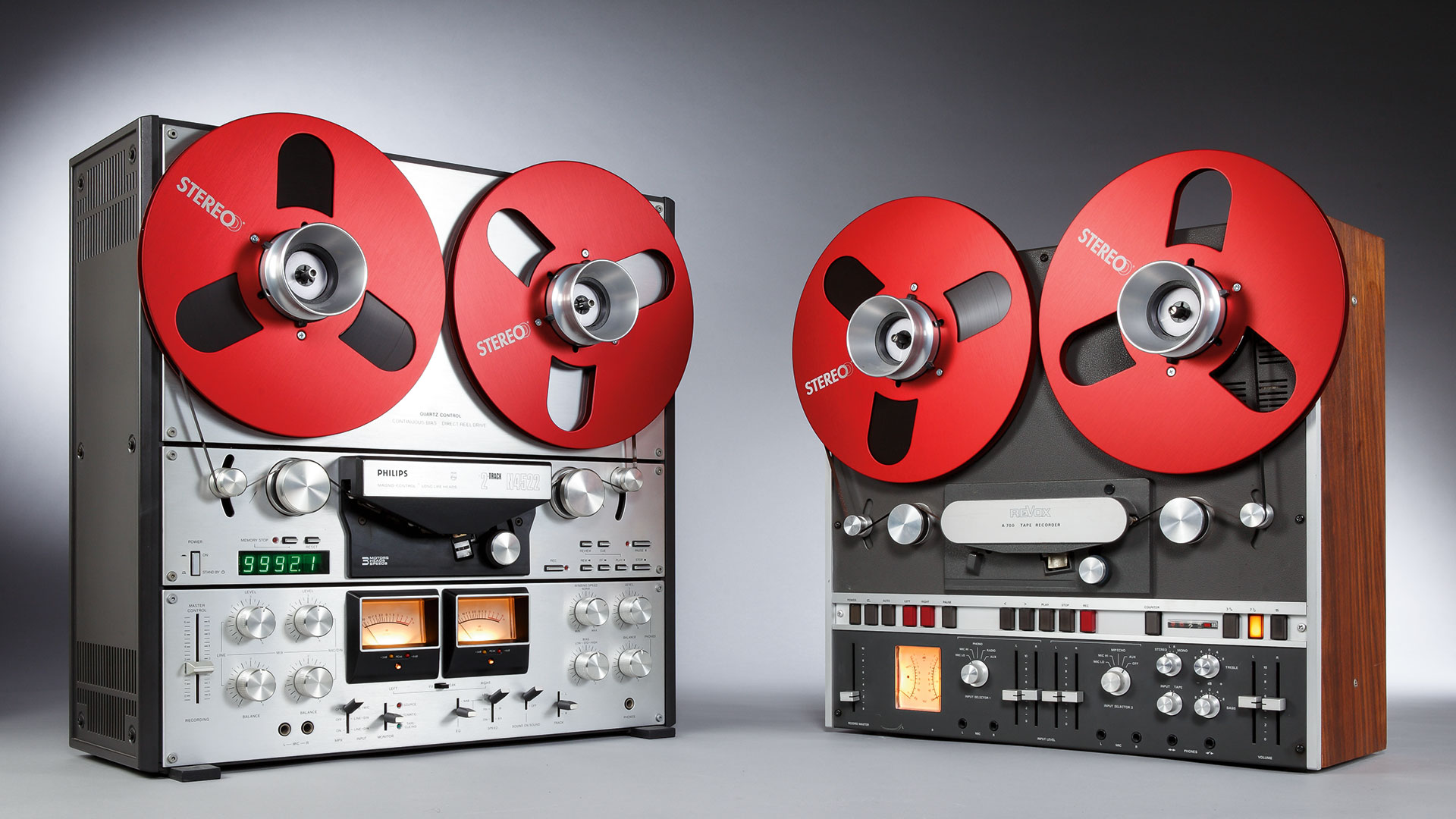 Is reel to reel just the next retro hype or does it have a current raison d‘être? STEREO took a close look at two heroes of old.

For quite some time now, turntables have returned to the public sphere, with sales figures for new as well as used equipment remaining at an astonishingly high level. Now, what seems to be yet another anachronism has been reappearing from cellars and closets everywhere. The dinosaur amongst retro hifi is experiencing a renaissance. Reel to reel is back!

We have chosen two exquisite representatives of the European reel-royalty: the Philips N 4522 from the Netherlands and the somewhat older and in many respects serving as a model Revox A 700 from Switzerland.

Both machines stand out from the wide range of products on offer at the time for several reasons: the extremely complex drive with left and right tape calming rollers suitable for 26 cm reel sizes, the built-in mixing console and, last but not least, the three tape speeds of 9.5, 19 and 38 centimeters per second. Although there were competitors with three speeds, such as the ASC 6002/6004, the Tandberg 10 X or the Technics 1500 and 1700 series, these were the exceptions in the semi-professional sector. In contrast, the low-cost devices targeted at home appliance, usually only accommodated coils up to 18 cm in diameter and also offered 4.75 cm/s speed. Since the highest possible sound quality, long durability and the possibility of cutting ribbons were required, we took the two-track versions.

The usefulness of three speeds can be discussed since, for various technical reasons, optimum adjustment is only possible for two speeds at a time. The slowest speed was never used seriously anyway. At best it was sometimes used for voice recordings.

We were particularly interested in how the two machines, which are, in fact, quite similar in appearance would differ when used. In the late 70s Philips had a reputation for building inexpensive, good sounding plastic-devices for the home. It was, therefore, all the more astonishing that the Dutch made this very solid machine with equipment that made sense for the semi-professional sector and a very sturdy construction. Presumably for image reasons and because they could afford it financially, they used their four-track 4520 and two-track 4522 to launch an attack on the Swiss studio equipment supplier Revox which presented a derivative of the studio machine B 67 with the A 700. The Revox’s heritage from a studio-environment can be recognized by a few small details: the drive keys are illuminated, so that you can hit the right button even in dim recording-studios. Further, even inexperienced users can thread the tape straight away on the Revox, while the Philips can wrinkle the tape due to the hard edge of the head shield. The tape also easily slides underneath the sensor lever.

What you should absolutely avoid, as colleague Ulrich Wienforth already stated in the Philips test in 07/1980, is to just loosely tie the tape around the spool and then fast forward. The 4522 “rewards” this trick with too much tension on the tape, which causes the it to tear. Other negatively noticed features: a very slow end switch and tiny control buttons, which, to top it all off, also have knobs directly underneath them, e.g. for the bias. Everything other was perfect: the tape counter calibrated in minutes and seconds with a zero stop device, the microphone inputs, the headphone output with separate volume control, the possibility to adjust the bias and the tape sensitivity, the automatic monitor switch, the built-in mixing console and the VU meter that can be switched to peak value display, and, last but not least, the switchable equalization from IEC to NAB at 38 speed.

The internal design is also convincing, starting with the directly driven DC capstan motors. The clamping mechanism for the coil lock is made entirely of metal. All switches and regulators still make a good and smooth-running impression after almost four decades. Woelke‘s soundheads are longlife specimens and can hardly be broken. If necessary, you can have them overhauled. Only in terms of its plastic exterior does the Philips lose to the Revox with its metal cabinet and wooden side panels.

What advantages does the competitor from Switzerland, which was presented as early as 1974, have on offer you ask? Well, the to this day trouble-free supply with spare parts is certainly a big plus. Our A 700, for example, needed quite a bit of care before it could be used again: various capacitors had to be replaced – a typical Revox issue. The broken VU meter was rather tricky: this is quite unique with the A 700, because both gauges are in the same enclosure and indicate in opposite directions. So unfortunately it can not be replaced by any standard replacement part. At Revox the brand new unit costs a good 200 euros. Not cheap, but this way the device remains fully operational.

There are also sound heads, pressure rollers, belts, brake tapes and just about every other part to be found either new from Revox and some specialists or on the second-hand market. Even a wired remote control and an external speed control are occasionally available in the „bay“ at moderate prices. Rather rarely one discovers a separate unit for slide control. Another very positive aspect is that many components are service-friendly and mounted on pluggable circuit boards, so repairs can be made quickly. Comprehensive adjustment possibilities for the adaptation to any kind of tapes by means of trimming potentiometers also show the descent from the studio professionals. The fact that the A 700 was developed a few years before the 4522 is most obvious from the counter: calibrated in minutes and seconds, it is purely mechanical, while the Philips is digitally illuminated. If you want to modernize the Revox, there are conversion kits available.

Revox was the first manufacturer to try quartz-controlled drives – and was successful. As our colleagues at the time stated, all measured values were at the limits of what was possible. While the Philips supports the vertical installation, which is very common in the private sector, with increased stability by means of rustic outriggers, the Revox clearly prefers the lying position. What makes the Revox quite unique is its complete preamplifier including phono MM input. As far as we know, another unique feature for a two-track unit is here the possibility of connecting four microphones at once and mixing them with each other – or any other connected source. This is already kind of on the level of a small recording studio, especially since transformers were used for balanced operation – despite jacks. The double headphone outputs also allow a second person to follow the sound up close. It‘s nice to have the option of rewinding briefly and immediately switching to „Play“ mode when the button is released. A typical Revox feature is the non-locking pause button. You don‘t have to like it, but you can get used to it.

The running noise of both devices is very low, even transformer hum or other mechanical noise is kept within very narrow limits.

People who have never had anything to do with a reel to reel machine will first have to get used to the time-consuming procedure of inserting the tape. And as if that wasn‘t enough, those who want to make recordings have to intensively research the subject of „choosing the right tape material“, the appropriate setting of the device, the desired tape speed as well as the output.

Yes, it takes time, and admittedly it is rather expensive, but for everyone that has a passion for fine but robust mechanics in combination with a lot of electronics it is certainly worth a try. The mere awareness of having mastered a technique in which the majority of contemporaries are helpless and shrug their shoulders should be enough satisfaction for the “open reel enthusiast“.

For the music-“gourmet”, however, the real incentive to make friends with this complicated and, admittedly, quite maintenance-prone technique only becomes apparent once one has had the pleasure of listening to a master tape or at least an early copy of one. Full dynamics, no crackling, instead powerful reproduction of all frequencies, without any microphone effects, no problems with treble, no recurring doubts as to whether all parameters decisive for the sound are perfectly adjusted. This is a fine thing in the sense of natural and neutral sound, but it will disappoint all those who lack something if they can’t regularly change adjustments. What is perfectly adjusted on a reel to reel remains unchanged for years. Only the cleaning and demagnetization of all parts coming into contact with the tape requires regular maintenance.

Yes and no. Even though the Philips does sound a bit more open after perfect calibration, both for self-made and external recordings, and although some equipment details are very practically designed on the Dutch machine, the Revox convinces with its well thought-out design and trouble-free spare parts situation. And of course it is clear to us that the optics can also make or brake a deal...

Revox A 700: as Two- and four-track Version available