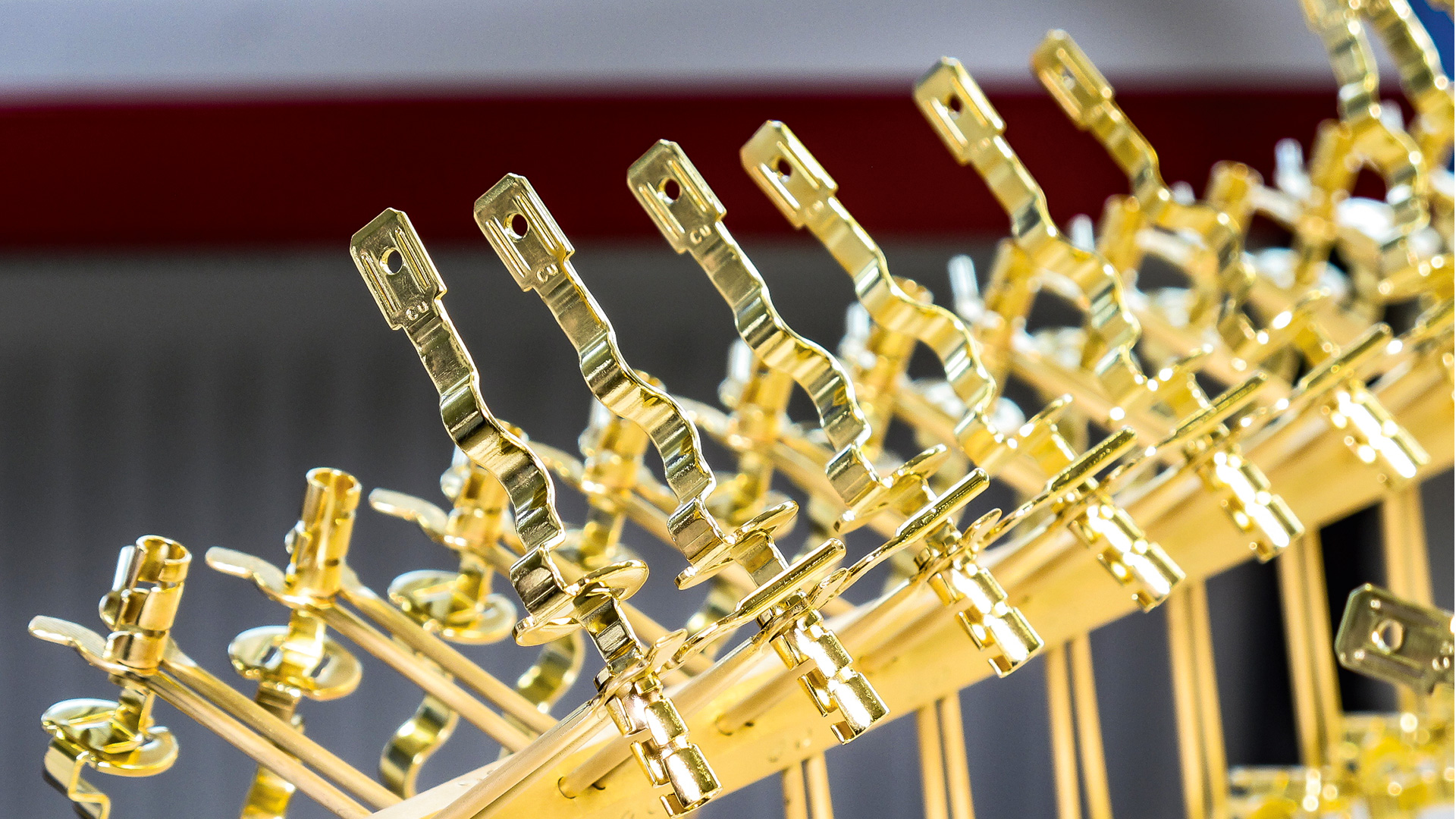 WBT, the specialist for connectors from Essen, Germany has recently started coating its high-end plugs and sockets with gold atoms using a plasma current. A fact that is, at best, worth a side note? Definitely not!

Since its very beginnings, WBT has had difficulties attracting the attention of the hi-fi community to its products and innovations. Often dismissed as a triviality, the Essen-based company refined its diverse plugs and sockets into high-precision, state-of-the-art high-tech gems that meet audiophile requirements. The best example of this development is WBT's "Nextgen" line, which uses constructive tricks and a combination of metals and plastics to reduce eddy current and memory effects, thus making a significant step forward in terms of sound quality.

Recently the team around company founder and "contact person" Wolfgang B. Thörner surprised with the announcement that, first for their Nextgens and later for all conducting metal parts, they would abandon the toxic, environmentally harmful and energy-intensive electroplating process for applying the protective gold layer around the copper strands and instead rely on the much gentler, resource-saving and even qualitatively superior PVD technology.

With the "Physical Vapour Deposition" procedure the coating is applied without chemistry and acid bath, instead using a plasma mist of gold atoms. These are released from a solid gold block by electron bombardment of a strong microwave radiation, then pass through a vacuum and finally settle on the copper parts guided by a magnetic field. This is supposed to deliver more direct, better structured and denser results than possible with electroplating, allowing a thin coating with an explicitly homogeneous surface. WBT currently speaks of 600 to 800 atomic layers.

The gold atoms are also more firmly anchored to the base material and more resistant to abrasion. Here, Thörner relies on the Van-der-Waals forces, which ensure an increased cohesion of the particles when atoms closely approach each other. Using the PVD process the atoms sit closer together than with electroplating.

Of course the Germans could have relied for all eternity on the worldwide proven and common electroplating process. In addition to the environmental aspects mentioned above, Thörner however also hoped that PVD would allow further progress in the quality of his connectors, which before had been fully optimized in most areas – including a further increase in sound performance.

However, the road to success was lengthy, arduous – and expensive. Five years of experimenting, rejecting and restarting as well as two million Euros were consumed by the investment in the new production line, the highlight of which is the man-high vacuum chamber of the PVD plasma machine.

Before this final step can begin, there are, however, extensive preparations necessary. For example, the copper conductors must be perfectly clean before coating. For this purpose, up to 51 of them are placed on stainless steel supports and cleaned in a high-current polishing bath filled with salt water. In contrast to physical polishing, the tips of the material are not folded, which causes disturbing inclusions, but rather cut.

After 90 seconds at 300 volts and 250 amps the salt water residues must be separated, which is done using a spray of alcoholic solution. Nozzles then dry the surface with warm compressed air.

Since the sputter-system is equipped with six carriers at the same time, there is a bit of a waiting time. During this period, a climatic chamber protects the shiny parts from fresh oxidation at a temperature of around 40 degrees Celsius and an extremely low humidity of less than two percent.

When the finished coated parts come out of the sputtering process they can be processed immediately, i.e. encapsulated with plastic insulators, packed and shipped – ready for installation in many of the best components and loudspeakers on the market.

Demanding hi-fi and high-end fans immediately register when WBT's normal, but above all top-quality and expensive Nextgen plugs and sockets are installed, indicating that the manufacturer is serious about sound quality.

To minimize the loss of valuable gold, WBT occasionally sends the mud that forms at the bottom of the cleaning bath, through which up to 2,000 conductors pass every day and which contains copper and gold from the reused carriers, to a separation plant that recovers the materials.

Optically only insiders can see the difference between electroplating and PVD. However, anyone can hear it! For the check two absolutely identical HMS Suprema LF cables were fitted with WBT's Nextgen Cinch connectors, which differed only in the coating process.

The story as well as the technical challenges around "WBT Plasma-Protect" are unquestionably impressive, indeed, fascinating. However, what counts in the end is the musical result. Of course we think the environmental aspects to be great, but we also wanted to know whether the sputtering process would manage to further improve WBT's "Nextgen" line, which was already ranking at the top end of the quality range.

From HMS we ordered two identical sets of the top "Suprema" NF cables  (assembled stereo-meter around 2100 Euro – WBT hat not increased the prices), which were identical including the Nextgen plugs. The only difference was that on one set the contact pieces had gone through the previous galvanic process, while on the other the contacts came from the new PVD process. To avoid further cables, we connected T+A's MP3100HV media player with their large integrated amplifier PA3100HV so that only an additional loudspeaker cable was needed.

Anyone who thought that the differences could only be "superficial" was quickly taught better. A challenge for every chain is the high bit file (24 bit/192 kHz) of an orchestra, shimmering in colors, which plays the second movement of Debussy's "La Mer". With the PVD connectors, the concert hall seemed to be acoustically more deeply illuminated, the music groups moved further away from each other so that the three-dimensionality became clearer. There was more light, air and complexity in the performance.

This was also the case in the tingling beginning of "I Remember Clifford" by the Beets Brothers and Hans Dulfer, which also played as a 24/182 file. The applause tickled even more beautifully, the saxophone breathed softer. Conclusion: 2:0 for PVD!