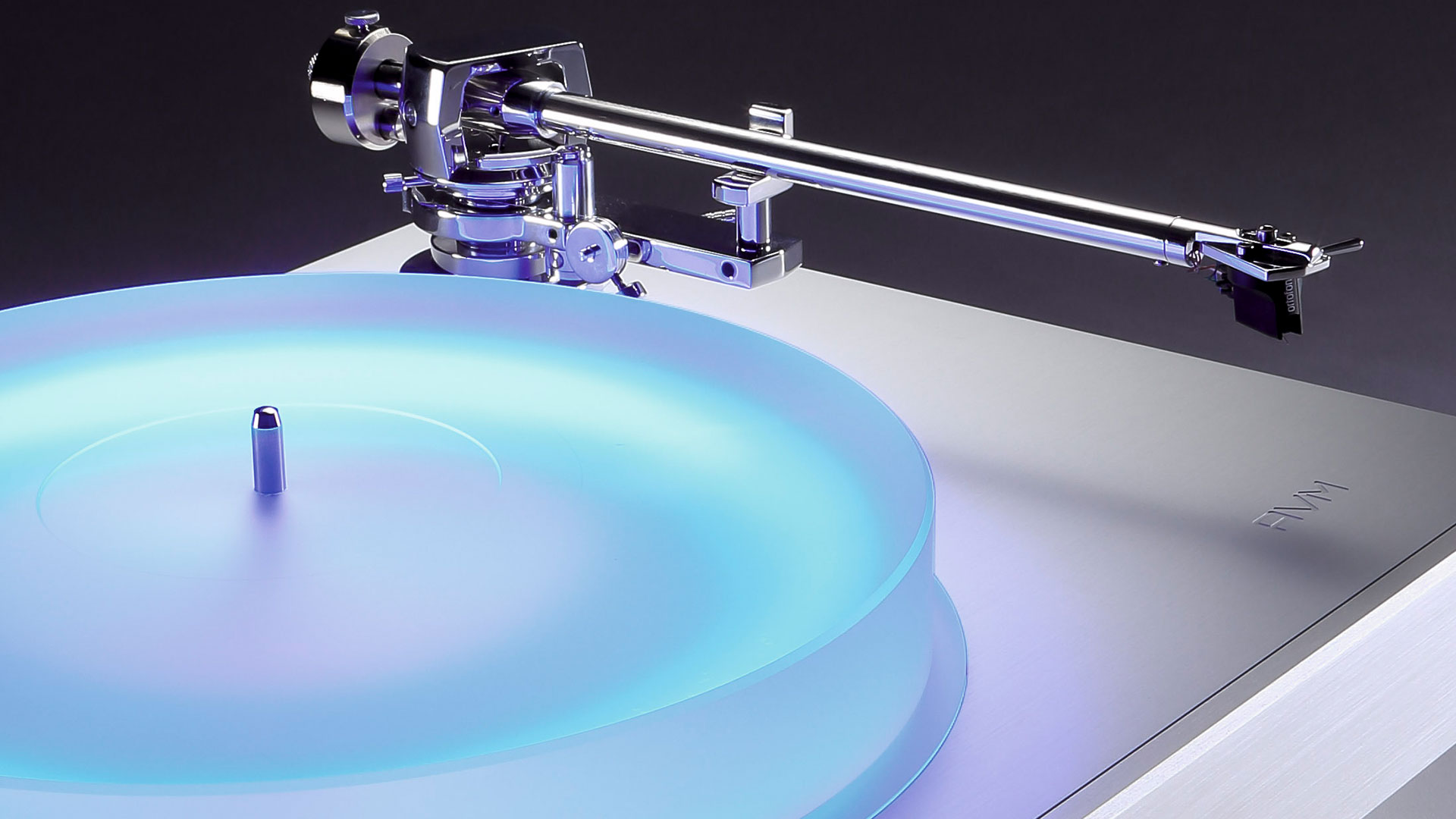 The German manufacturer AVM has now added two turntables to its product range. They have been developed entirely by AVM themselves. We are testing the larger R5.3, which is an enlightenment in every respect.

If you wanna be noticed, you gotta stand out! AVM from southern Germany has taken this simple insight very seriously for their two brand new and first ever turntables. With their acrylic plates shining in bright blue, they are not easily overlooked! Don‘t worry: if you prefer a more discreet design, the lights, which spread an almost magical aura around the turntable, can either be dimmed, or switched off entirely.

There are two models on offer: the R2.3 for around 3390 Euro without pickup and the here tested R5.3, which has a price of 5490 Euro without pickup. Both have been developed in-house, as it was out of the question for the manufacturer from Malsch to simply have models tailored into the existing equipment line by a supplier. The production itself, however, is carried out by the specialist EAT.

The immaculately crafted R5.3, weighing around 17 kilograms, presents itself in the cool, bright silver aluminum design typical for AVM. The sober, straightforward composite cabinet consists of 60 millimeter thick HDF covered with metal plates, with the properties of the materials supposedly perfectly complementing each other. On stimulation from the finger bone, the frame indeed proves to be acoustically largely „dead“.

Another special design feature is found in the drive. Instead of directly looping the drive belt around the metal disc that carries the five-kilo platter, a pulley opposite the motor picks up its pull, so that the sub-platter is driven evenly from two sides and without tilting moment on the steel axle, which in turn stands on an extremely low-friction Teflon mirror. This „Elipso Centric Belt Drive“ is designed to promote smooth running and rhythmic timing.

The gimbal-mounted ten-inch tonearm is adjustable in height and made of polished aluminum. Its counterweight is fixed with a knurled screw, so it can neither wiggle nor shift. With an effective mass of 15 grams it has an average weight, especially since the headshell, which would otherwise have to be added, is already included here, along with the sliding system mount. We received the R5.3 with pre-assembled Ortofon-MC Cadenza Black (around 2300 Euro), which we only had fond memories of since we tested it in 2010. It also fits perfectly in terms of price as well as quality.

For our listening test we switched off the beguiling light, to avoid being “lulled” into the charm of the „blue hour“. Mounted on four height-adjustable damper feet and supplied from an external plug-in power supply, the AVM then had to show what it was capable of – without any distractions. No Problem for the R5.3 as it follows the proven AVM ideals. Its performance was extremely precise, direct and clean. Even lowest frequencies were depicted as well-proportioned but yet sinewy and tight, whereby the Cadenza Black supported the rendition with its subtle way of exactly organizing all sound elements.

We were impressed about how lively and “pure” the turntable sounded. Even in the hustle and bustle of Diana Krall‘s rapid opener of the „Live in Paris“ album, its diction always had a delicate, superior note. The AVM unfolded the sound three-dimensionally and well structured – but without any “dissecting” attitude  – luxuriously in front of the listener; just like a wine connoisseur would serve a perfectly tempered and stored bottle: self-confidently, but without any arrogance. Well, what do you say now?

The R5.3 sounded sovereign, mature and, yes, extremely developed with every kind of music. It is astonishing that AVM, who – as electronics professionals – have of course also designed the elaborate „Look Forward“ motor control themselves, have managed this. However, it also took five years until the finished record player was ready. It is guaranteed to trigger an alarm in the high-end sector – even without the blue lights. ■

The R5.3 comes with a dust cover. It is not made of polystyrene, as is often the case, but of acrylic glass. Small metal pieces with rubber studs are screwed into its front support points. We haven‘t seen anything like this in a long time.

With its turntable debut AVM immediately sets a sign – and not only because of the blue plate lighting, which can be dimmed or switched off completely. The R 5.3, which was developed in-house and manufactured by the specialist EAT, is as elaborate as it is cleverly made and shines with smart in-detail solutions, including a belt drive with no one-sided pulling moment on the platter bearing. The frame is made of aluminium-clad HDF boards. The play-free running ten-inch tone arm is made of polished aluminum. The expenditure results in a decidedly developed, mature and in every respect high-end sound. 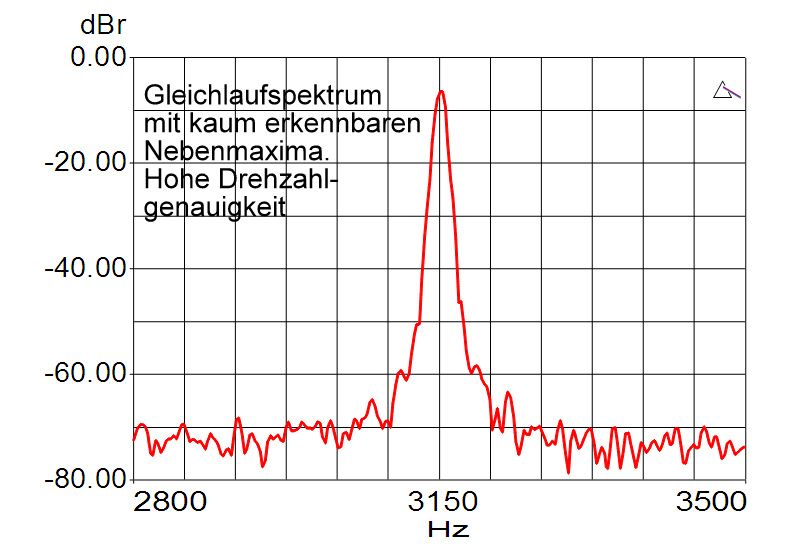 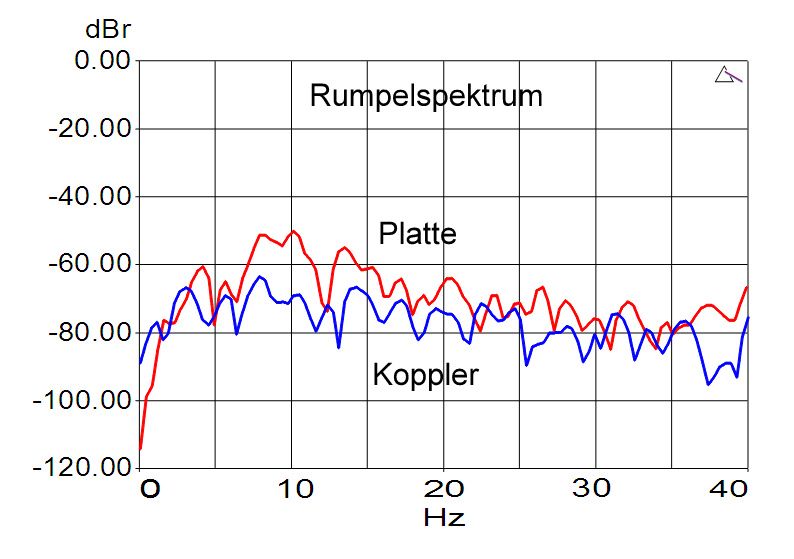 Although the R 5.3 does not have an option for fine tuning the speed, it maintained both speeds very precisely and showed only minimal fluctuations. The very low rumble, both with record and by measuring coupler, is also negligible and showcases the quality of the platter bearing.