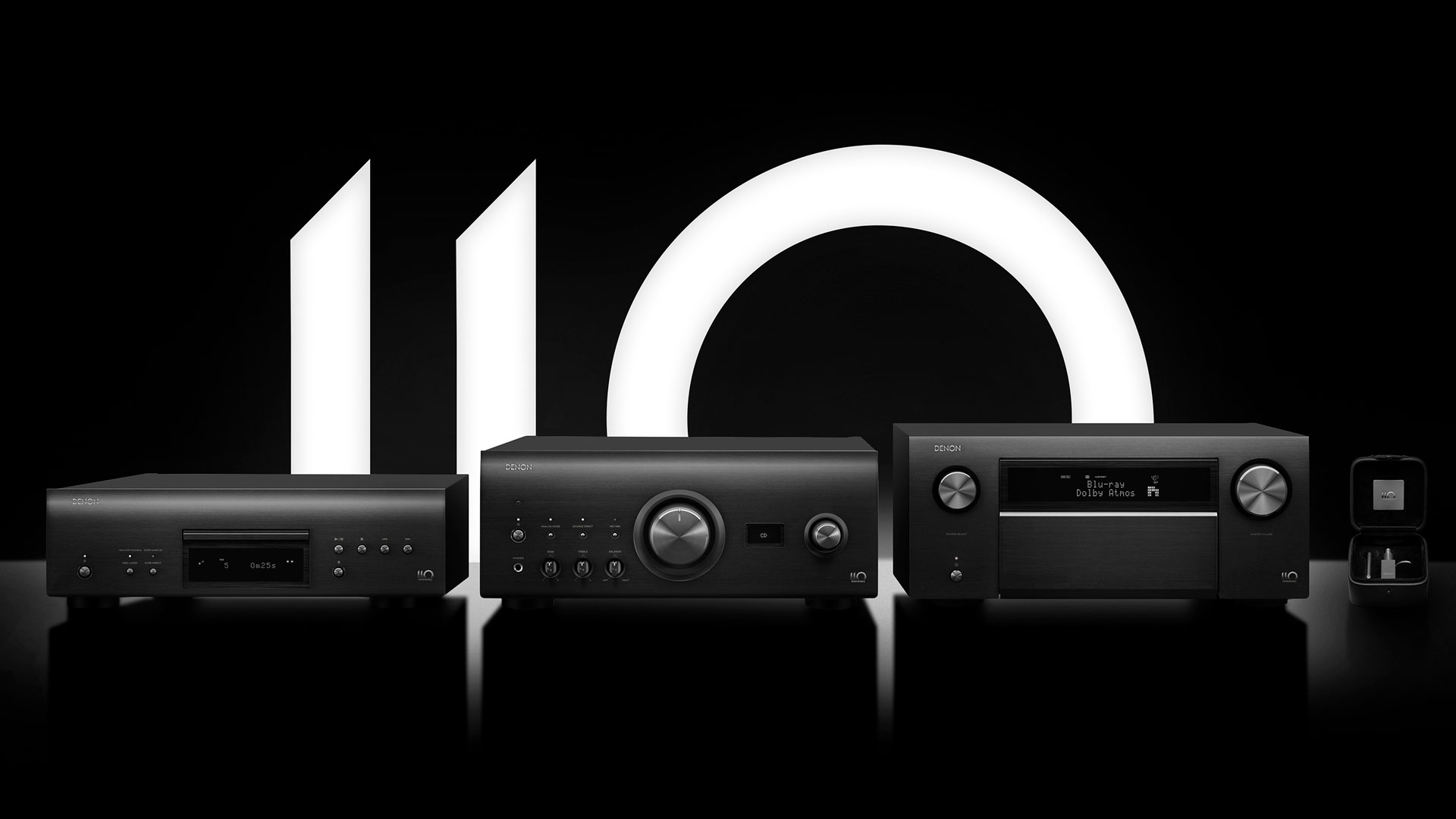 To Celebrate its 110th Anniversary

The "Denon Soundmasters" have re-tuned the new versions to set them apart from the standard products. Each device is delivered with a certificate of authenticity, hand-signed by Denon's chief engineer. In addition, a five-year warranty is provided for the products. The four anniversary products are manufactured exclusively at Denon's main factory in Shirakawa, Japan, and undergo a comprehensive quality inspection process before delivery.

Integrated amplifier PMA-A110 (around 3.500 Euro*)
The PMA-A110 integrated amplifier is based on Denon's patented seventh-generation UHC (Ultra High Current) topology and is designed to deliver a clean output of 80 watts per channel at 8 ohms (20 Hz - 20 kHz, distortion factor 0.07%) and 160 watts at 4 ohms. The amplifier circuitry is designed to provide a frequency response of up to 100 kHz. The completely newly developed electronic volume control counteracts noise and gear differences, which should have a positive effect on the sound quality.

The D/A converter tract has two PCM1795 chips per channel, which operate in differential mode to achieve the highest precision and the best possible signal-to-noise ratio. The PMA-A110 uses Ultra AL32 Processing, the latest version of Denon's technology that employs special algorithms to produce smooth waveforms that are as close as possible to the natural signal and supports high-resolution PCM input signals up to 384 kHz/24 bits.

With the built-in MM/MC phono preamplifier, turntables can be connected directly, while the coaxial, optical and USB-B inputs with jitter suppression allow the playback of high-resolution digital audio content.

The patented S.V.H. (Suppress-Vibration-Hybrid) mechanism, which is also used in other top-of-the-line players from Denon, ensures the shortest possible signal paths, which should prevent noise. The copper top plate improves stability, the disc drive is made of die-cast aluminum and two-millimeter-thick steel was used for the drive mechanism brackets. This solid construction, as well as the low center of gravity of the disc mechanism, should contribute to excellent vibration resistance.

The DCD-A110 also uses the quadruple D/A converter and the new Ultra AL32 processing. Instead of a simple analog filter circuit, the DCD-A110 features a fully discrete filter stage with parts carefully selected and tuned by the "Denon Soundmaster". Two integrated clock oscillators – one per sampling frequency (44.1 kHz and 48 kHz) – are intended to provide reliable jitter suppression and also serve as a reference for operating the quad DAC.

In addition, the DCD-A110 limited SACD player features separate power supplies for the digital and analog circuits to avoid interference and noise. The analog power supply circuit is characterized by a completely discrete design optimized for audio. The power supply of the DCD-A110 consists of specially manufactured parts, which have been developed in cooperation with selected manufacturers during numerous listening tests.

MC-cartridge system DL-A110 (around 600 Euro*)
The new DL-A110 moving coil pickup was handmade in the factory "Denon Audio Works" in Shirakawa, Japan – just like in the 1960s when its model, the DL-103, was launched. With a weight of only six grams, the exclusive headshell of the DL-A110 in silver-graphite ensures secure mounting and precise alignment of the cartridge. This is intended to produce a balanced, detailed sound signature with extended low-frequency performance. The DL-A110 has an SME bayonet connection.

AV amplifier AVC-A110 (around 5.500 Euro*)
With the AVC-A110, Denon presents its new, 8K-capable 13.2-channel AV amplifier flagship, which supports all common 3D formats such as Dolby Atmos®, DTS:X®, DTS:X® Pro, IMAX® Enhanced and Auro-3D®. Compared to the current flagship AVC-X8500H, a total of 285 electrical components and 153 mechanical parts have been modified.

With 8K/60Hz pass-through and upscaling, 4K/120Hz pass-through for games, and support for the latest HDMI specifications, the AV amplifier enables you to create premium 4K home theater systems with 8K compatibility that can easily adapt to future developments.

The monoblock amplifier design, with a massive 8.2 kg high-current transformer delivers 210 watts per channel into 6 ohms for the most realistic cinema experiences. For music, the integrated multi-room streaming technology HEOS® is used.

*Availability and Prices for Germany