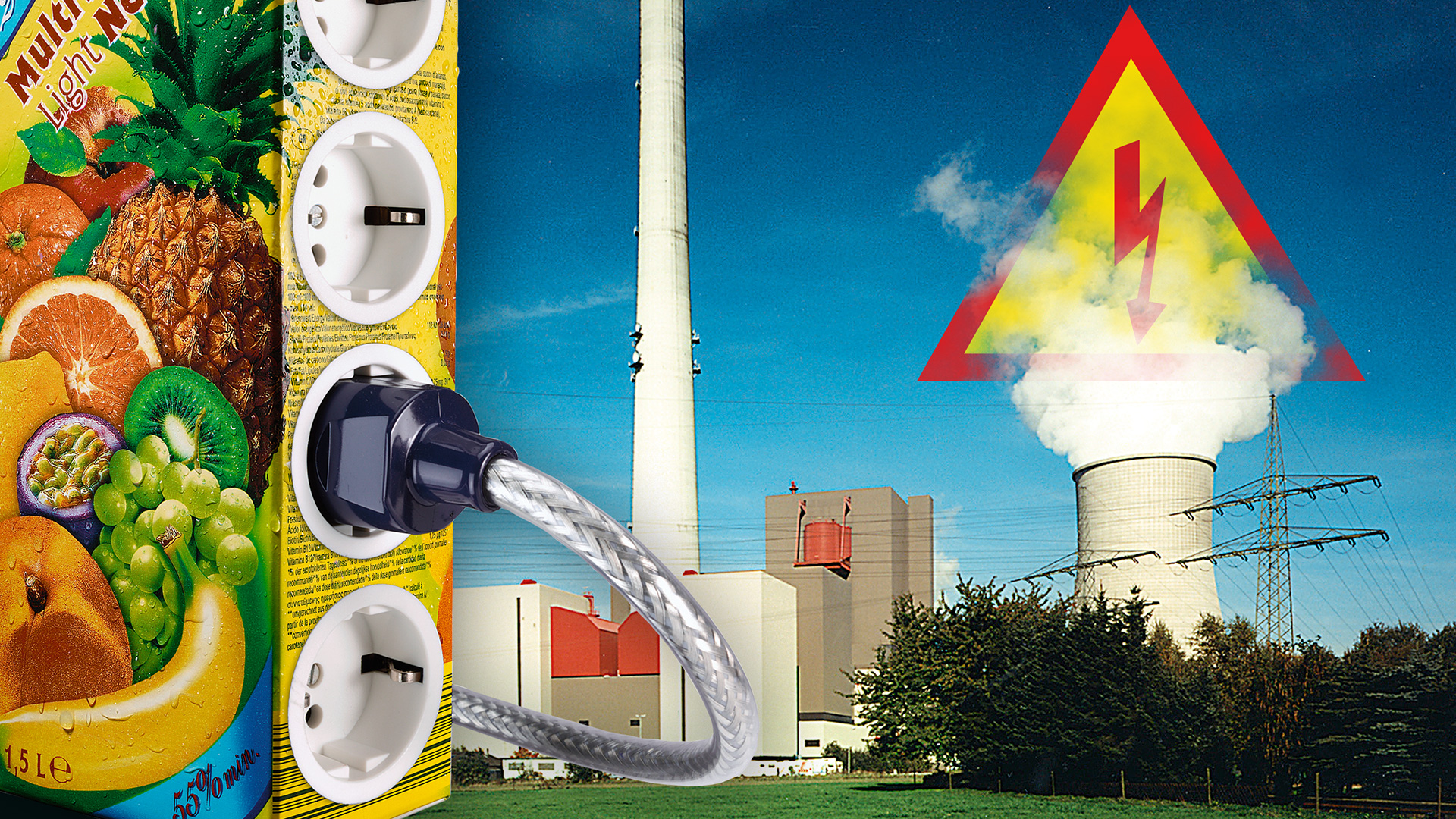 The alternating current for the purpose of supplying private housholds goes back to Nicola Tesla. George Westinghouse acquired the Tesla patents and managed to get the edge on his colleague Thomas Edison with his direct current model. Today AC is the standard.

By the time it arrives at the wall socket and can be conveniently „tapped“, it usually has already travelled several kilometres. The electricity that is converted in power plants from heat and movement, can only be transported over such long distances with reasonable amounts of losses in the form of high voltage. Only alternating currents – and this was the reason for Edison‘s defeat – can be transformed into high voltage. Closer to the consumer, it is gradually transformed down from up to 380,000 volts in the transmission lines until it reaches households with 230 volts (3 x phase-shifted by 120° to each other) or as three-phase current with 400 volts

Ah, the good old days! There was a time when the power grid was almost free of asymmetries (DC-offsets), negative phase effects and high frequency interferences/modulations. The usually ohmic loads – think of the good old light bulb – caused the currents on the outer conductors to more or less balance themselves, the neutral conductor was not unduly loaded, and there was hardly any high frequency.

The incoming 50 Hertz sine is – like an amplifier during clipping – flattened at the top and bottom, i.e. distorted, in the worst case deformed by phase effects and superimposed with other frequencies. This is measurable as a distortion factor, with higher effort also as a HF coating. Most devices, such as refrigerators or toasters, don‘t mind, at all. Even a notebook and also the stereo system will work as long as the voltage signal on the oscilloscope does not become tri- or rectangular.

However, these more delicate devices have a harder time dealing with excessively polluted currents. This is, by the way, also the reason why notebooks or TVs should not be operated with cheap inverters when camping (pay attention to the designation „real sine“ or „pure sine“).

There is, also, the interference potential of the HiFi system itself, the rectifiers, the pulsating charges of large capacitors (amplifiers), the switching power supplies and sampling rates of digital products. The basic problem is that, as mentioned above, any reproduced music is basically just a modulated current.

Unwanted external modulation can interfere with that. There can be consequential effects. If you, for example, have a powerful, broadband amplifier that captures a weak high frequency, which is then amplified together with the intended frequency, this can actually overdrive the amplifier if its own bandwidth is exceeded, thus leading to transient intermodulation distortion (TIM) or even to oscillation.

Conventionally designed power supplies provide little protection against the intrusion of high frequencies. Only very few transformers are capacitively shielded, protected with ferrites or, as with very few manufacturers, the devices are limited in their bandwidth, for example the preamplifier to 50 kilohertz and the output stage to 100 kilohertz.

Here, too, there are conflicting goals, because an enormous bandwidth is considered „fast“ and „open“ in terms of sound quality, while, further, digital high resolutions (HD audio) of 384 or 768 kilohertz also mean that signals up to half of these sampling frequencies are (or can be) generated on the analog side, according to Nyquist. This used to be called amplitude modulation (AM radio).

Thick neutral conductors and a separate protective conductor would be recommended as the basis for a particularly EMC-friendly power supply. After the war and to this day, energy suppliers have neglected to lay five-wired instead of four-wired cables as standard, also in order to save copper (or aluminum). They therefore only install three phases (outer conductors) and the neutral conductor in the houses. Until around the mid-1960s, it was even quite normal within houses to form a combined PEN conductor from the neutral and protective conductors.

Today, this can lead to inexplicable phenomena (monitor flicker) or even real problems, especially with networked devices – computers, telecommunications and radio devices, but ultimately also A/V and HiFi devices. There have, for example, been cases of overheating PEN conductors causing fires in electronics stores, as you can imagine especially, in large TV walls where dozens of devices are running in parallel.

Since HiFi systems are also increasingly developing into network-compatible multiroom and streaming systems across floors and more and more digital technology including high frequency, switching power supplies and Class D is being introduced, the problem is even increasing.

For modern buildings, new installations, revisions and retrofits, there are clear recommendations, if not regulations, to use a consistent TN-S network system („Separated“) instead of the TN-C („Combined“ PEN conductor) provided with existing protection, i.e. with external conductors and both neutral and (separate) low-impedance protective conductors, which has been proven to be significantly less susceptible to faults.

Such a system measurably increases the so-called „electromagnetic compatibility“ (EMC), the safety against interference and also the overvoltage/lightning protection. Homeowners should do their best to start here and treat themselves to the separate protective earth conductor (earth), the author has even had a supplementary pole-earthing set especially for the cellar. The keyword here is „equipotential bonding“. Talk about it with your electrician! Tenants will usually have to live with the standard they find, but can also help the power grid with partial TN-C-S retrofits and inductance-free fuses.

The power grid should in principle be as low inductance and low resistance as possible. Then both the susceptibility to interference and the losses are at their lowest, and the thrust is delivered as delay-free and unconstrained as possible.

The usual miniature circuit breakers in the fuse box have an – albeit low – inductance due to their magnetic switches. However, as anyone can imagine, even a large bicycle is slowed down by a small dynamo. So let‘s get it out! Instead, it is preferable to use large-calibre, corrosion-protected fuses as for example the specially developed AHP sound module, which is already available in its fourth generation and makes an audible difference.

The stage image becomes larger, the sound is energized and enriched with additional thrust. DIY store socket strips, clamp terminal connections and cheap wall sockets are the next bottlenecks with resistances that are often ten to 100 times too high, or at least much higher than necessary. We recommend to replace them with the complex contacts and screwable sockets from Furutech, Groneberg, HMS, Oyaide etc., as well as with audiophile socket strips from, for example, Audioplan, Goldkabel, HMS, MFE, Music Line, PS Audio, Silent Wire, Supra or Vibex, to name just a few.

Some HiFi enthusiasts have deliberately not used a residual current circuit breaker (FI or RCD) in the circuit of the system because they also fear losses here. Now, at least for me the potential loss of life weighs more heavily. A correctly designed FI switch ensures lightning-fast protection in case of device defects and, yes, it even prevents unintentional or intentional suicide in the bathtub. If there are children, pets or electronic tinkerers in the household, there is no way around the FI!

Inspired by audiophile employees the specialist Doepke developed in complex measuring and listening tests an FI switch that is optimized for audio purposes with the name Audio-FI (DFS 4 F Audio). It is supposed to get rid of the reservations against the „bottleneck“ FI for good, as it wants to combine protection and top sound with each other. STEREO has followed its development with great interest and benevolence and will report on it as soon as it becomes available.

People who endlessly argue that there are only dozens of meters of cheap 3 x to 5 x 1.5 mm2 copper wire in the walls in front of the system, and that the last meter of thick high quality cable wouldn‘t make a difference, has not thought it through to the end. In fact, of course, it is a good idea to lay a cable with a stronger cross-section, possibly even shielded, from the control box to the socket in the listening room, because it lowers the overall impedance.

This cable must be suitable for fixed installation and must therefore be NYM-compatible, i.e. consist of solid conductors. Our explicit recommendations are HiFi-Tuning Ultimate Solidcore (www.hifi-tuning.com) and Oyaide EE/F.S 2.0 (www.fisch-audiotechnik.de).

But the most important meter is, in fact, the one directly in front of the devices. This is due to the disturbances caused by compensating currents that flow between the devices on their ground connections and protective conductors. This is precisely why good materials, contacts and larger cross-sections are essential for accelerating equipotential bonding and why quality power cables make a difference.

Since everything is interrelated, not only should the current flow to the system and between the components be improved, but the potential of the cabinets and thus also the interference on the ground, which could impair the signal, should be minimized from the onset.

These potentials, which are nothing more than measurable voltages between device ground and earth, can simply be reduced by one-third just through turning the power plugs. And nevertheless there are still people who consider the well-known and easily measurable effect of polarity on HiFi devices to be inaudible „voodoo“ and therefore negligible.

Let me put it this way: it‘s not! On the contrary, you give away sound there, and if you don‘t hear the difference between different plug positions you may have the wrong hobby. Okay, sorry that‘s a bit too harsh. In fact, you actually can‘t always hear it and you can‘t even always measure it – for example with switching power supplies.

We recommend to have the electrician connect the electrical circuit of your system to a phase (outer conductor) with as little load as possible such as that of the bedrooms and not to one on which also the solar system or Powerline-adapter is attached.

In addition to checking the polarity, the equipotential bonding can be improved by an additional ground connection. Already as a teenager, the author has used grounded copper foil to underglue the rack bottoms for shielding purposes. It is also possible to ground the equipment directly. However, this applies with exceptions, because there are devices, in particular some amplifiers from GAS, SAE, SUMO, SST, but also Sansui and Yamaha, which have two „hot“ poles and no proper ground. They must NOT be earthed additionally!

You can simply attach a standard busbar to the rack or shelf and have the masses, such as the grounding of the rack, tuner and turntable, converge here in a star shape. If, while grounding a component, you suddenly notice an unwanted humming due to a ground loop, just undo it again. The aim is, after all, to reduce disturbance and not to increase it.