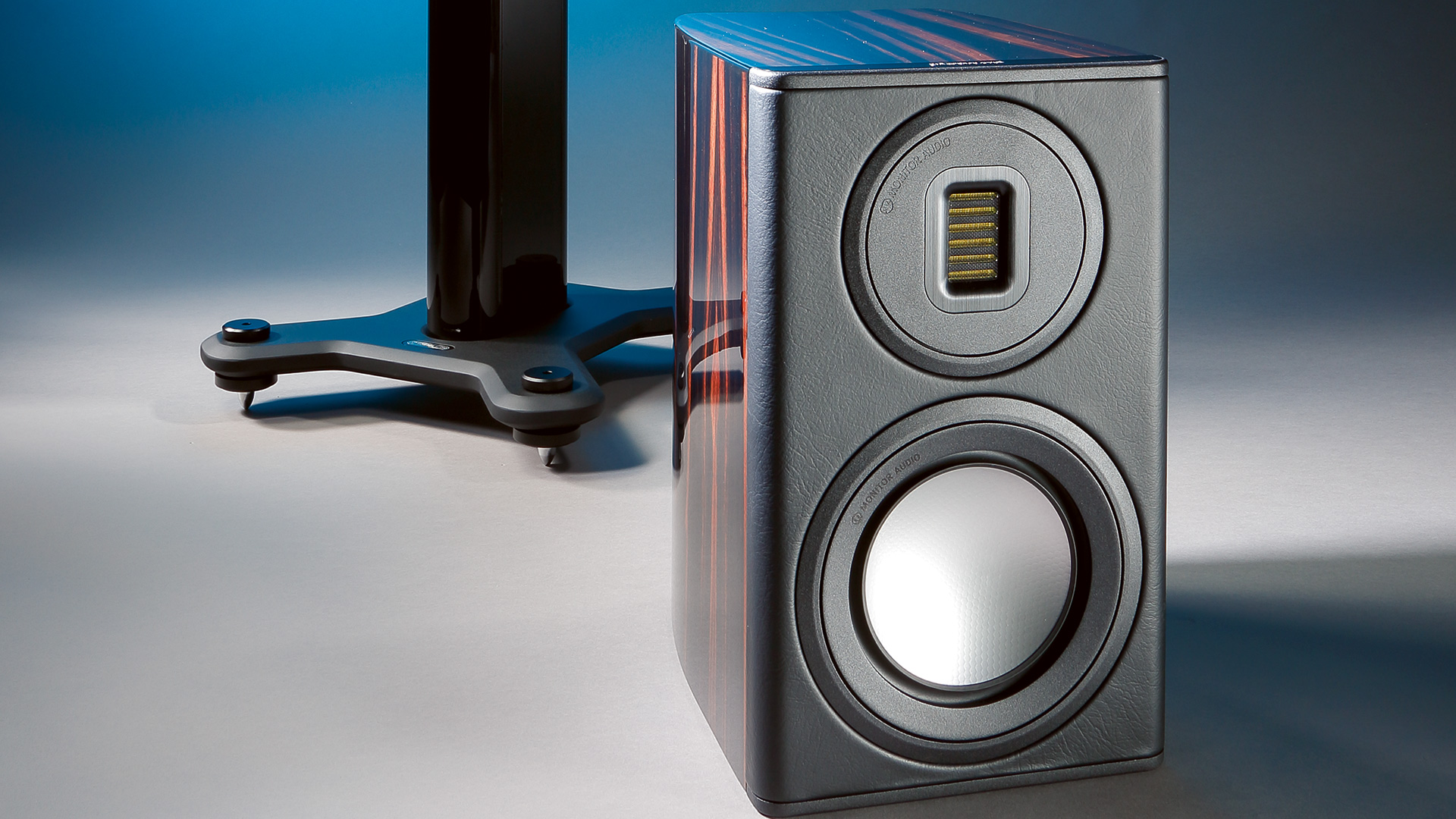 Heart of Platinum – Recently we tested the Gold 200 from Monitor Audio. But we wanted more than gold – and ordered the Platinum PL 100 II standmount speaker from the Brit‘s top series.

This compact two-way speaker from England deserves a price for its meticulous attention to detail that we haven‘t seen anything like in a long time. The Platinum 100 is manufactured neatly and lovingly right down to the last screw. Gap dimensions, which should even satisfy fans of made in Germany premium automobiles, a mirror-smooth polished cabinet surface on top of a noble real wood veneer, more than solid terminals, and nowhere a sign of cheap Phillips screws. The front is even entirely free of visible screws and covered with fine Scottish Ingleston leather.

This satisfying thoroughness – which certainly leaves its mark on the cost of production – is equally visible in the matching stands, which make their proud price of 750 Euros for the pair seem much more justified than is generally the case. After all they have a sheer mass of around 18 kilos, a very stable and at the same time multiple times decoupled base and a well-designed cable duct, so that the wires aren‘t just dangling around.

In addition to these exterior features, the 15 kilo two-way ported loudspeaker also has the technical necessities to ensure some sleepless nights for the competitors. So let‘s take a look at the ingredients that have been combined in England to make the Platinum: first there‘s the AMT tweeter, which, in this loudspeaker, plays so beautifully mild and rich in detail that you wouldn‘t recognize it for its design concept. The reasons for this include the acoustically open design of the drive at the front and rear, as well as the dimensions of the especially tightly folded foil, which have been optimized in the course of countless experiments.

This enables, first of all, a frequency response that is unusually smooth and extends downwards, while the powerful neodymium drive further achieves an efficiency of just below 95 dB. This allows the level to be adjusted to the midrange/bass driver, which is also built in-house, and to be reduced by several dB using resistors. This in turn reduces distortion and increases the dynamic range. Experiments were also carried out with the dispersion characteristics until an optimum compromise was found between still high efficiency and a dispersion and energy distribution suitable for living rooms. To prevent unwanted vibrations from irritating the tweeter during its work, it has been screwed to an internal rear panel with a fixed bolt – as can be seen on the sectional drawing.

Great effort was also invested in developing the woofer/midrange into a driver that is sought in vain elsewhere. The diaphragm is made of five (!) different materials: First and foremost there is the core of the chassis, which is made of a chemical material from duPont and is called Nomex. This material is lightweight, highly heat-resistant and can also be found in commercial aircraft as a lightweight structural material. The developers have then laid another layer of a mixture of aluminum and magnesium fused together to form ceramic on top of this. For additional stiffening with minimal weight gain, carbon was applied on the back.

Another well-known problem was also given increased attention: the voice coil‘s urge to move. It is primarily concerned with itself and ignores the state of the diaphragm it drives, i.e. it forces the chassis to make movements that inevitably cause distortion. In order to prevent this, the British now use a mechanical filter that allows the driver complete freedom of movement up to a given frequency, but also acts like a damping spring and strictly prevents movements beyond this cut-off frequency.

In order to keep the temperature balance of the hard working voice coil in check, this mechanical filter has all around been equipped with ventilation slots. The result of these efforts, as promised in England, is fewer overlaps in the frequency response of the two drivers, which should lead to cleaner reproduction. By the way, this driver is also firmly screwed to the internal rear panel with a bolt-like screw.

Reflex ports are all the same? Not quite. Monitor Audio‘s crew came up with a "high-speed" solution that lets the airflow out to the rear much faster than usual. In order for this to happen in silence, the reflex tube has been provided with many small grooves and a felt damping ring on the last centimetres. With all these measures, a further advantage was gained: the crossover, docked directly behind the terminal, manages with only a few high-quality components and thus never gets under suspicion of reducing efficiency or dynamics.

Listening to a loudspeaker in your private living room is still something different than making a judgement in the STEREO listening room under familiar comparison conditions. Although the sound impression tended to be similar there, the Monitor Audio was able to show differences between the connected players and amplifiers to a greater extent than previously experienced. Although its high-frequency range is always soft and unobtrusive, it is absolutely capable of detecting even the finest details and highlighting differences.

For example, the Platinum plays on an Audionet SAM without complaints and more than satisfying, but we only exhausted its full potential from Zappa and Steven Wilson live to Springsteen‘s "Western Stars" when we plugged in our "little" Gryphon‘s Diablo. Dynamics and different recording locations were then served to us on a silver plate. You can hear that the past 35 years as a vocal- and live artist have not passed the "Boss" without leaving any trace, though he is still in shape for his almost 70 years of age.

The lightness, unobtrusiveness and precision of the Platinum when releasing these details, together with the always present, powerful bass, made even long listening sessions an unspectacular pleasure and the speaker more than just another member of the club of the best. Rather it is a huge recommendation.

A standmount loudspeaker of the highest quality, which is visually as well as sonically captivating and sounds as suitable for long-term use as only few others. Fine resolution while yet sounding "round" and smooth. Powerful bass, yet relatively uncritical in terms of positioning.