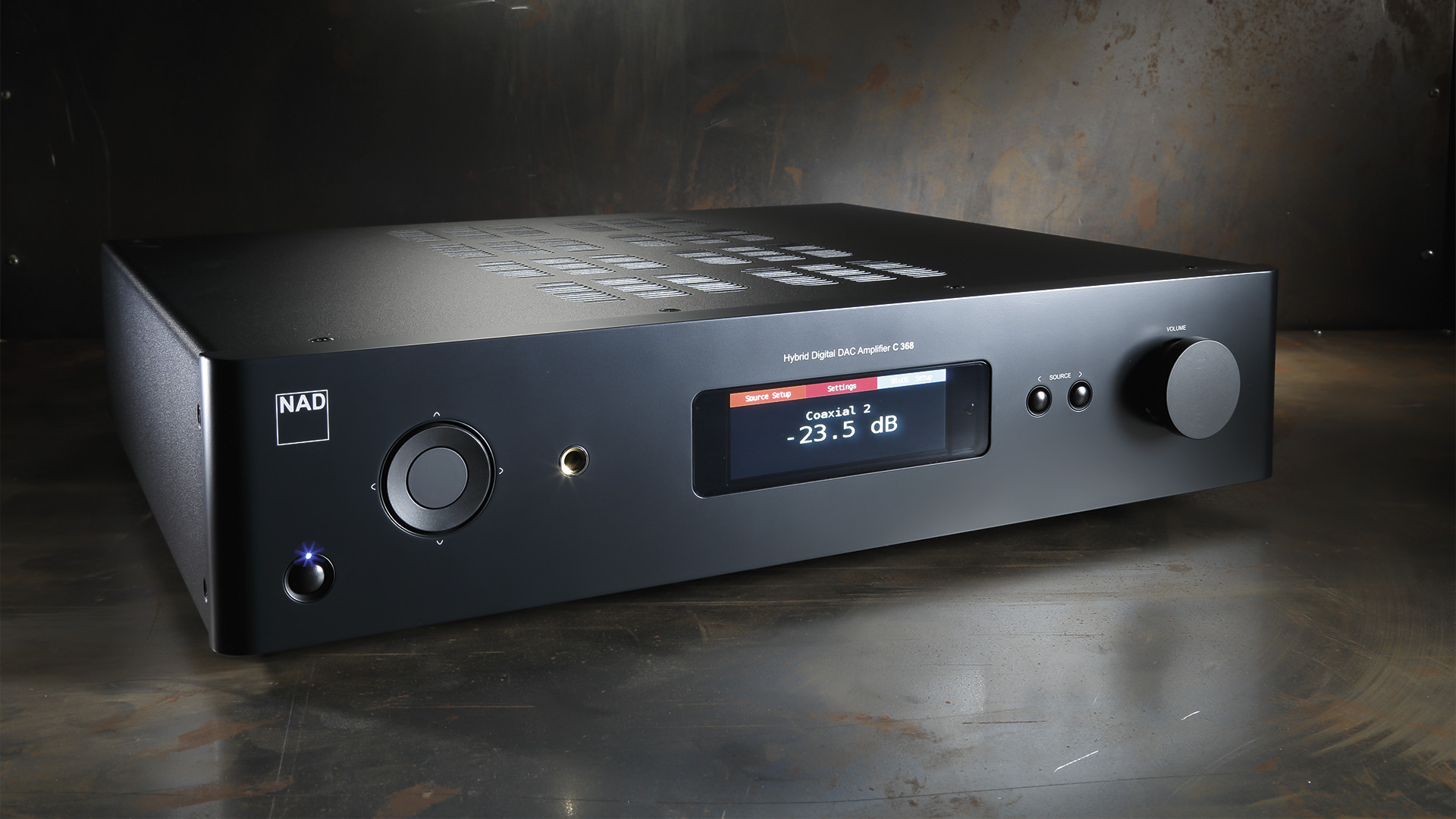 At 1000 Euros, NAD‘s new C368 is the middle of a modern amplifier trio that combines the best of analog and digital amp technology.

For decades, NAD has been a pillar, even a bastion for the small amplifiers, especially on this side of the 1000 Euro line, and they continuosly demonstrated what was possible in terms of sound at this price point. The legendary 3020, for example, already showed decades ago to even sometimes much heavier and bigger Japanese or American rivals, how it's done.

Short signal paths, no unnecessary ballast, load independence and above all a dynamic liveliness were always the fingerprints of the Canadians. A small C316 BEE or C326 BEE was very hard to surpass in this moderate price range, which rarely ever happened – very rarely, to be exact. Also the bigger brothers were always superbe, above average sounding amplifiers. So here NAD has an enormous reputation to defend.

When Class D came up as a sensible, energy-efficient technology – one that could not be ignored in light of the climate discussion – it was NAD who quickly adapted it and quite brilliantly solved the initially often critiziced problem of Class D amplifiers responding to different nominal loads with a variable high-frequency response. While quite a few other manufacturers were willing to compromise and tune their devices to medium nominal impedances of six ohms in order to deliver acceptable results at four and eight ohms, NAD found a better way.

Their amplifiers recognized the impedance of the connected loudspeaker, included it in the feedback loop and thus ensured the linearity of the system. Not only that, but NAD even managed to convert the signal processing with the rapidly growing digital sources into a direct path ("DirectDigital"). For me personally, the corresponding M2 from the Masters series was the first Class D/PWM amplifier that I could really take seriously as a "sound fetishist".

NAD expanded this and also experimented with other shapes, including vertical ones, and thus appealed to new customers, such as for example design freaks or PC gamers. The "Modular Design Construction" was first developed in the AV-sector due to its need for constant adaptation, which kept the amplifiers up to date via exchangeable MDC plug-in modules. The C390 DD broke down the M2 concept into the more affordable range of the Classic series, now it is available in the second generation. Nevertheless, the traditionally analog Classic series was retained and such a device was offered in every "affordable" class. Until now.

The "Classic" series has now been equipped with a hybrid technology base ("HybridDigital") that combines proven and innovative approaches in a congenial and modern way. Around the year 2000, Björn Erik Edvardsen (BEE) discovered Hypex's UcD technology and refined it, combining an optimized analog switching amplifier with high phase fidelity and adding a 20 dB feedback loop to obtain a high-current amp with excellent sound characteristics independent of the load.

With the C368 we now have the medium of three amps of the brand new Classic generation in front of us. With a standard phono input, but also digital connection options that an integrated amplifier can hardly do without today, it appeals to the typical NAD clientele. They naturally want a practical AND good-sounding amp and peace of mind for the upcoming years. The motorization is perfect for most applications and users with 2 x about 80 Watt sinusoidal power.

It also bridges the gap to modernity with its modular expandability. Optional expansions are possible in form of HDMI or BluOS streaming module. We consider the latter to be the most interesting and ordered it together with our test device.

The amplifier's base price of around 1000 euros is thus increased by almost 500 euros. However, the buyer also gets a full-fledged streamer with access to the usual music providers such as Spotify, Deezer, Tidal and last but not least Qobuz.

The app/user-interface BluOS, which is known from Bluesound devices or e.g. also NAD's M10 has already attracted our attention several times and left an extremely positive impression – it's no different here. The handling is intuitive, very simple and exemplary stable. After briefly setting up the streaming module on the amplifier, you select the streaming portal on the network like any other source, and then it's most convenient to use a tablet. If all apps were like this, music streaming would be even more widespread in Germany.

With the C368 you unquestionably get exactly what you'd expect from an NAD: excellent sound at its price point – but there's even more. The modular concept, for example, ensures future viability with its expansion slots. The BluOS streaming module is by no means an accessory that appears optional or seems somehow "forced". From our perspective it makes this amplifier complete and – yes, in a complementary way – perfect.

My colleague Julian Kienzle and I have operated the NAD both with external sources and in a network and combined it with various loudspeakers from the small DALI Oberon to the top speaker TAD E1TX. We've even used it to determine delicate sound differences such as a comparison of Chromecast internally vs. externally together with the Technics SL-G700. This integrated amplifier provides vivid and agile sound together with superb resolution, pressure, dynamics as well as temperament and it is altogether just great fun. This is an amp one really should have heard! Moreover, it will be difficult to find a nearly as potent streamer for the 500 Euro surcharge of the BluOS plug-in. Maybe this is the future of hi-fi. An accomplished, recommendable and great product in every respect!

Powerful, well-equipped 1000-Euro-Amp with analog-digital hybrid technology, which can be upgraded modularly in a future-proof way and sounds very good. We've tested it with the sensational, very easy to use BluOS streaming module, which costs only 500 Euro extra. A great recommendation!