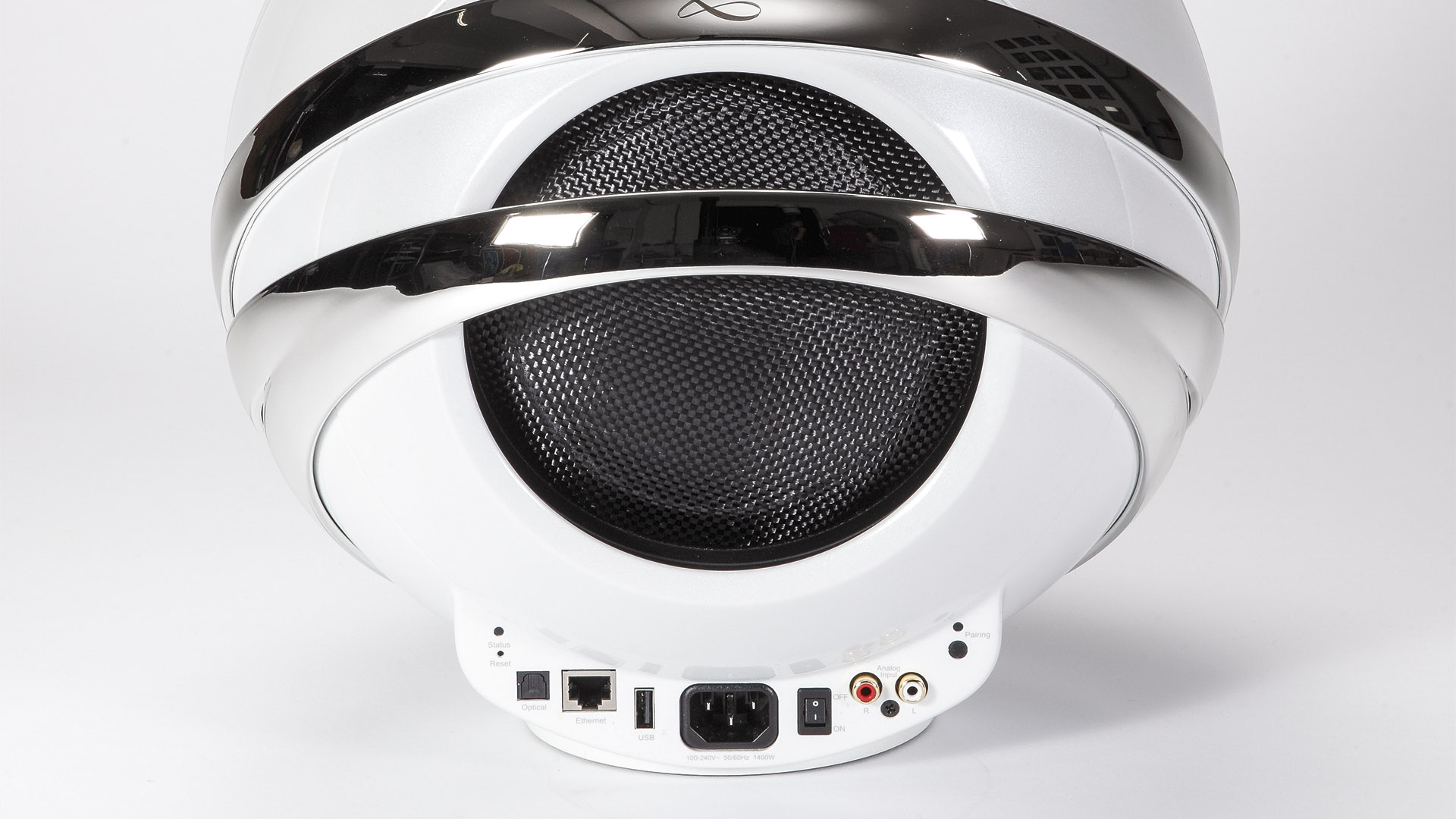 With the active streaming speaker Pearl, the French loudspeaker specialists from Cabasse once again go their own way.

Unbelievable. That was my first thought after hearing the "Pearl" from Cabasse for the first time at the ATR booth of this year's High End show in Munich. Everyone was searching for the subwoofer that apparently supported the presentation. In vain, because there wasn't one. Hardly bigger than a basketball mounted on a three-legged steel stand, of course either in black or white with aluminum brackets, the Pearls from Northern France did not only attract attention. Also they built an enormous stage with overwhelming depth staggering and underlined the effortlessly detailed as well as dynamic performance with a bass as low as it is otherwise just known from speakers the size of a vending machine. What?

Yes, the Pearl reaches into the lowest-frequency-range  of ten Hertz with only a very small drop in amplitude. This is ensured by ingenious DSP technology, an extremely rigid special cabinet and, last but not least, an amplifier block that provides the bass with one kilowatt and the mid-high speaker with 300 watts each.

Sinusoidal, mind you. For impulses, the 1600 can also become 3200 watts of thrust. That reads wonderfully, but one must actually have experienced it. This ball makes the foundation walls tremble when needed.

How do you do that? Well, Cabasse has been using the spherical shape for decades, even if there are similar shapes on the market today. Remember the top models Atlantis, L'Océan and La Sphère, but also the Baltic series.

This form, which despite the successful, conventionally constructed Cabasse loudspeakers followed as a drastically uncompromising further development, is ideal in terms of stability as well as dispersion characteristics, since there are no diffractions or unwanted reflections.

With congenial teamwork this spherical shape is traditionally combined with a real coaxial driver in Plouzané near Brest in Brittany, France. This is a feature that no competitor has, and Cabasse also does not give it away.

In order to withstand the extreme pressure conditions inside the cabinet, a special material was needed. According to Cabasse, fibreglass alone would soon break. This is why, in addition to carbon-fibre, a mutiple centimeter thick layer of resin – a composite material made of synthetic resins and other materials such as wood flour – is used, which together have the required material properties of high strength at a certain degree of elasticity.

The 25 cm bass driver with up to three centimetres of excursion and phase opposition drive is located in the rear of the cabinet. A new type of bending wave transducer, concentric around the tweeter, is used in the front, which can only be inspected when the magnetic grid with the company sign is removed.

Internally, a 32-bit converter with 768 kilohertz takes care of the digitally fed signals, so there is no compromise here either. Another advantage of the Cabasse Pearl that should not be underestimated is, of course, that it represents a complete system due to its streaming capabilities.

You don't need a hub; every device connected to a Pearl, such as a CD player or USB stick, is available as a source for up to eight Pearls, which can be networked and distributed throughout the house. The Cabasse "Stream Control" app ensures a pleasantly uncomplicated setup and assignment as well as configuration of groups.

Each Pearl can be acoustically calibrated at its desired position and additionally adjusted according to individual preferences.

Four times stereo is possible as well as multiroom with single Pearls each. Also a mix is possible because each Pearl is configurable individually. LAN, WLAN, Bluetooth, Alexa or Google (Chromecast), DLNA access to NAS storage in the home network – literally anything is possible.

Of course also Qobuz, Spotify, Tidal, Deezer, Napster and Internet Radio (V Tuner) are included. It is worth noting, however, that stereo operation requires a stable and permanent Internet connection, as the Pearl constantly checks the configuration for changes.

That's not a snag, because you won't notice it in your home LAN/WLAN environment, of course. Mono operation, on the other hand, is also possible completely offline.

Only Surround does not work – up to now. This would presumably require a hub, but is not planned conceptually. Pearl is therefore not really a loudspeaker, but a complete music system. For me it is even a multifunctional, sensual masterpiece.

If Cabasse were to ask me what I would do differently, I might, after a while of reflection, come across matt anodised aluminum temples, which would perhaps look even nobler for European taste. However that is rather a triviality, because the product is virtually perfect – aesthetic, functional as well as audiophile.

In fact, the new Cabasse Pearl sounds incredibly good, more vivid and sometimes more confident than some physically larger competitors. Forget the not audiophile, market-leading multiroomers, whose names we don't want to mention here. They have long since been left behind and now belong to the entirely different world of gimmicks.

The Cabasse is by no means only priced in a higher league of compact – possibly even all – "smart" active speakers. Their reproduction is incredibly captivating, they are very musical, precise and spatial. They literally won't let you go.

For me, this also includes an outstanding midrange and voice reproduction. Whether Katja Maria Werker, Cara Dillon or male parts like Rod Stewart or Pavarotti: just great!

The concept works. It is functionally harmonious, very easy to use and extremely versatile, and in no way compromised in terms of sound.

And, quite honestly, yes, the "I want this"-parameter is extremely high for the 18 (!) kilogram balls from France, the well-known WAF (Women Acceptance Factor) of course also.

In winter there will be a smaller model called "Pearl Mini" with a 17 cm bass driver and another stand developed by Cabasse, which will be available as an alternative to the Solid Steel tripod. So it will be interesting to see what other innovations from the neighbouring country will bring us.

But don't wait for it. Life is short, and these Pearls enchant thoroughly. Our word on it.

Sound as well as optics are stunning and it is versatile enough for just about every purpose. The black or white Pearl is more than a design object and more than an active speaker: it is a streaming and multi-room capable complete system with high-end sound quality. Uncompromising and beautiful.

The amplitude frequency response is balanced except for a bass emphasis and reaches extremely low. The 150/160 Hertz drop that can be measured at one meter microphone distance is due to the crossover frequency. It is almost inaudible at the usual listening distance. The extremely low distortion Cabasse with 1600 Watt output power is good for very high peak levels. The bass can be lowered by measuring it in the corner and then operating it further away from the wall.