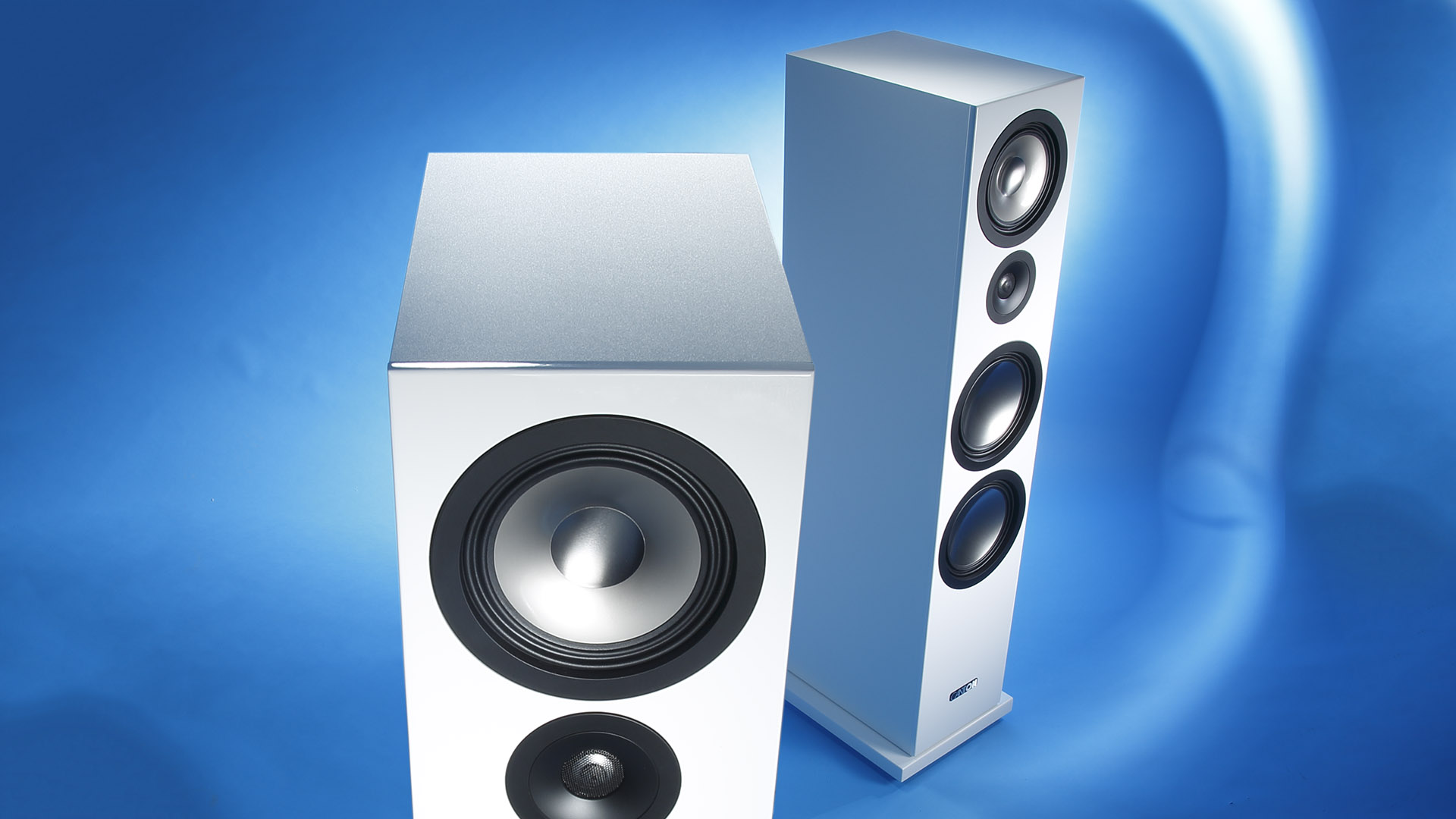 The same DNA – The sound quality delivered by speakers that cost less than 2000 Euros per pair is becoming more and more impressive. A convincing example of this is the floorstander Canton Chrono 90 DC, which wants to impress customers with top technology at a competitive price.

Indeed, if a virtually unlimited amount of resources is available for the development of a flagship loudspeaker, a lot of clever minds are bursting with ideas to get as close as possible to their sound ideal.

How does it look though, in comparison, when the task is to create a really good loudspeaker that sounds mature without putting an excessive strain on the budget of you and your family?

Together with his team, Frank Göbl, head of development at Canton, was confronted with precisely this honorable and demanding task when it came to developing a new Chrono series.

Of course, cutting back on aspects that have previously been identified as optimal is not easy for any developer. Still, economizing is what was to be done – while following a very particular idea: the sonic losses should be as unnoticeable as possible in normal everyday use.

When you see how much effort some manufacturers put into removing any possible inherent issues from the cabinets of their loudspeakers and then look at their price tags, you might get an idea of where adjustments for cost reduction are most likely to be found. In fact, a lot of money can be saved in the housing of drivers and crossover. Instead of striving for a theoretical ideal, you could approach the matter with a certain pragmatism. In doing so, you would then come to the conclusion that using a solution just below the optimum might be an equally viable option.

That is exactly what was done in the Chrono series. Instead of real wood veneer or elaborate high-gloss finishes, the housing is covered in a fairly thick foil with a high black level. The cabinet is also somewhat thinner than that of the more expensive Canton models, but it still cannot be considered as cheap or bad. Thanks to cleverly used stiffeners, we are presented with a fairly unyielding and stable home for the drivers, which can stand up to the forces they generate. The shape of the enclosure also has an impact on the price. The more original and unusual it is, the more work a carpenter or the machines he operates will have to do. The working hours of both the craftsperson as well as the machine would be expensive. Thus, it was only natural that the Germans should adopt a strategy that has also been used successfully elsewhere: folding cabinets that can be produced quickly and with a consistently high quality.

However, they did not want to do without some other ingredients: The drivers are already known from the Vento series and have a good reputation. The crossover is also impressive, containing high-quality components, mostly "Made in Germany".

The so-called "Double Cone Membranes" of the midrange driver and the two woofers are made of an aluminum-titanium mixture. The dome tweeter has a diameter of 25 millimeters and consists of an aluminum/manganese mixture.

Another interesting detail, as a side note: Canton does not use a ferrofluid cooling system for the tweeters, which is found often in other speakers. The entire construction of the tweeter and its coordination with the crossover, as well as the implied small horn attachment, ensure that all the desired properties are achieved. These would be: high power handling, uniform radiation behavior of all drivers to each other and a good group delay.

To achieve this, Göbl and his team had to come up with quite a few ideas for the crossover. After all – in addition to the properties described above – the goal was more than ambitious, despite the price range. The speakers are supposed to be capable of high levels of sound pressure, even in the bass range, while having good efficiency, low distortion and a balanced frequency response.

To achieve all these aims, both electrical and mechanical parameters had to be taken into account when computing the filter design, for example. Of course, the proven "DC" technology was also used by Canton for the Chrono 90. No, it does not stand for "direct current" here as you might think, but for "displacement control"; this filters out the frequency range below the fundamental frequency of the bass drivers. The result: a powerful and low-distortion bass reproduction and high power handling.

Then let‘s get over to testing the extent to which theory and practical use differ or resemble each other here. The Hessian speakers were given a nice spot in our STEREO listening room, where they received their signals from devices that have seen and mastered many tests. We started with Stevie Wonder‘s classic "Isn‘t She Lovely" from the legendary album "Songs In The Key Of Life", interpreted by Livingston Taylor. The Chrono 90 DC took on the task with great enthusiasm, sounding airy, light and relaxed. Taylor‘s voice was displayed voluminously and sonorously, the guitar was precisely focused, and the strumming was reproduced well. The sound image seemed powerful without being unduly thickened, and even the „dangerous“ sounds of the flute were played pleasant and without sharpness.

Modern pop music was also a part of the examination: Lana del Ray‘s latest opus "Dark But Just A Game", which has a powerful deep bass. The Canton speakers did not turn this into a mild breeze, but pushed the energy cleanly and with power into the room, laking any audible distortions. All that without neglecting the characteristic voice of the singer, here sounding almost fragile.

Next up: A trip towards the realms of jazz and classical music, which are always included for the complete and fair assessment of a product. The demands these musical styles pose are significantly different from those of pop and rock music. Things like alienation, electronic distortions and trickery on the mixing console are the exception rather than the rule there.
Tasked with Glenn Gould and his version of the Goldberg Variations, the Chrono played at the forefront of its price range. Still, it lacked the final bit of detail, openness and physicality.

Despite that, it should be clearly stated that the Chrono did its job very well. Even at a lowered volume, coherences became clear, whereby, again, the speakers did not deliver the very last touch in terms of impulsivity and precision – as some more expensive top speakers would do.

Toto‘s hit "Africa" came along with a bass that was pushing mightily, while being rich and juicy, and conveying an immensely high amount of fun. And that even despite the fact that the upper bass range was a bit too pronounced and drew the attention a bit more than was needed as well as with slightly blurred contours.

Nevertheless: a detailed, very homogeneous sound, which is not always to be heard, even in higher price ranges – and which has nothing to do with the once popular, then frowned upon "Taunussound", as the typical Canton style was called at times.

One of the highest saints of the audiophile community was of course also to be heard: Melody Gardot, who has made some truly remarkable records. On "Moon River" – as sorry as I am to have to say it, dear audiophiles – she is clearly only the second winner, pitted against Marilyn Monroe. The latter gives the song a much more convincing, intense, soulful and passionate performance, albeit with poorer recording quality.

After a few more detours into a wide variety of genres, we finally landed on one specific album. In there, the two arts – interpretation and recording quality – were on equal levels and completely enthralled us in both respects: Larry Coryell and Philip Catherine, recorded live at the Berliner Philharmonie, prove on this record that they can not only make the audience jump from their seats and incite storms of enthusiasm as outstanding solo guitarists, but also as a team.

If you listen to "Manha de Carnaval" or "Jemin-Eye‘n", these true experts delight with virtuosity and the feeling that they pass the ball to each other precisely at the right time. In its best moments, the concert – captured with quite a lot of reverberation and a rather round sound image –, is reminiscent of the legendary "Friday Night In San Francisco" album. During the applause, however, it becomes clear that the sound could still be a bit better than the Canton Chrono 90 DC is able to reproduce.

In any case, the speakers from the small town of Weilrod near Frankfurt represent a very exciting and extremely fairly priced offer that deserves to be the subject of an intense listening test at your trusted dealer.

Floorstanding speaker that performs very universal and powerful. It delivers its qualitites even at a low volume and in smaller rooms. Economizing happened on the exterior, the technology is largely taken over from the more expensive Vento series. 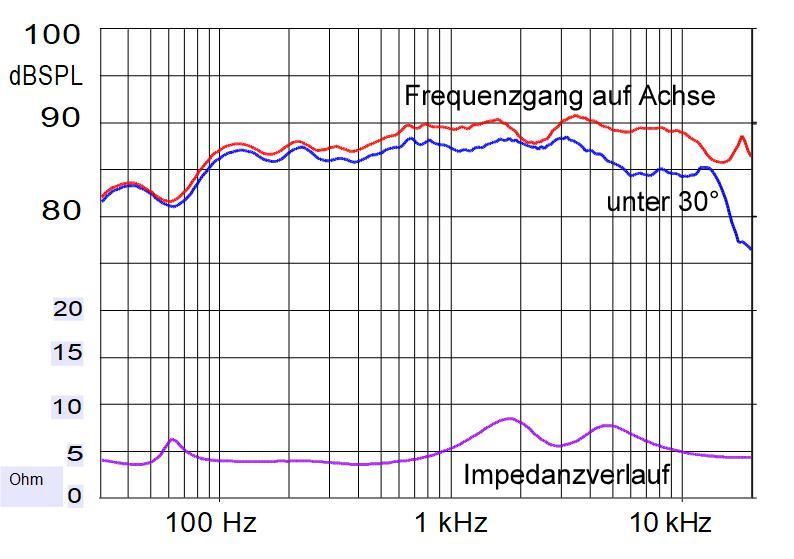 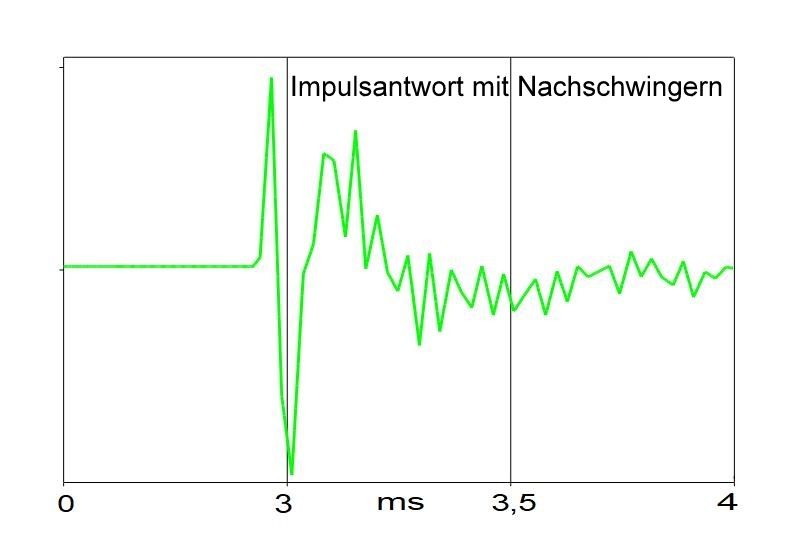 Once again, the American singer proves that she is much more than a pop starlet. The clean production is convincing on top of that! 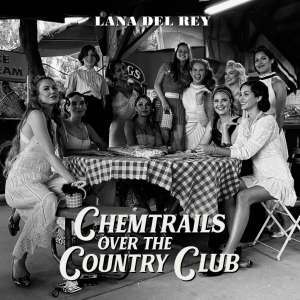 The time required for the signal to travel from the connection terminal to the moment of emittance at a defined distance for every frequency.