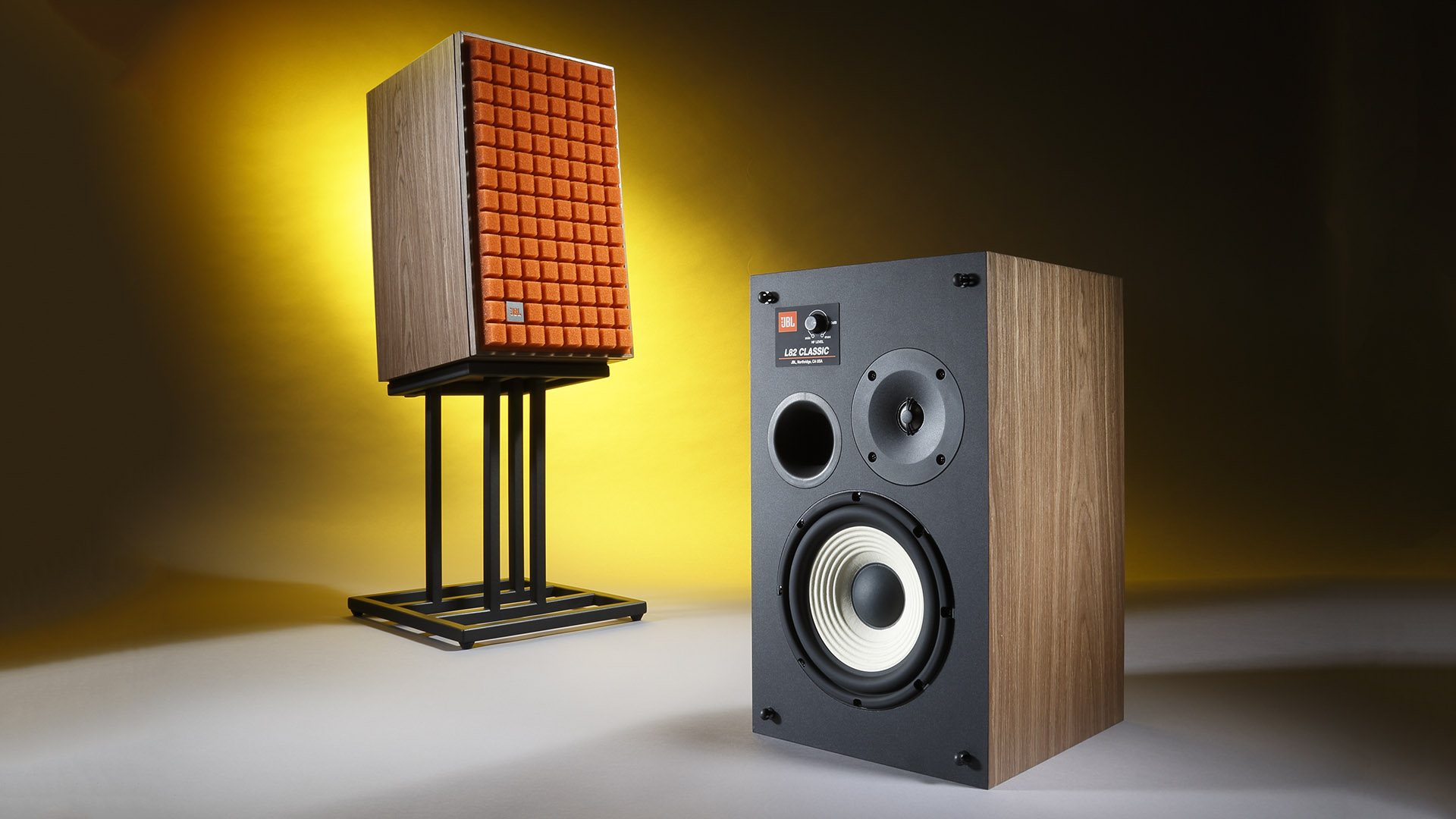 The American Fighter — JBL already displayed convincing qualities with the L100 Classic. Now, they send out the smaller sibling L82 to try and captivate listeners. STEREO wanted to know wether scaling down the dimensions has a decisive influence on the fun the speakers might provide.

Although the L82 comes closer to what might be called a "compact speaker" than the L100 (which we reviewed here), the smaller retro JBL with its almost 13 kilograms still might be considered one of the biggest small loudspeakers. The manufacturer JBL, rich with tradition, will not break its own record of units sold with a device that has a pair price higher than 2000 Euros anyway. This position is undoubtedly held by the actually compact JBL Control One in its various versions, which you can find literally everywhere. That feat is probably not expected of the new model though, as the L82 Classic is of a completely different caliber, even when only looking at its visuals and haptics.

It has the same aim as the larger model: speaking more to the lover, even the connoisseur, of music as well as perhaps the musician who also likes to deal professionally with products coming from the brand James B. Lansing.

Of course, the membrane of the powerful and sizable 20cm woofer is traditionally made of coated cellulose, also known as cardboard. That's a good thing actually, because JBL doesn't seem to do something wrong in going with this, neither in the sector of home hi-fi nor that of PA. This L82 is indeed dry, contoured and rich in the low frequencies, whereby the size is positively noticeable in that range. The front-facing bass reflex port rounds out the foundation a little bit, compared perhaps to the PA colleagues. It also domesticates this speaker, however, to a still manageable and presentable format for the ambience of a home. The arrangement also simplifies the placement in your home; it would be different with a rear facing port, which can quickly pose difficulties, for example when trying to place it in a shelf.

In any case, the JBL L82 is an eye-catcher, it is a loudspeaker and is allowed to/should still look like one – unlike some things that nowadays rather resemble oversized matchsticks or candleholders and sometimes sound fittingly thin. It doesn't have a touch of "yesterday" because of that, however. Of course, this compact version doesn't dominate the room the way the L100 does.

The engineers left the high-frequency department to a proven 25cm titanium dome tweeter with a short acoustic guiding, similar to those found not only in the L100, but also in other JBL creations over the years (and often appreciated therein). The L82 does without the midrange driver and splits the spectrum at 3.5 kilohertz between the two drivers. This happens one octave higher than in the L100 between midrange and treble, but still works quite well and without a break.

The grille, i.e. the cover, is available in blue, orange and black and can also be purchased later.

During our review of the L100, we commented somewhat disapprovingly on the cover; not about the looks, but very much about the influence on the acoustics. Not everyone liked that, which is why we measured it this time. We were surprised at how little of a difference the cover actually made. At least in terms of broadband. At five kilohertz, it damped the frequency response by almost two decibels, which isn't a small bit either. Anyway, we would take off the pretty covers for more serious music listening and we'll stick to that.

By the way, a control knob on the front also allows for a slight adjustment to the room's condition. Putting it in simple terms, the tweeter can be turned down a bit in a surrounding reminiscent of a modern architect's office, which is rather cool and not very damped; and on the other hand, turned up slightly in a heavily damped living room lined with cushions. This feature is by no means to be underestimated, as many others don't offer this.

Appealing, pleasing and immensely fluid, that's how this transducer produces music. Any kind of music, in fact. It is coherent while always staying on the full-bodied, slightly tempered side of the spectrum with a concise foundation and good, easily consumable reproduction of details. Admittedly, it does not offer the most refined spirit, and in this respect it is not on par with the significantly larger JBL L100, which is twice as expensive. In the company of high-end speakers of different, but similarly expensive provenance, with their exquisite housings making them appear more aristocratic, it does seem somewhat coarser, more pragmatic – but no less likable. Admittedly, it is not that cheap either.

The L82 provides plenty of fun, we enjoyed every second of "Growing Up In Hollywood Town"; the sensitive piano playing of Lincoln Mayorga as well as the stunning voice of Amanda McBroom and the interludes, with their big band/orchestra. In terms of dynamics, this JBL is hard to beat by other standmount speakers, especially since it is also extremely level stable. It is not, however, a completely neutral monitor speaker that provides the most delicate elaboration of the smallest details, hues and moods. This is not to be seen as a faux pas, but simply a fact. In a small home theater, for example – we tested that – I found it to be quite outstanding, because it delivers good speech intelligibility and also an extremely dynamic as well as lively performance with the "bang" that is so appreciated in this field. Really very, very good.

Thus, this speaker from JBL is undoubtedly a musically appealing device with tremendous playfulness, but it's definitely not quite as universal as the bigger model. The music lover, for example a fan of rhythm & blues, country or rock will appreciate it very much, while the audiophile, rather wanting to listen to classical chamber concerts, might possibly do so a little less, even if it does not fail there by any means. On the other hand, it would again be in its element when playing "Tutti con fuego" in close-to-original volume.

If you know this, it is of course easier to make a decision. In the same vein, the JS-80 stands are recommendable and probably better suited to these classic speakers than any other. Still, there are definitely alternatives, at least in terms of sound, even if the JBLs may not be as elegantly tilted backwards on them. Either way, pay attention to the ear height of the tweeters when choosing a stand. We would also angle it very slightly to the listening position and drive it with rather gentle electronics; then it can take on most opponents.

Conclusion: There's something about it – I, for one, think this little JBL speaker is great!

Quite large compact speaker of a high class that sounds as lively as it does rich and voluminous. Very classic, but valuable appearance. Not the most refined in the audiophile sense, but always provides for a good mood and listening fun! 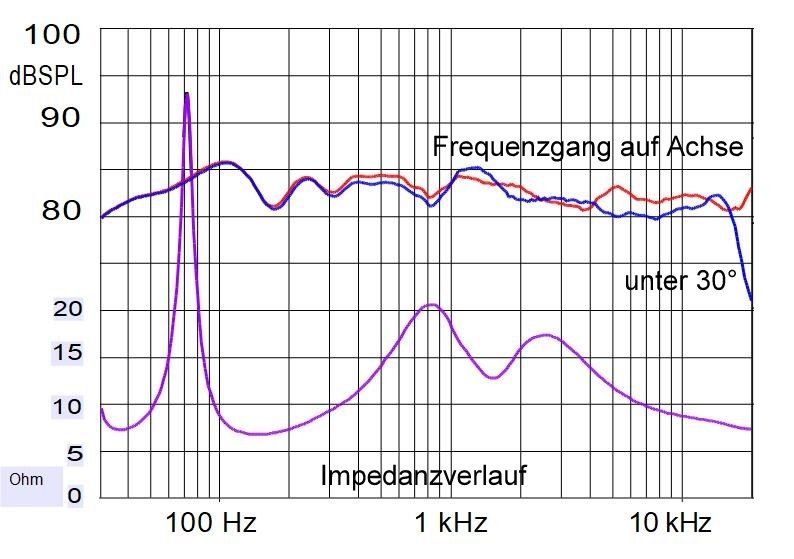 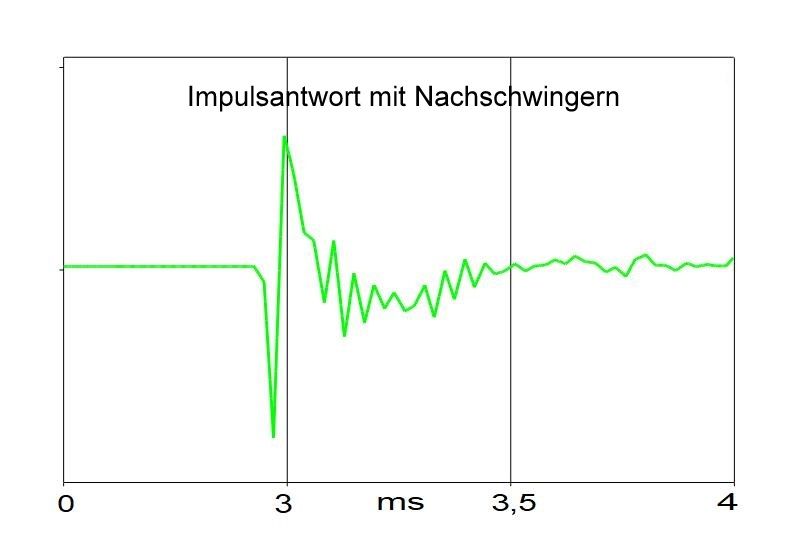 This album has been in my possession for almost 40 years, both on vinyl and CD. The alternating vocal and instrumental pieces of the quite excellent musicians still make for one of the best sounding albums ever, impressing with both fine and coarse dynamics. The very admirable Amanda McBroom is especially worth listening to. 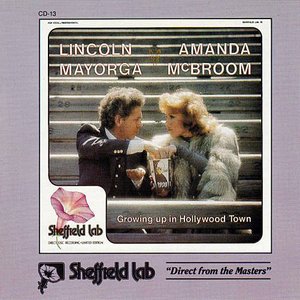