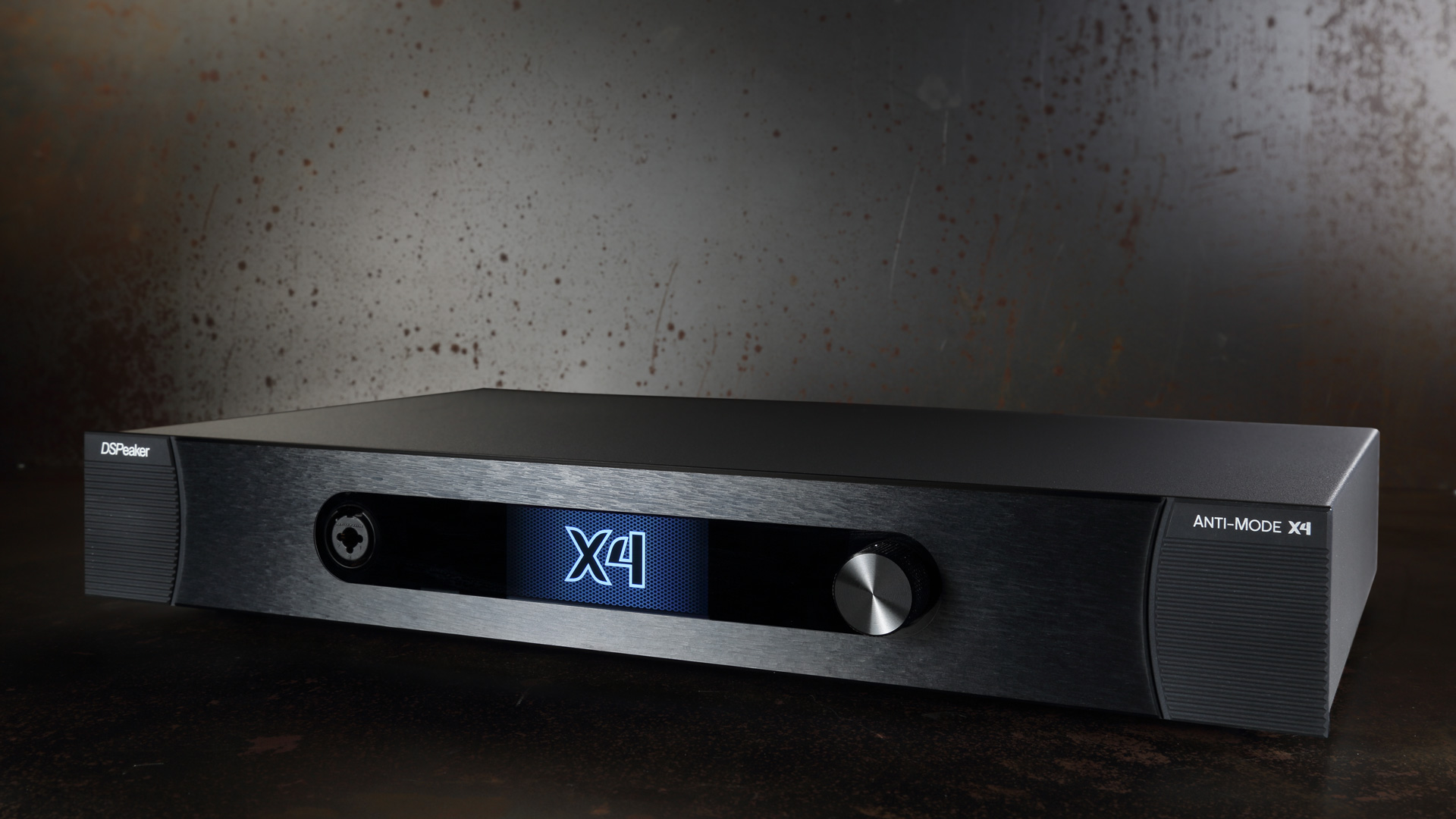 Multiple Choice – The X4 preamplifier from Finnish manufacturer DSPeaker is as versatile as it is intuitive and aims to help any system achieve its full potential thanks to an integrated room calibration. Let’s see if it can accomplish that goal.

"What's that supposed to be?" was our instantaneous question when a package with the strange dimensions of 75 (!) x 14 x 50 centimeters arrived at our office not too long ago – may this be the first product to establish a new hi-fi standard size of 75 cm?

It gets even better under the plain cardboard box, where we don't encounter the usual "nothingness" stuffed full of fill material, but actually a white box of the same width, labeled "DSPeaker Anti-Mode X4 – High-End Processor | Preamplifier | DAC" – the first impression seems right.

We lift out the actual box, open it and – with great relief – realize that no attempt whatsoever to introduce a new standard size for hi-fi products reached us from Finland. In fact, the X4 is modeled in the very classic size of 43 cm. Still, where did the dimensions of the packaging originate? The answer is partly to be found in the philosophy of the Finns, for example in their Anti-Mode Dual Core 2.0. This product, preceding the X4, combines technical complexity with highly simple plug-n-play operation, so that there are quite a few accessories in the box.

This concept is consistently pursued and refined in every aspect in the X4, itself the high-end brother of the Dual Core. Thus, it's not really astounding that DSPeaker wanted to offer more than what was used previously for room calibration – more on this later –, a cable with attached measuring capsule. Therefore, they provide a high-quality professional microphone with balanced connection in its own hard case as well as a full-fledged and not exactly small stand, directly in the box. An undoubtedly extremely elegant solution, which is to blame for the exotic packaging dimensions.

Less exotic, however, is the visual appearance: a mix of chic, modern and high-quality understatement is coming into play here. The X4 is available in either black or silver with a thick aluminum front panel that has a subtle but visually appealing structure at the edges. The focus is clearly on the rather generous color display, and no buttons, knobs or sliders draw your glance away from it.

A single knob with a nice rich feel serves as volume control, menu navigator and selection button at the same time. Apart from that, the only thing left on the front panel is the connection for XLR and 6.3 mm jack (in one). It might look a bit unusual for hi-fi trained eyes, but is actually used especially in the professional sector. This is where the calibration microphone or headphones are connected. All in all a quite thorough reduction down to the fundamentals.

The back, however, presents a different view: you really cannot speak of "reduction" here, because naming all these inputs and outputs would be too much right now. Apart from a phono preamplifier, everything you could wish for – in terms of analog and digital inputs and outputs – is represented here in large numbers.

Especially noteworthy is the division of the outputs into "Primary" and "Auxiliary", mainly intended to integrate subwoofers into the system of loudspeakers. In such a configuration, the X4 can also be used to perfectly tune the setup directly. It will determine the best crossover frequency and include the subwoofer(s) in the room correction.

Of course, this all happens on a digital level, because the X4 basically digitizes all incoming signals first using Burr-Brown PCM1804 chips. The internal signal processing then takes place at 24 bit/192 kHz – a giant step forward from the predecessor "Dual Core", which still worked at 48 kHz internally. If using the analog outputs, the signal is converted back to analog voltages after processing by Burr-Brown PCM1792A D/A converters.

On a side note, the DAC chips are all individually tested in the factory in Tampere, Finland, by a special test device and sorted into different quality levels before further processing. Only the very best are then used for the primary outputs, and about a quarter of them are completely sorted out.

Since the X4 is also a fully-fledged preamplifier, you can directly connect a pair of power amplifiers or active speakers. As an alternative to the analog outputs, it can also produce signals without any conversion by means of an optical and a coaxial digital output. The signal at the digital outputs is still absolutely identical to the signal at the analog "main outputs".

With such a variety of connections – and the promising label "High-End Processor" – you can imagine how many options there are to discover in the menu. To name just a few of the almost endless possibilities: you can adjust the frequency response with different means completely to your own preferences, change the sensitivity of the inputs, increase the gain, switch the DAC filters, change the color of the display or choose between six profiles, each of which you can configure freely.

In addition, the menu item "Anti-Mode" can be used to call up the results of the room calibration and to influence its efficiency and range. If you are now – certainly with reason – afraid that such a device will inevitably have downsides waiting in its operation, you will be amazed at the simplicity of the X4.

The best example of this is the room calibration itself: because equalization with the help of a DSP is a complex matter, making matters worse due to a lack of knowledge or technical expertise is common when using comparable products.

The DSPeaker, on the other hand, manages to hide the immense complexity of the subject behind an incredibly simple user interface – to make serious mistakes here, you have to aim for them.

The device changes automatically into the calibration mode as soon as you plug in the microphone – this also applies to the headphone mode, which is activated as soon as you plug them into the jack. If you then select the top item in the menu under automatic calibration, you only have to position the microphone at the listening position, select the setup to be tested and adjust the volume.

Confirm once again and the process starts, which is both faster and more precise than the predecessor Dual Core. At the end of the calibration, simply unplug the microphone – and you're done. For us, this took less than five minutes and did not even require a single glance at the instructions.

Even better: this concept is apparent in the entire menu, which, despite all the possibilities, is never overwhelming, always reacts quickly and precisely and is structured logically so that you can find every function you are looking for immediately. In addition, all functions of the X4, without exception, are operated directly via the integrated display.

At least at the time of the test, there still were a few small downsides: The menu navigation, just like the operating manual, is currently only available in English. Also missing is the function to export calibration results, as we knew it from the Dual Core. Both will be added later, according to the German distributor AK-Soundservice. We also dearly missed a standby button on the device. Switching off is only possible from a distance.

For this, DSPeaker has an app ready that allows you to connect the X4 via Bluetooth to your smartphone or tablet and control it from there. A beta version of the app for Android is already available in the Play Store. The version for iOS devices will be available in the App Store in the future.

We first listened to the X4 in its factory state to determine the sonic "Basis" it delivers. There, we were already quite surprised, because the device already sounded quite good as a pure preamplifier without all the DSP mechanisms.

Completely balanced and wired to our reference power amp, it sounded clean, clear and open at the same time, but also with natural warmth and distinct timbres. The tonality was right, impulses came springy and without exaggerated hardness. You may hardly believe it, but the fully digital X4 sounded "analog". How good must it be with room calibration was all we could think of.

To answer this question, we listened to it with Anti-Mode in three rooms and with different speakers.

In our test living room, which was hardly optimized in terms of room acoustics and had a mediocre speaker placement, Anti-Mode provided enormous improvements: a previously extremely annoying "droning" was completely eliminated and the tonal balance was restored. Matt Elliot's deep voice in "Farewell to All we Know" now was separated much better from the background and was much clearer without losing volume. Deep Purple's classic "Child in Time", after the Anti-Mode treatment, impressed with improved structure and even tighter rhythm.

Then we wanted to try out the Anti-Mode calibration in our acoustically elaborately optimized small STEREO listening room, with a size of about 20 square meters. To make sure that the X4 really does what it is supposed to do, we used the large DALI Epicon 6 speakers, which are almost a touch too powerful for our smaller listening room. Here, as expected, the result of the calibration was less extreme, but still mostly positive and depended much more on the chosen music. With songs like "Not My Time" by Son of Fortune, which emphasized the problematic frequencies, the calibration had a clear advantage, because the bass was more tight and crisp, while the overall impression was faster and better balanced.

Last but not least, we wanted to find out how the room calibration of the X4 behaves under almost ideal conditions. To do this, we went over to the large STEREO listening room, measuring about 40 square meters, and used the rather small but very potent JBL L100 Classic (reviewed here). Even without calibration, the performance here was almost perfect, and we were curious to see whether Anti-Mode could get even more out of it.

The result of the measurement left us somewhat torn. On the one hand, the bass range of Monty Alexander's "Moanin'" (from our STEREO Test CD VI) actually came out a bit freer and more focused, while the overall sound seemed more agile. However, we now noticed a minimal tonal distortion in the midrange, which appeared more synthetic and less colorful after the correction. Compared to the improvements that Anti-Mode brought previously, this is still only a minor issue.

And fortunately, the DSPeaker Anti-Mode X4 is much more than "just" a high-end room processor. It handles all tasks from conversion to operation to pre-amplification on the highest level. It also offers the extremely useful extra of very simple Plug 'n' Play room correction as well as many possibilities for individual adjustment.

If you want to give the subject of room calibration a chance or are on the hunt for a good digital preamplifier,the DSPeaker X4 is definitely the ideal partner. That’s how fun "multiple choice" can be!

The X4 is the most expensive but also the best product so far from Finnish manufacturer DSPeaker. The fully digital preamplifier is extremely easy to use and sounds great right from the start. Together with the Plug 'n' Play room calibration and the many inputs and outputs, the X4 becomes a highly competitive jack-of-all-trades. 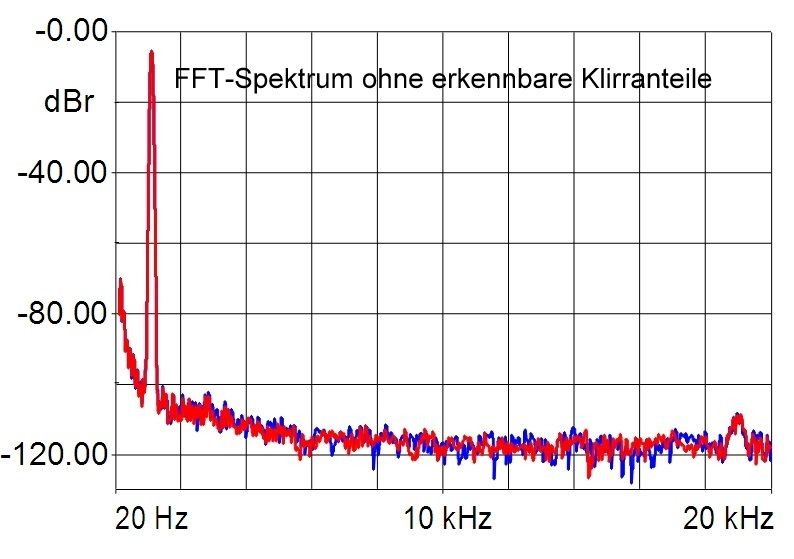 The X4 showed no mistakes in the laboratory. Jitter spectrum and frequency response are good.

The Digital Signal Processors are responsible for the whole processing and adjustment of the audio signals. They are thus the most integral part of the DSPeaker Anti-Mode X4, which is even named after them.