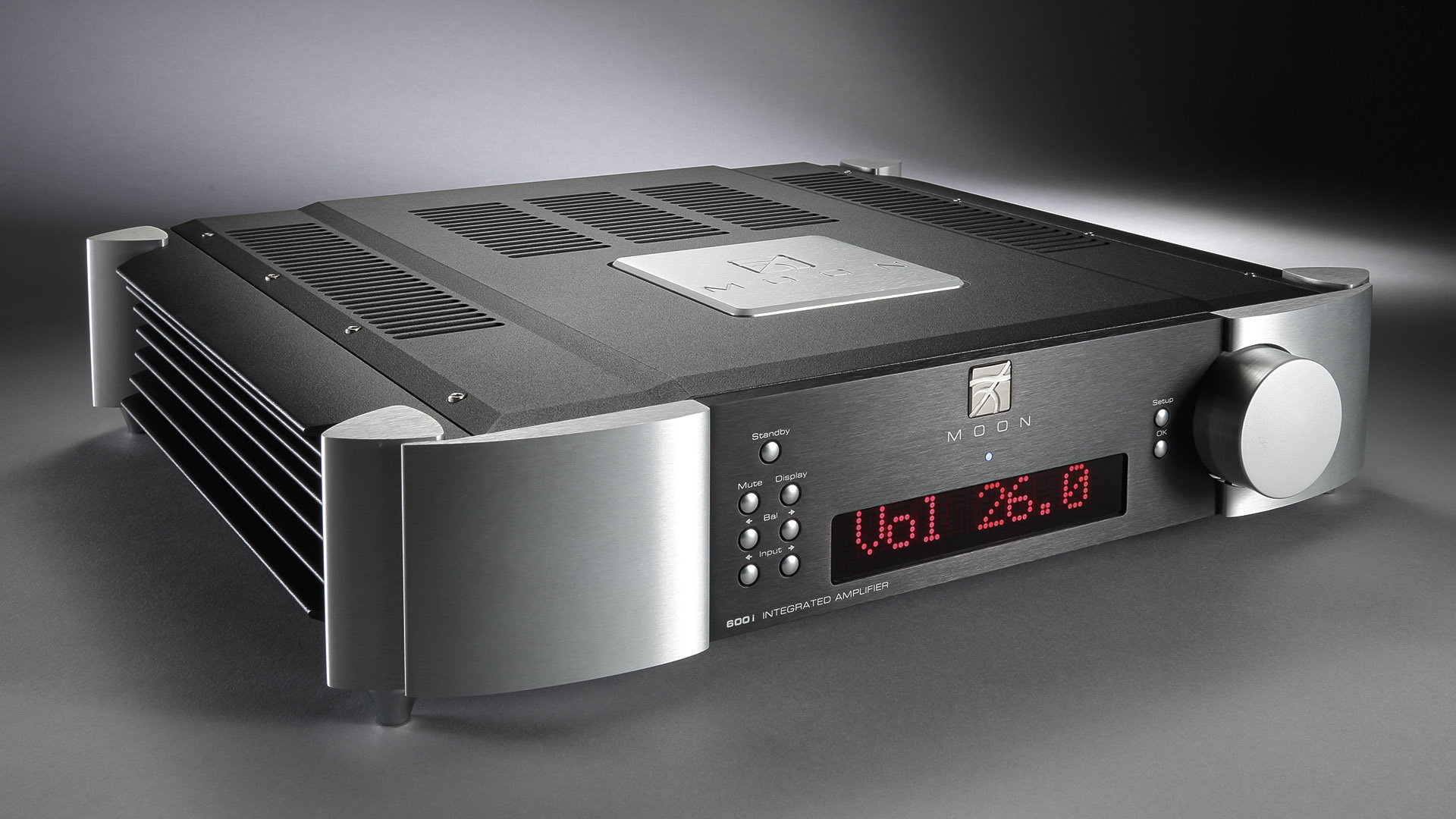 The Moon from Canada – What sounds like the title of a childrens bedtime-story looks more like a picture book for adults. The Moon 600i is a dream of an amplifier.

Wow! This one looks great! Okay sure, such enthusiasm is certainly a matter of taste, but the design of this Moon integrated amplifier from the Canadian Simaudio company – recently sold by the Scandinavian Dynaudio – which promises top quality in terms of technology and materials also keeps its visual promise. It is anything but obtrusive or showy to look at; the silhouette is rather noble and flat than bulky and superficial. Also, this amp is not entirely new, as there was already a test in the german STEREO of its similar predecessor almost eight years ago. Already in 2012 this amp was a force to be reckoned with.

Since it has now been reworked into the "Evolution V2" and is still one of the most attractive offers on the market, we have given it another chance to confirm or even surpass the previous top results.

The term "reference dual mono integrated amplifier", accompanied in the manual by "world class", testifies to the healthy self-confidence of its creators.

In most cases, a brief glance underneath the hood allows further conclusions to be drawn. As usual, it took place in the photo studio.

The inputs are switched via relays, the energy supply is provided by two channel-separated and very generously dimensioned low dispersion 400VA toroidal core transformers from Japan together with an armada of improved, proprietary Moon capacitors. In fact, the toroidal transformers also come from Moon‘s own creation with even lower electromagnetic-thermal losses due to special manufacturing for higher speed and dynamics. The circuit topology relies on special, extremely linear and "fast" power transistors of the bipolar type, which were developed and manufactured especially for Moon.

These are mounted on the sides of heat sinks, which cleverly use the robust and particularly low-resonance and stiffened housing. Thanks to the "Lynx" concept, the amp is free of "negative feedback", the so-called "open loop" operation is reflected in the good, but not exaggerated distortion measurements. Local feedback is only used discreetly in the low frequency range. No compromises where made in regard to power.

Nearly 130 watts at 8 and 210 – for short-term peaks even more than 270 – watts at 4 ohms, are not exactly weak on the chest. This should easily be enough for medium efficiency loudspeakers and normal living rooms. The "Line Out" at the rear can also be configured as a regulated preamp output and can be combined with an additional stereo or two mono amplifiers or a subwoofer if required.

Up to about five watts, the two power amplifiers operate in Class A. By the way, "Standby" on the Moon actually means that the amplifier remains "in its core" ready for operation, which is intentional, because the sound is better. If, however, you don‘t use it for a long time, you can also switch it off "hard" on the rear.

Nevertheless, during the three-week test cycle sound literally got better with every hour and every day on the grid. This should not be neglected. If the amp has been disconnected from the mains for a longer period of time, it is best to allow it some "warm-up" time. By the way, this is not uncommon with high-quality devices. Capacitors have to line up, the optimum operating temperature and the corresponding operating points for top sound have to be found.

The whole thing seems well tailored and is technically very clever, in parts solved by traditional means but in a modern and noble dress, which I personally find on the one hand calming and on the other hand absolutely stunning. Of course, the 530 level volume control from the 850P preamp runs via MDACs with a resistor network, and the signal isn‘t degraded regardless of the setting. This can be seen extremely well and similarly with other top amplifiers (for example of Japanese provenance), of course, then, with much more marketing about it.

There is also a home cinema mode, and name, sensitivity and maximum volume are configurable for each input (M-Lock), which is really a great feature if you got some teenagers in the house.
Obviously short signal paths and perfect grounding thanks to four-layer copper circuit boards should result in exceptionally good freedom from interference.

The red, dimmable and switchable display is easy to read even from greater distances and even with poorer eyesight. The distinctive remote control is a well thought-out, congenial addition. Valuable virtues from the good old days can also be found haptically, as, after all, great amplifiers were, with a few exceptions, always as heavy as lead – and this one weighs almost 55 pounds. The solid, large volume control knob also inspires confidence – an impression that is reinforced when using it.

An excellent old-school integrated amplifier. No bells and whistles, but a purely analog Class A/B sound machine with a signal path that does what it‘s supposed to do with outstanding elegance and musicality. While the 600i already set a high standard, the V2, modified in details in power supply and preamplifier, surpasses it once again. It plays absolutely effortlessly and dissolves details very finely without disrupting the whole – pure finesse. In addition, it has plenty of power, which it can transform into physical pressure.

From the movie "Bohemian Rhapsody" and especially from Freddie Mercury, we put the Canadian to the test with "News Of The World" and "Jazz", where the exploding "Don‘t Stop Me Now", one of the eternal favorites, is to be taken literally: the listening session with this amplifier was so much fun, that it went much longer than usual and from rock to classical (Mozart) to jazz (Hancock) all the way through our CD/SACD portfolio. Focus, enjoyment and power, as well as possibly a bit more tightly carved bass impulses, mark his way.

This is absolutely a component somewhere between "I‘d like to have it" and "I really want it". The V2-Moon might not be cheap with its price of about 9000 Euro, however it is still worth every penny! And, as I said, it not only sounds great, it also looks like it! Yet another thing you simply have to love coming from Canada.

Potential buyers with larger archives in silver-disc form should probably also take a closer look at the CD player 750D, others at the matching streamer. Just Outstanding!

With „Bicycle“ and especially „Don‘t Stop Me Now“ an unforgettable album of the super band around frontman Freddie Mercury.