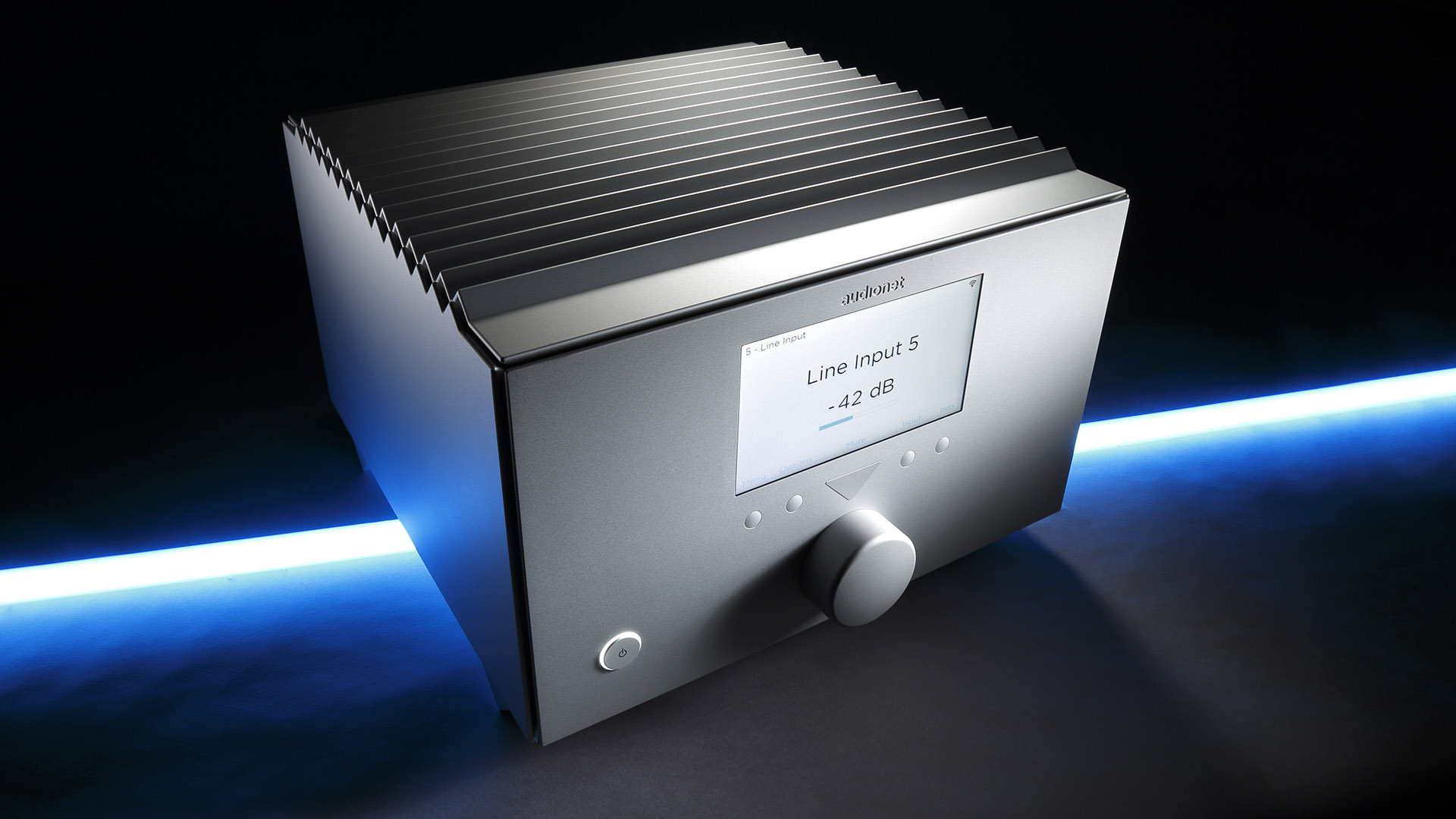 The Giant from Berlin – Around a quarter of a century has passed since Audionet came onto the market with the Amp1 power amplifier, which convinced both experts and customers, and a little later conquered the hearts of music lovers with the SAM integrated amplifier. Since then, a lot has happened, demands and possibilities have grown – up to the amplifier of superlatives Humboldt, which will be the subject of this article.

I don't like this. Carrying boxes that I can't move on my own because they're too heavy and too unwieldy, and that I can't get out of the flight case or onto the shelf without help. In this case, this box easily weighs 70 kilograms, of which about ten kilos come from the flight case. That leaves 60 kilos of aluminum, copper, silicon and various metals inside. At least it's beautifully and elegantly designed. It has a housing created by the famous German designer Hartmut Esslinger, who also designed some of the iconic Apple products and gave many of the legendary WEGA devices their distinctive look.

After unpacking, this monument of an amplifier stands before me. Designed with no regard for anyone or anything – my back included. To be able to lift this giant onto a shelf, you definitely need two "helping hands" – and they should be able to grip powerfully and be connected to a certain amount of muscles on the respective arms. The shelf should also have been checked for its carrying capacity beforehand.

Once these obstacles have been overcome, one is allowed to marvel in awe. Where certain amplifiers from the league of the unattainable – for us mere mortals – look for attention with bling bling and optical noise, the Humboldt convinces with a simplicity and elegance that redefines the term design for hi-fi devices. The optics are by no means an end in itself, however – microphonics insensitivity and constant stable temperature conditions for the entire circuit were also considered and provided for. They are effectively implemented in the design of the cabinet, in which the separate solid aluminum panels give the Humboldt, despite its dimensions, an unique lightness, indeed, something almost "floating".

The "roof" is charming with its jagged edges, which are supportive in the job of heat dissipation by ways of the many small holes. Where other devices are overloaded with glaring displays and more or less precise fidgeting to the beat of the music – and you're glad to find a way to curb light pollution with the dimmer button – the Humboldt proves that there's another way with its large, mildly luminous display that can be dimmed in several steps. It shows the selected input, the current volume ratios and the functions of the control buttons from menu selection to muting.

Inevitably, you will want to reach for the level control – a large wheel that sits comfortably in your hand and allows for very sensitive changes to the volume. Its of the kind that makes you think twice about even unpacking the remote control, because operating it directly on the amplifier is such a great haptic experience. These mechanics are of the best kind. The technology behind it is no less elaborate and far removed from the compromises that a normal potentiometer entails.

The topic of relays for volume control has also been done away with. The Audionet development team has succeeded in creating a new type of volume control that consists of a discrete resistor network, designed with the most expensive metal film resistors, which separates signal-carrying and controlling functions by means of optocouplers. The switches used for control are made of MOSFETs and are freed from signal-damaging influences by a feedback system operating in real time. The large volume control wheel, which offers this wonderful haptic feel, is thereby optically scanned with every of its movements. The point of all off this: to bring noise and distortion down to new all-time lows.

Of course, though, a highly complex volume control alone does not make a great amplifier. That's why the developers from Germanys capital Berlin also paid close attention to all other important aspects of amplifier design. The shortest possible signal paths should ensure perfect impulse response. The power supply is equipped with a total of four transformers, two of which have about one KVA each and a capacitor bank with a total capacity of 400,000 microfarads, so that the Humboldt can handle low impedances and adventurously phase-wound loudspeakers unimpressed. Added to this is a circuit design that has been carefully optimized magnetically and capacitively.

So that the gate to the music will always be wide open, a very broadband circuitry in DC technology, which does without capacitors or coils, has been developed. But not all source devices deliver absolutely clean, DC-free signals. These DC parts can be filtered out in the menu if desired.

Low distortion and an impressive damping factor complete the flawless picture of the amplifier. Are you perhaps wondering why there are so many components in the Humboldt, considering the circuitry was designed to be as short as possible? The Berlin-based developers always rely on self-constructed operational amplifiers for certain tasks. Each of these "OPs" consists of 86 individual components. In addition, there are control circuits for operational reliability under all conditions, the software and various other assemblies, but none of these are in the signal path and thus do not force the music on any detours.

The ambition of the Berliners, however, was to present perfection on all levels. So it is only consistent that the Humboldt is technically actually an ultimate, double-mono preamplifier, under whose roof two powerful mono power amplifiers are included.

The fact that even apparent trivialities such as gold-plated or rhodium-coated input jacks as well as the torque speaker terminals from Furutech are used shows that not even a hint of a compromise was made. Curiosity and the unconditional desire to get close to this extraordinary device not only drove us to the newly established Audionet factory in Berlins district of Spandau, but also ensured that we spontaneously spent a few hours in the acoustically optimized listening room there and were overwhelmed by it. The impressions gathered there finally made us decide to load this giant into our car, to listen to it back home, in our own listening rooms, together with a wide variety of loudspeakers.

What then began can quite certainly be counted among the greatest moments of a hi-fi life. As a STEREO editor, one can justifiably count oneself among a rather privileged group of people when it comes to dealing with exorbitantly expensive and high-class components. However, seeing how effortlessly the Humboldt was able to destroy and overshadow its opponents was an almost shocking experience.

The first loudspeaker we connected to the Humboldt was not really suited to unleash the qualities of this amp, considering it was the semi-active Avantgarde Acoustic Duo XD (Reviewed here). This one already had plenty of efficiency and its own amplifier for the woofer. Still: The way the Duo now presented itself came close to a transformation that reminded us of the capabilities Photoshop has when it comes to image editing. "The End" was played right at the beginning this time. The Doors classic from 1967, on the one hand, floated almost weightlessly through the room, while the apocalyptic mood pressed more intensely than ever before on your mind at the same time. What amounts of power and intensity was tickled out of the recording, technically anything but audiophile, was quite hard to grasp.

The differences became even more tangible when the Humboldt was also allowed to prove its worth in the low frequencies. Our STEREO reference speakers B&W 800 D3 go really deep down to the lowest frequencies, and then also demand corresponding power and at the same time expect that the preceding components do not gloss over or even withhold any information. As drummer John Densmore works the drums and cymbals with power and similar impulsivity the Humboldt clearly distances itself from the competition. The differences are so tangible, in a way that is normally not seen in other amplifiers.

We kicked it up a notch when we heard the funky, soulful song "Compared to What" by Philip Bailey. Bone-dry, deep bass, ultimate joy of playing, and a stage reproduction that made you feel like you were transported into the recording room. Don't like funk music? Listen to the Humboldt with that music, and I'm pretty sure you'll change your mind. This amplifier makes access to music so easy and in such a way that after a short time we are left with the anxious question of how we are going to manage to deal with this "point of no return"...

The Humboldt is also in a class of its own when it comes to revealing differences between various cables and components. It's not picky or even moody about synergies, but it does clarify the characteristics of the preceding equipment, as speakers are sometimes said to do. One example: the HMS Suprema cable has adjustment options to optimize the harmony between amplifier and loudspeaker. The differences are often so small that it takes days to decide on one position as the "right" one. The Humboldt not only shortens this time span, but at the same time reveals that previously held truths regarding switch positions must be questioned.

No questions were left unanswered regarding the class and uniqueness of Martha Argerich. The "Lioness", this time in duo with Mikhail Pletnev, and enjoyed over the Humboldt, breathed new life into both Prokofiev and Ravel. Here, too, the Audionet "über-amp" acted as a giant refreshment, providing lightness and precise accentuation, and demonstrating along the way that control and passion need not be opposites. This performance was complemented by an audibility and richness of detail, especially in the presentation of the most delicate keystrokes and subtle spatial information, so that listening to it was nothing but pure pleasure. Since the Humboldt's power range is also more than rich, there was no breathlessness in the form of compression effects or even audible distortions even at very high levels, such as we entered with Radiohead's "Amnesiac" album or various Beethoven symphonies. The contours as well as the tonality were always preserved, and spaces did not narrow, no matter how complex the program might be.

We listened for a long time and looked to see if we could find a, possibly even bad, compromise at any point – but we did not discover even the slightest one in our search. From today's point of view, the concept of this amplifier, which is consistently handcrafted by a specially trained Audionet employee, seems to us to be absolutely flawless. The Humboldt is positioned above any possible criticism, it simply does not show any weakness. Those who can afford it and have so far considered spacious pre/power amplifier combinations in order to reach the sonic nirvana may need to rethink. From now on, even the best separate amplifier combos have a serious opponent in this milestone from Berlin. However, it is withdrawn from a classic rating in view of the price tag.

The Planet Humboldt shines like a particularly bright star. It distances itself from everything we have heard and tested so far in terms of integrated amplifiers. Unfortunately, it also eludes any serious comparability in terms of price. A luxury dream only few will achieve. 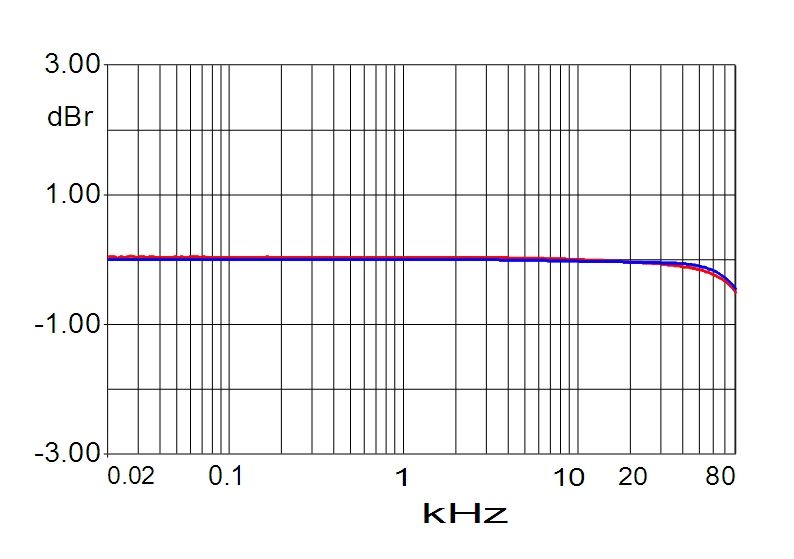 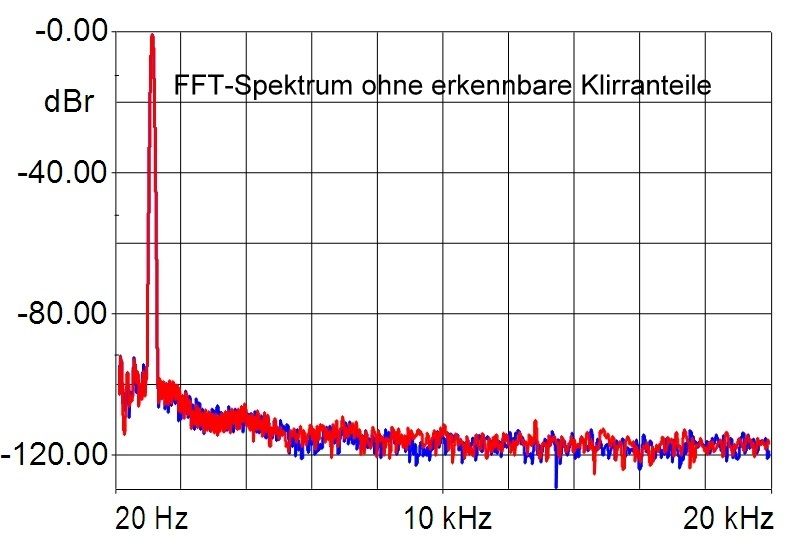 All measurement results are impeccable; very powerful, impedance-stable, broadband and low-noise. We don't know of a loudspeaker that the Humboldt can't drive properly.

Beginning and "The End" of the Doors –  a milestone of rock music. 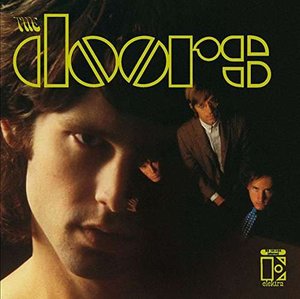