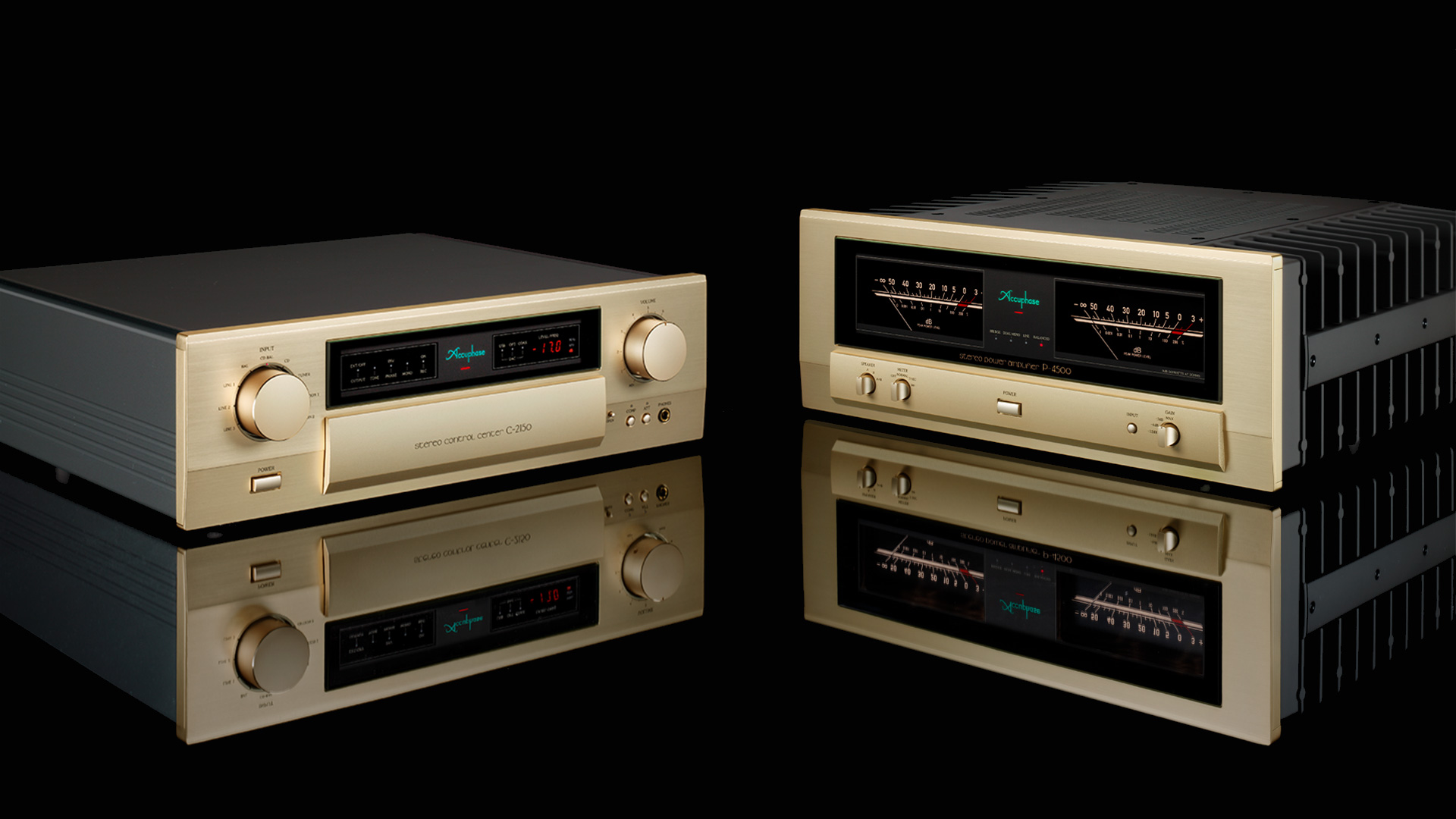 The Only Way Is Up – Like the gold price, Accuphase only knows one direction of development: upwards. With the new C-2150 and P-4500 pre-amplifier/power amplifier combination, the manufacturer has once again surpassed itself.

Bank savings and deposits haven't been yielding much interests for some time now. Many are therefore looking for better investments – such as gold. But what about a high end investment that yields a rich return in sound? The Japanese luxury brand Accuphase tempts people to do just that and wants to keep the promise made by the elegant, pale gold shimmering front panels of its components. Our experience, as well as that of many owners, speaks for itself.

The small C-2120/ P-4200 pre-/power amp combination proved to be one of our special highlights of 2015, with the Pre having conquered the reference class in no time, and the power amp having gotten very close to doing the same. Although the set price of 14,500 Euros, which recently rose to 16,500 Euros due to modifications, was certainly high, it still was reasonable: after all, apart from exquisite sound quality, one also got the Accuphase typical fine workmanship, the usual comprehensive equipment package as well as the resulting pleasurably stable resell value.

For some people, a resell could now become an option, as the manufacturer from Yokohama has just replaced its successful combi, with the successors – supposedly raising the bar yet a bit higher. Anyone following the company's almost 50 years of history knows about their engineers' everlasting pursuit to climb the ladder of quality yet a bit higher by making small improvements in many areas in order achive a real step up.

This is exactly how one must imagine the evolution towards the new duo C-2150 and P-4500, which cost around 15,900 Euros together. As usual, a closer look is needed to identify the new from the old ones, because although some optical retouching has been done here and there, they still are very similar to their predecessors. This consistency in design is also highly appreciated by loyal Accuphase fans.

Behind the thick front panels one finds the usual design structure, which has not been changed in decades. The output stage with its massive power supply in the centre and the power electronics pressing against the edges formed by prominent heat sinks should have the highest recognition value here. Since 2004 we are also used to the PCB banks at the heart of the preamplifiers, as it was that year when Accuphase introduced its ultra-complex "AAVA" volume control – meaning "Accuphase Analog Vari-gain" – for the first time with the C-2000. AAVA combines 16 currents as the active part of the amplifier in such a way that thousands of intermediate values are created, allowing for an extremely sensitive and precise volume adjustment.

The C-2150, which operates five different amplifier units for buffering the inputs and voltage/current conversion, as well as the output stage and the separate headphone stages, is the fourth generation to use AAVA. It further makes use of the recently added "Ultra Low Noise Technology" in form of a secondary amplifier in the main circuit, which is intended to further reduce the already very low level of interference. With the "Accuphase Noise and Distortion Cancelling Circuit", or ANCC for short, the developers are aiming for a previously unattainably low noise and distortion.

In fact, most of the distortion and intermodulation values of the C-2150 have three places behind the decimal point and are thus up to a power of ten lower than those of the already excellent C-2120. In terms of noise, the new C-2150 outperforms its predecessor at least in the lower voltage range, i.e. at normal listening level, with a signal-to-noise ratio increased by up to four decibels. A mature achievement!

The fact that the C-2150 offers a lot of features that are not found – and may even be missed – on many other preamplifiers is a "tangible" advantage. In addition to a tone and balance control – the latter is realized without additional components in the signal path through using the AAVA – it offers a mono switch that does come in handy from time to time, a 180 degree phase reversal for correction of source material with a wrong phase, and even a switchable record output with tape monitor option. In addition there is also a headphone jack as well as a wide range of inputs in XLR and RCA versions.

The base amplification of the C-2150 can further be preselected in three different stages using the "Gain" switch, which is really something special. We recommend the lowest "12dB" setting, because this is not only perfectly adequate for common high level sources, but, more importantly, provides the lightest and most natural sound. At "18dB" the reproduction is only a bit more crisp and edgy, which can be quite appealing for pop music. If you switch to "24dB", however, you get somewhat "glassy" mids with a slightly artificial touch. This can be easily tested by adjusting the six dB level jumps on the AAVA's volume display, which is accurate to a tenth of a decibel, and thus always obtain the exact same volume overall.

If the new Accuphase-Pre didn't sound so high class, we wouldn't even mention this detail. But what the C-2150 offers in genuine naturalness – I can't think of a more appropriate term – is simply magnificent and yet again an improvement over the replaced C-2120. Where the latter still blew a tiny breath of artificial brightness over the tones, it is now completely gone, with the performance running sonorously and homogeneously in front of a pitch-black background.

The Japanese also lacks everything pretentious, dressed up and recolored. One notices the absence of tiny noises or artefacts within voices and instruments that might otherwise have been assigned to the recording and that suddenly become noticeable when switching to some other preamplifiers because they are completely missing with the Accuphase. Instead, the sound events appear extremely coherent and completely "untechnical" as well as plausible, which leads to the paradox that the enthusiasm for its performance stems precisely from the fact that this pre somehow doesn't do anything.

That an Accuphase has a light and lively sound and treats fine dynamics highly sophisticated would hardly be news; in fact, that is common knowledge. That it celebrates these characteristics with such tonal coherence as the C-2150 does, is however a surprise. Not only with Maria Pihl's "Malvina", which we have heard so many times before, the Japanese succeeded in a first-class performance with bright colours, perfect representation of the wide spectrum and exemplary tonal integrity. Also delicately chiselled high-bit files with hi-hat veils drifting into audiophile nirvana were among the Accuphase's favourite foods.

Now I'm certainly not a measurement fetishist, but this combination of superb purity and silence with the necessary, I repeat, naturalness makes me wonder whether the additional zero behind the decimal point might not just be academic after all.

Let's take a look at the power amplifier and its almost sensuously swinging meters, which are carefully damped in the return. Those who don't like the fidgeting can switch it off along with the lighting. The P-4500 also shows a halving of the distortion values, especially in intermodulations. It may be that the noise reduction of 43 percent in the balanced input amplifier, which Accuphase claims compared to the old P-4200, was achieved. In our measurements the amp was not able to undercut the excellent noise values of the replaced model.

As usual, the power electronics were mounted directly on the side heat sinks. Four bipolar transistors per channel operate in Accuphase's favored push-pull circuitry with two "hot" outputs, thus ensuring a fully balanced approach throughout. MOSFETs work as ultra long lasting switches in the two loudspeaker outputs, which end in solid terminals and are protected by a special circuit that is attentive to overload or short-circuiting.

We were most curious about whether or not the power amplifier could match the fantastic preamplifier, or if it could possibly be a limiting factor? Answer: Not at all! What the P-4500 develops in terms of conciseness and speed is worthy of great respect. As if out of nowhere, it made the hard, precisely placed vibraphone attacks in "Saturday Night" by the Red Norvo Quartet pop up between the speakers, even provided for drawing and timbre within these tiny explosions and staggered the audience that was babbling along at the correct depth distance from the perfectly tuned band.

It was largely irrelevant with what loudspeaker the Accuphase cooperated. Whether it was B&W's demanding 800D3 or the outstanding Confidence 50 from Dynaudio – the Danish loudspeakers traditionally pair well with the amps from Yokohama – the P-4500 delivered any program extremely well ordered and spatially staggered, but at the same time provided a powerful smoothness together with a great "drive" and was even good for real goose bumps, which is exactly what happened with "Tres Luceros".

After an immensely realistic guitar prelude, Sandra Rumolino's voice captivates the listener only to be joined shortly afterwards by impulsive drumming in the bass – and everyone listening felt a pleasant shiver down their spines: brilliant! The power amplifier can therefore build up musical tension just as much as its preamplifying partner and both Accuphase can be described by "The Only Way Is Up"!

A fabulous example of a preamplifier: The new Accuphase is extensively equipped, innovatively designed, made for eternity and has a superb sound. All this is reflected in a high resell value. Therefore, the high price can be considered reasonable.

All measurement results are excellent. Compared to the predecessor of the C-2150, the ambitious manufacturer has succeeded in further reducing the already very low distortion considerably; the complex "AAVA" volume control is characterized by exceptionally high channel equality; effective channel separation. A further highlight is the potent, low-impedance headphone jack, which easily drives even less sensitive, high-impedance headphones.

The smallest stereo power amplifier in the Accuphase range offers everything that distinguishes the top Japanese brand: a clean technical concept with selected components, first-class measurements, sensibly packaged features and – last but not least – a nimble, natural and excellently organized sound. Of course, the typical level meters are also on board. In view of all this, the price is reasonable. 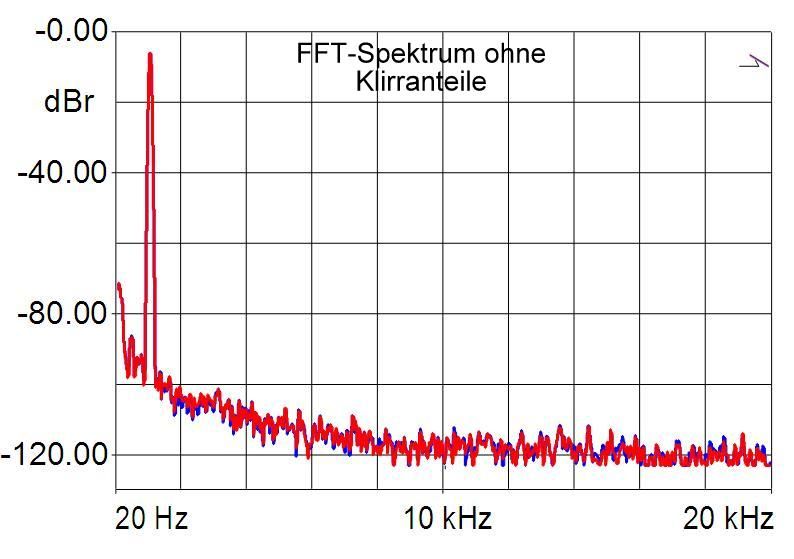 Fully adequate continuous and high pulse power for the vast majority of requirements at low distortion values, among which the intermodulations that hardly occur in the normal listening range stand out in particular; excellent noise values, effective channel separation. The P-4500 shows no weaknesses.

In a short listening-check, we let Accuphase's small pre-/power amplifier set compete against their entry level integrated amplifier, the E-270 for just under 5000 Euros. The latter also has a, albeit simpler, but equally precise AAVA level control, top processing and plenty of power thanks to potent output transistors with a good 200 watts of impulse power per channel into 4 ohms.

However, this could not hide the fact that the more than three times more expensive separates played in a world of their own, sounding much "bigger", more open, more clearly defined and more flexible. And yet the E-270 also revealed the audiophile "spirit" typical for the brand by combining clear definition with a high degree of musical pleasure and homogeneity. So whoever buys it will get a "real" Accuphase in every respect!