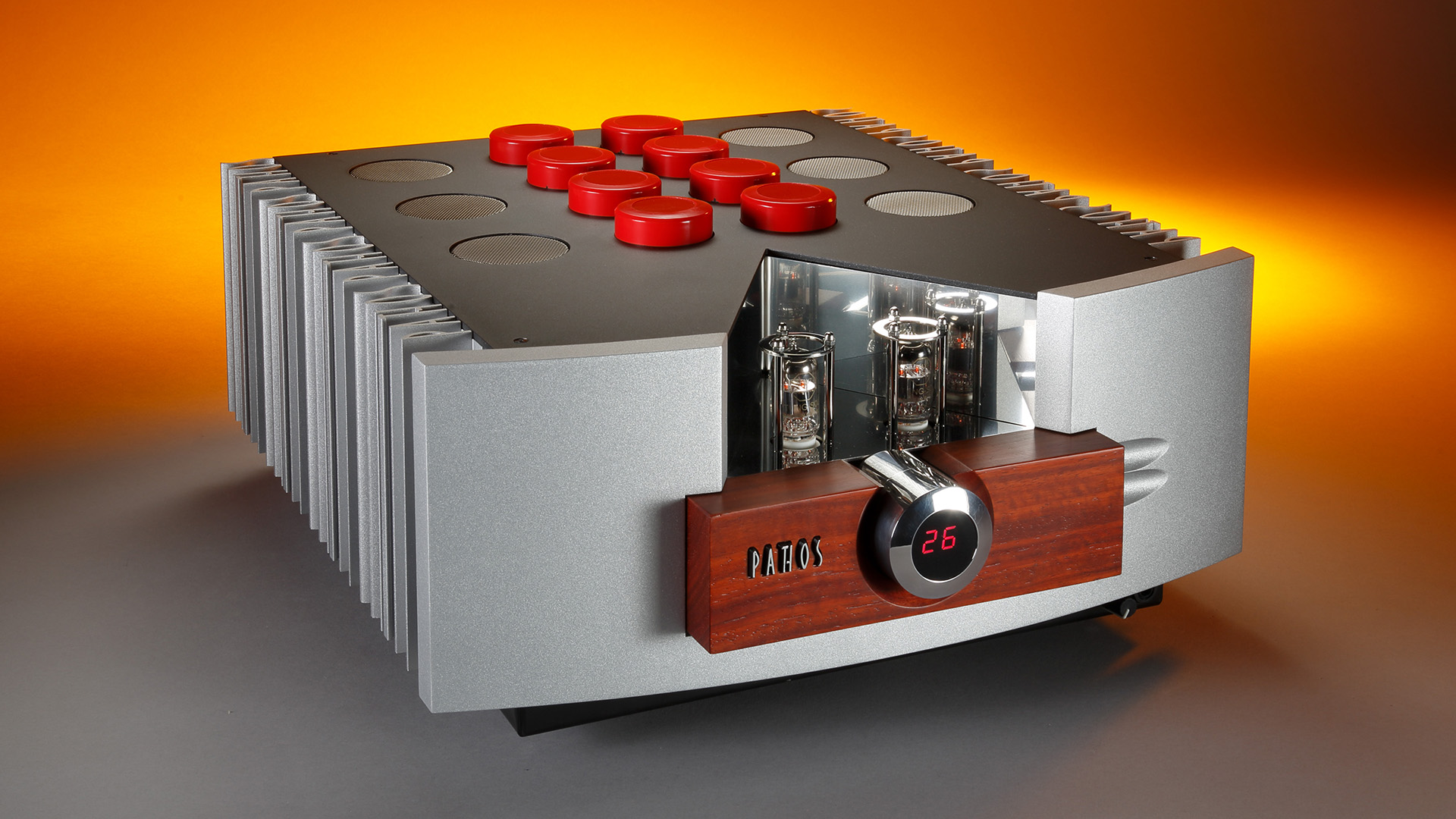 Eight cylinders with Power & Pathos – It‘s all in the name: with their new Kratos, the amplifier specialists from Pathos combine power with expressiveness and solidity with tonal finesse.

One of the most striking offers among the ambitious integrated amplifiers is the „Logos“ from the manufacturer Pathos, based in Vicenza in northern Italy, which is currently available as an updated Mk2 version. Starting with the look, it features an elegant wooden application with integrated volume control and digitally displayed level that is combined with aluminum. Its hybrid amplifier concept, in which tubes and MOSFET power transistors complement each other, is technically equivalent to the striking exterior.

Said Logos has now gotten a big brother: the „Kratos“, which is named after the Greek god of power and strength. It is more opulent, more powerful and clearly more expensive than the not even half as costly Logos - and it clealry displays this. Analogous to the supercars from Italian legend Ferrari, who sometimes let passersby look at their motors through a glass lid, the eight capacitor cylinders of the Kratos‘ potent main power supply stick boldly through its bonnet which is all the more striking as they are orange. In both cases the intended statement is the same: Look what I‘ve got to offer.

The 35-kilo amp with – as one colleague has painfully experienced – quite sharp-edged heat sinks in „Pathos“ design, planked on both sides, costs just below 8800 euros „naked“. Then, it offers seven high level inputs, which can be selected by means of the unmarked wooden remote control or with one of the two buttons on the right of the thick front panel. Two of these inputs are symmetrical.

The direct input of the power amplifier section, which simplifies the operation of the Kratos in AV setups, was also equipped with XLR sockets. This makes sense, as these are real complementary stages with two „hot“ outputs, which should be controlled directly symmetrically. That is, of course, done by the tube stage consisting of two double triodes of the type ECC803S from the production of the traditional US manufacturer Tung-Sol. These are said to have a decided combination of homogeneity and fine drawing.

Pathos selected them mainly according to the parameters of sound and reliability. The individually adjustable headphone output is designed to be so powerful that it can easily drive even critical models with high impedance and low efficiency.

We received the puristically designed Kratos, which offers neither balance nor tone control, with the optional „HiDac MKII“ digital module (around 600 Euro), which offers two USB interfaces for PC and/or Mac, a high-res capable coaxial input as well as one optical. The Italians also offer a phono card suitable for both MM and MC cartridges, which can be used in addition, but was not yet available to us.

Once broke in, a short warm-up phase of a quarter of an hour is sufficient until the Kratos is in full possession of its tonal powers. The manufacturer advises against continuous operation, as favoured by some high-end users, in the good operating instructions, amongst other reasons due to the thus reduced life-expectancy of the tubes. Pathos also recommends not to use electrical „troublemakers“ such as neon tubes, air conditioners, electric ovens or refrigerators in the same circuit. Thanks, you can‘t point this out often enough!

Attention when identifying the proper mains polarity! Our meter was misleading, probably „saw“ only the standby power stage. In the subsequent listening check, the opposite polarity that is also shown below proved to be the correct one, where the Kratos developed maximum spaciousness and homogeneity.

And that to an impressive degree. Those who know the Logos will hardly be surprised by the colourful, wide spectrum of the bigger Kratos, but will nevertheless be fascinated. The Italians didn‘t overstate: their eight-cylinder engine marched off on the „Bahn Frei Polka“ of the new STEREO listening test CD IX with both power and agility, carefully guarding the details, while remaining calm downright stoical even in the hefty bits, and demonstrating its audiophile „torque“ even at low volumes in the form of a bass and fundamental tone range that was as discreet as it was effective in boosting the sound.

That was neither prepotent, let alone superficial, for the subliminal demonstration of power did not come across as an urgent attack, but as sovereign calmness. And it was always dressed in breathing naturalness. Thus Anne Bisson‘s „Summer Me, Winter Me“ appeared with beguiling flair, dazzling and expressive. Meanwhile, the amp delivered a pronounced, crisp, conciseness with the dry bass impulses of Kari Bremnes‘ „Spor“, which it fired at any volume as determinedly as passionately from the woofers of the connected B&W 800 D3.

However, despite this energy, the Kratos is not a hooligan. Rather, it spreads the music out in front of the listener in a spacious and first-class organized way with a loose attitude thanks to its slightly pastel overtone range, which makes the sound appear pronouncedly untechnical – can you hear the tubes? The absence of a negative feedback may also have contributed to this tonal distancing from the speakers, with the Kratos‘ light hand developing a magical world, seemingly detached from external influences – thus wrapping the listener around its finger.

The emotionally competent Italian lent lively orchestral music breath, verve and enamel. Jakob Bellens‘ catchy but dramatic song „Beneath A Cloud“, the Kratos carried, on the one hand, as if floating on clouds, but at the same time gave it musical weight, thus underlining the noble-amp‘s pronounced – yes – pathos. Indeed it is all in the name!

The digital module played a special role here. Even by means of top converters and analog input via top cables, we were hardly able to achieve its resolution, coherence and luminosity. It is astonishing how sonorous and free of artificial artefacts the smooth mids got this way. For digital listeners who don‘t need a streamer or use a pure bridge for this purpose, the „HiDac“ option is highly recommended.

This applies to the entire device, which congenially cultivates and brings to life the idea of the „big amp“. The comparison with high-capacity engines is not far fetched. The Kratos is the eight-cylinder of amps.

The Pathos is a rock-solid hybrid amp from Italy, in which tubes drive powerful transistors as power-stages. It impresses with casual power delivery and an extremely natural, relaxed and three-dimensional sound image without traces of harshness and with an elegant touch to it. In the test, the optionally available "HiDac MK II" digital module, which is equipped with a USB interface in addition to other inputs, was also convincing. At 600 euros, it is inexpensive and makes external solutions superfluous. 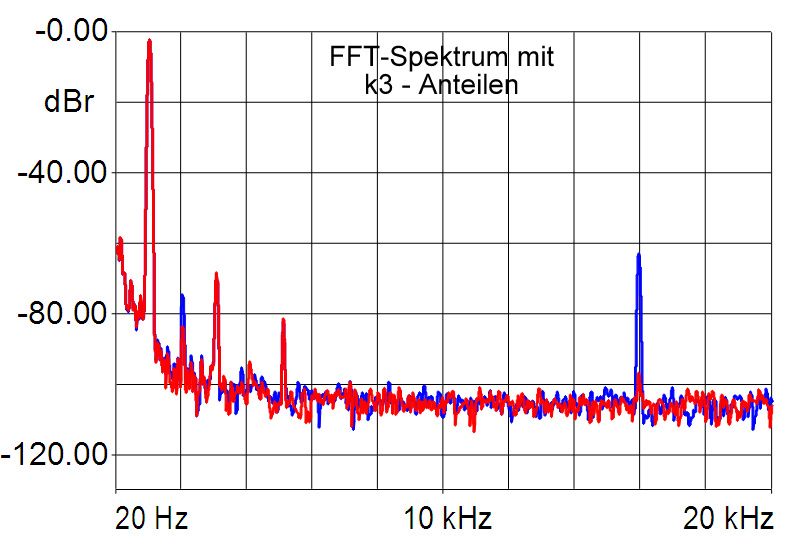