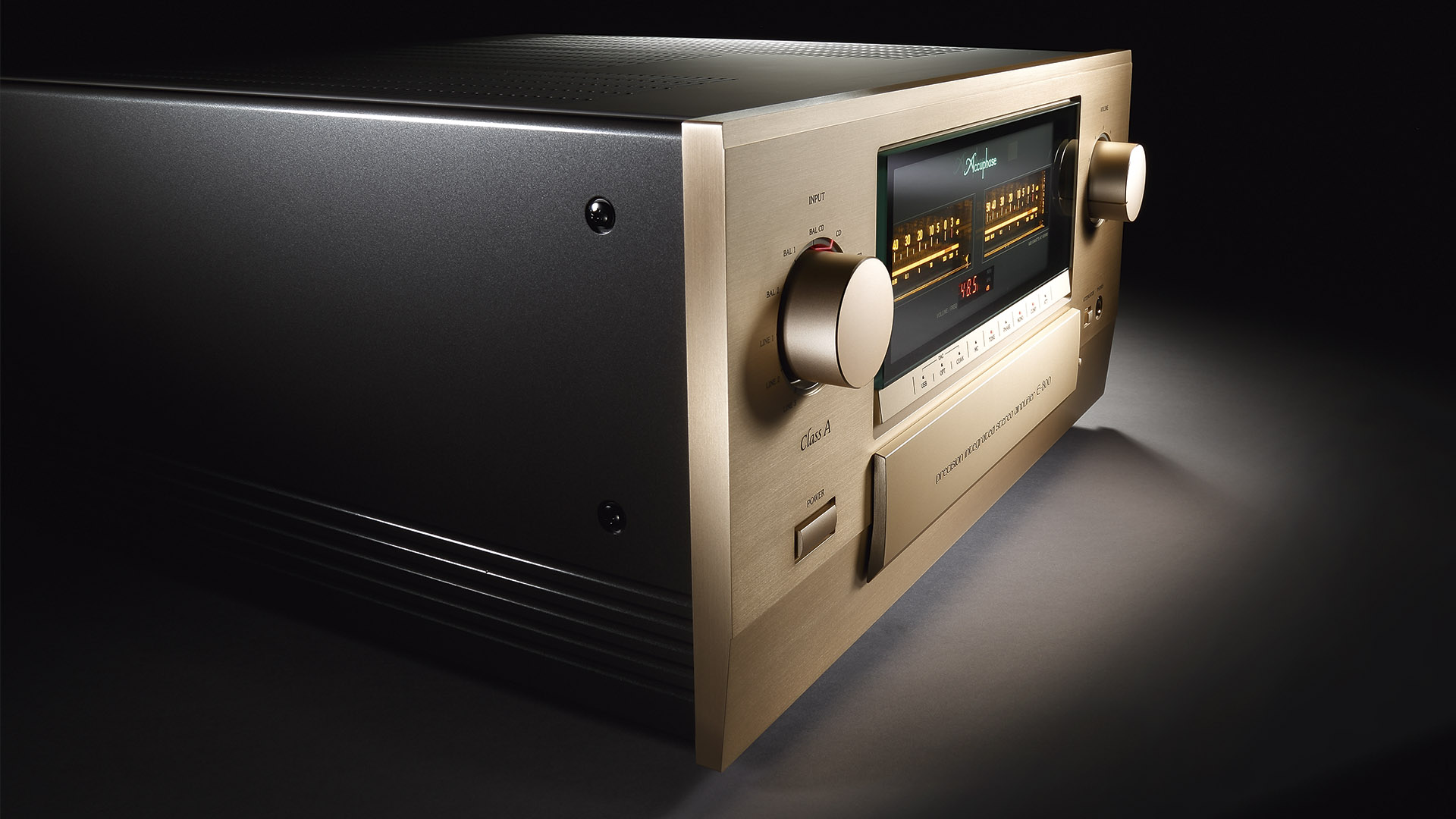 The Über-Amp – Accuphase crowns its line of integrated amplifiers with a super-sized amp. The E-800 shines with Class A operation and technical highlights, which the Japanese high-end manufacturer is known to offer.

What do we have here? The surprise that the Japanese manufacturer had for us was a success! The amplifier that Accuphase presented at the Tokyo International Audio Show 2019 attracted attention like a glittering nugget of gold. On a pedestal surrounded by visitors exclaiming "Ah!" and "Oh!", the new E-800 was the only integrated amplifier from the luxurious Japanese manufacturer to appear in the lush format of the larger power amplifiers.

When the first devices then reached the German Accuphase dealers, many a hi-fi disciple made a pilgrimage to their favorite store to marvel at the novelty. All that, because the E-800, which is around 24 centimeters high, weighs 36 kilograms and costs over 15,000 Euros, is something very special. As usual, it carries two power displays in its thick, pale golden anodized front panel, but these do not work with pointers. Instead, light strings consisting of 30 orange LEDs each twitch in the beat of the music and indicate the currently used power voltage in the range of a good 50 decibels. This is reserved exclusively for the best components from the Japanese brand. If it's annoying or for undisturbed listening sessions in the dark, this light show can also be turned off.

Otherwise, the E-800 is a normal Accuphase amplifier. But what does "normal" mean here? After all, the noble amps from Yokohama are packed with highly sophisticated technology in the finest quality of workmanship. A constantly improved poster child is of course the elaborate level control in the form of the highly complex, but ultra-precise and constant "Accuphase Analog Vari-gain Amplifier", in short "AAVA".

The smoothly running volume control only serves as a pulse generator, while 16 differently weighted current signals adjust the desired level via a cross-circuit both finely and precisely – in the upper range with steps of 0.2 decibels – precisely documented by the red digital display. AAVA is thus an active part of the amplifier circuitry and, according to the Japanese manufacturer, is intended to avoid signal loss, impedance fluctuations and distortions of usual attenuators. In the E-800, the circuit even works as "Balanced AAVA", i.e. in balanced mode with a phase-true as well as inverted signal routing, which is supposed to put an end to even the last remaining, tiniest deviations.

As always in Accuphase amps, the power electronics, which are fed from a powerful central power supply, sit on separate heat sinks on both sides, separated by channel. Among them, the dozen MOS-FETs per channel are located, which in the Accuphase-typical "push-pull" method with two "hot" outputs shift the speaker membranes between them. To ensure that this happens in the most controlled way possible and that the E-800 has a firm grip on the woofer in particular, the developers claim to have increased its damping factor by 25 percent compared to the previous top model, the E-650.

Those who expect an overpowering wattage due to the sheer size of the E-800 and its power blocks were indeed deceived by it. The curved "Class A" lettering underneath the input selector, which is designed for long-term stable relays, already hints at it: the highest quality takes precedence over pure mass here. In order to avoid the dreaded transfer distortions during the transition of the signal from its positive to its negative half-wave, the power transistors are kept open over a wide power band; which worsens the efficiency because a good part of the energy is constantly dissipated in heat, but avoids potentially harmful switching processes.

According to the E-800's data sheet, this range extends up to 50 watts per channel at eight ohms and 100 watts at four ohms. In reality, however, the amp is significantly stronger – see our measurement values under technical details – but above these marks it changes to switching mode, where level peaks are certainly offered, but are rarely reached in reality. Ultimately, the Accuphase is an AB amplifier with a particularly high quiescent current. Nevertheless, the E-800 is not a cheat, because the promised performance is achieved in Class A mode, as can easily be seen from the appropriate power consumption at rest. This energy has to go somewhere then; it flows directly into the cooling bodies. Nevertheless, the amplifier does not heat up excessively, which speaks for its Class A concept and design.

You can indulge yourself in the list of equipment, which is as rich as we expect it to be. The Japanese amp allows the connection of a wide range of devices, offers a switchable tone control, a balance control and a powerful headphone jack, which drives even demanding models effortlessly to peak performance. Tape fans will also discover a setup that allows for monitoring. Phase reversal, mono switch, loudness "compensator" and a muting round out the array of convenient features. As usual, most of these functions sit behind a small panel that slides down silently at the touch of a button.

Outputs and inputs are also found among the jacks in case you want to run the preamp or power amp sectors of the E-800 separately. Bi-amping can also be accomplished via RCA or XLR outputs, with the Class-A A-48 power amp from the Accuphase lineup being the natural partner.

In our large STEREO listening room, the "über-amp" had to prove itself on its own, playing with B&W's quite picky 800D3. And it passed this test with flying colors. One is almost inclined to recognize the E-800 as a benchmark for the lightness and natural matter-of-factness with which an integrated amplifier can perform. Ana Caram's rhythmically intricate "Telephone Song" bubbled out of the speakers in a completely relaxed and at the same time exemplarily fanned out and homogeneous manner. The song came from the Accuphase SACD player DP-560, which we connected completely with HMS Suprema cables – RCA, XLR and digital coaxial.

When switching between the inputs, it became apparent that the E-800 achieves its extremely open playing style especially via XLR. Good thing that it is equipped with three of these. Via RCA, the playback quality narrowed a bit and appeared minimally rounded tonally. The high standards offered by the optional DAC-50 digital board (see side) were proven by the fact that the performance was very close to the XLR result. Thus, an external DAC is not needed in most cases.

The same applies to its phono counterpart AD-50. Even high-quality pickups are able to display all their qualities here, playing freely and uninhibitedly, spacious and powerful. The AD-50 can easily compete with separate phono preamps of the same price range. On top, you won't need an additional device as well as a set of high-quality NF cables. The board module also relies on the electric potential of the E-800, which avoids disturbing equalizing currents – not an insignificant argument.

What had been foreshadowed during our first listening sessions with the Accuphase E-800 soon turned out to be a sound image filled with superlatives: the orchestra of Chadwick's "Jubilee", starting vehemently, stood in the room both high and deep as well as expansive, as if reproduced by a pre/power amplifier combination of the highest league. The sound was filled with grandeur and glory, even when the musicians dropped back to a quieter pace immediately after the start. The E-800 never lost its sense of the tension, keeping attention close to the melodic curves, but at the same time took a step back and observed the acoustic scenery from a superior perspective.

Of course, the Accuphase arranges and structures decisively and with a precision worthy of a drawing board. At the same time, however, it brings all those lines together into a harmonious whole and thus manages the balancing act between analytics that reveal every detail and an emotional coherence that is astonishing. Even when one considers the price range.

The impression of pronounced naturalness and floating grace is supported by the truly exorbitant colorfulness of the mids, which are as dazzling as they are sonorous and reproduced without any artificiality. This turns the E-800 into a master of voices, atmosphere and nuances, which seems immensely alive and "real" all in all. Of course, this "über-amp" can also be loud, but it was not created to beat up speakers. It rather produces enchanting music!

The E-800 is indeed an "über-amp" that delivers comparatively high power in Class A mode, is filled with equipment, shines with superb lab results – and sounds outstandingly good on top of that. Thus, a typical Accuphase! 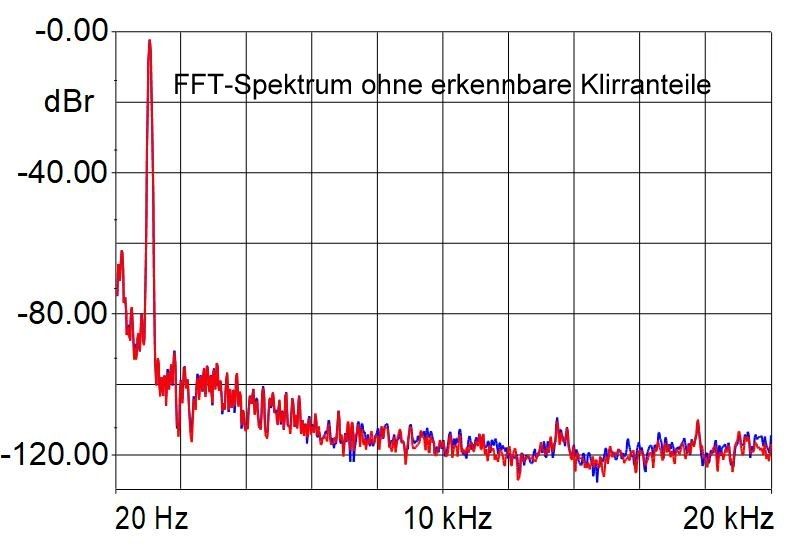 For some time now, Accuphase has been relying on plug-in boards for anyone who wants to connect a turntable and/or digital equipment to one of their preamplifiers or integrated amplifiers. Two slots are available on the E-800, which can be divided between: the phono board AD-50 and its digital counterpart DAC-50 (around 985/1230 Euros respectively) as well as the high-level variant Line-10 (around 155 Euros), which extends the connections of the amp by an additional RCA input. The AD-50 and DAC-50 are already the fifth and fourth generation of their kind.

Thus, both are up to date, which is especially true for the digital module that works with PCM formats up to 32 bits/384 kilohertz as well as quad DSD via the USB interface thanks to its fast AKM chips (AK4490EQ) used in double parallel mode for effective error prevention. The coaxial input at least digests 24 bit/192 kHz.

The AD-50 cooperates with MM and MC cartridges. Its high MC amplification factor of 66 decibels ensures pleasantly rich levels, the three-stage selectable impedance (30, 100, 300 ohms) for optimal adaptation to a variety of MC pickups. If you want, you can switch on a subsonic filter (-12dB/oct. at 25 Hz); the MM/MC selection is switched just like that of the three Digital Inputs of the DAC-50: from the front panel of the E-800, which conveniently can also display the digital sampling frequencies.

Lab measurement-wise, both boards are top notch. Especially the high MM/MC signal-to-noise ratios of the AD-50 are superb. In terms of sound, the modules are also very good.

Monitoring used to be commonly integrated, but today can only be found rarely: it describes the possibility to listen to the signals of the recorder while simultaneously assigning any source to the tape outputs and thus to control the signal quality during the process of recording.