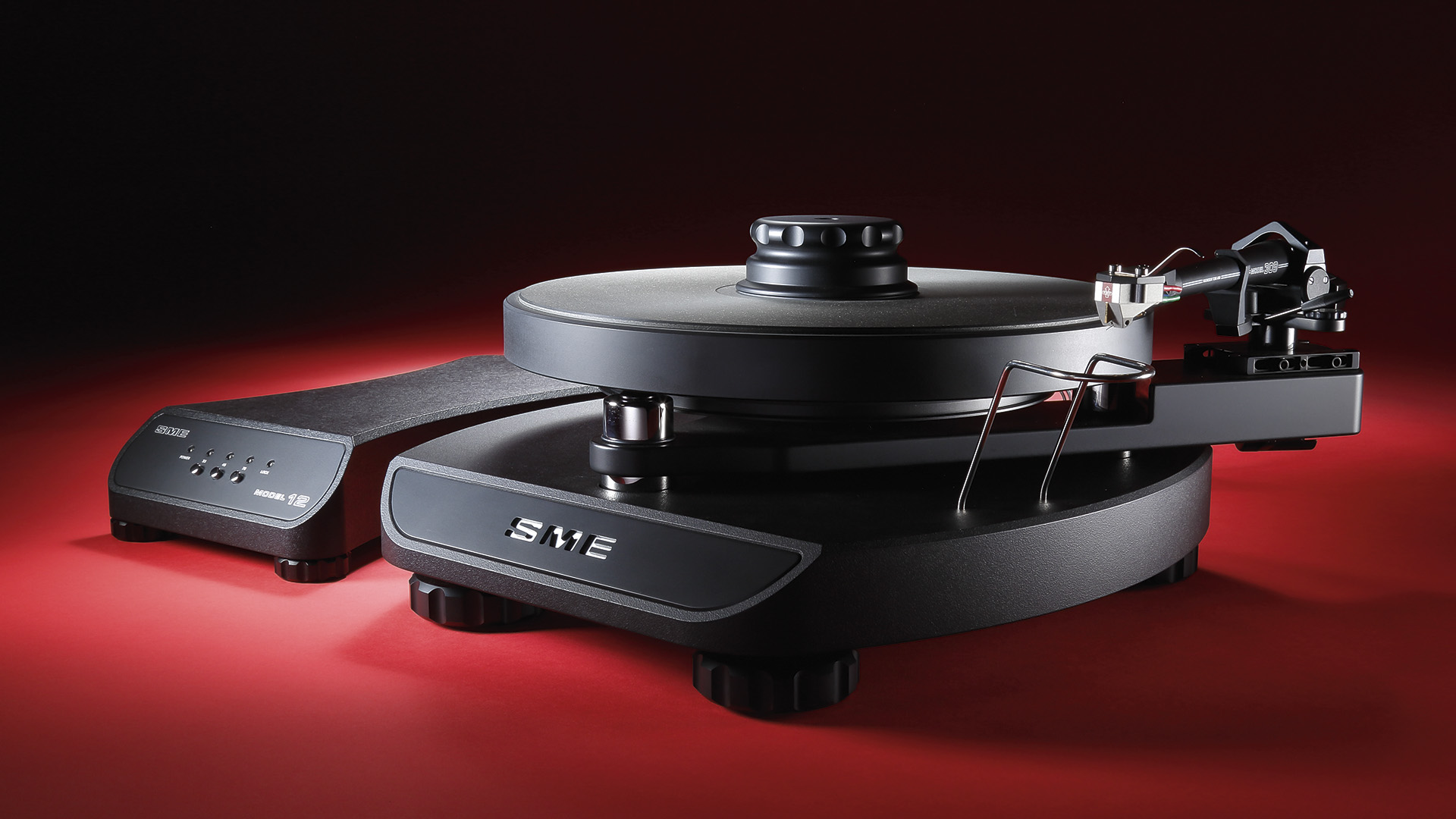 SME at its best – Wow! This looks fantastic! As a successor to the Model 10, the English analog specialist SME presents the new Model 12 turntable, which will not only appeal to vinyl fans with its attractive shape.

None of the other famous turntable „Models“ from the legendary analog forge SME in Steyning, southern England were closer to resembling a real life fashion model than the brand-new Model 12. The round hips of the two-piece turntable‘s drive and the slender waist of its control module fit perfectly into each other, giving it a soft, somehow feminine look despite its rather technoid feel and the tonearm protruding like a pointed elbow.

Nevertheless – or perhaps exactly because of that – the Model 12 is a turntable for the experienced hi-fi enthusiast, as, for him, hard facts count just as much as the indisputably great reputation of the SME brand. And in that regard the player, which weighs a good 25 kilograms, has a lot to offer! In addition to the aluminum base, which was milled from one solid block and which has the SME logo carved into its front plate, the Model 12, for example, features a high-precision disc bearing whose steel shaft ends in an extremely hard ball of tungsten carbide. Latter, in turn, rests on a counter bearing made of equally resistant phosphor bronze, giving the turntable outstanding rumble measurements (cf. diagram).

On top of the 4.6-kilogram heavy sub-platter, that is driven by a flat belt, lies the record carrier with its slightly roughened „Isodamp“ surface for intimate contact with the vinyl. The bearing for the two-piece platter rests on a twelve-millimetre thick metal profile, which is suspended from three chrome-plated domes together with the three centimeter thick base of the tonearm. Although the Model 12 does not have a subchassis suspended from rubber bands like the larger SMEs, small polymer pads underneath the domes reduce the transmission of vibrations from the base to the plate and tonearm, which are hardly susceptible to vibrations anyway.

Such vibrations could, for example, come from the motor, which is, however, equally decoupled and mounted on three spikes in rubber dampers. It is a type with eight-poles and equipped with powerful neodymium magnets. The motor is supplied and directed from the separate control unit. This is done very potently with six MOSFETs supplying up to 1.2 amperes of current, generating such a high torque at startup that the motor must be held in position via a rubber ring that compensates for the belt's pull. However, the motor is also very sensitive and precise, as the drive signals are generated by a ten-megahertz quarz, whose frequency is yet again increased by a factor of four to 40 MHz for the microprocessor.

After selecting the desired rpm – beside 33 and 45, 78 is also possible – the plate takes up speed quickly, while the associated white LED flashes. When the target speed is reached, the light stops, and the „Lock“-led lights up as a sign of a closed control loop. Then, three sensors of the AC motor report even smallest irregularities, such as when a record brush is applied, allowing the electronics to regulate them. Fine adjustment of all three speeds is also possible – in steps of +/- 0.01 percent.

For their tonearm, SME relies on its proven nine-inch 309 model with a stiff magnesium tube and detachable headshell that can be easily rotated for azimuth adjustment. A special feature is that all 309s for the Model 12 are equipped with new internal cabling from Crystal Cable (cf. box). So that their advantages are not lost further down the signal path, the connection cable, with its typical angular plug and two Cinch contacts, is of the same type.

Okay, so let‘s fix Ed Partyka‘s wonderfully atmospheric new big band record with the supplied metal screw record clamp, which is manufactured flawlessly like the rest of the device. The local SME distributor was kind enough to provide and adjust a JSD6 by EMT from Switzerland to the SME 309. The SME 309 enters into a wonderfully harmonious marriage with the nearly 2700 Euro expensive MC-pickup, and the Model 12, which was quickly levelled beforehand using its adjustable feet, showed immediately what it is capable of. Not only in „The Great City“ the reproduction was spacious, calm and yet exactly on point and connected in every respect.

We could have easily just left it that way, but nevertheless changed over to the Transrotor Figaro, of which a second specimen ran on the Rondino Nero, which is one of our reference record players and which set the benchmark here.

The SME was, however, not willing to be outpaced and approached the challenge as relaxed as concentrated. It was almost unbelievable how casually it presented even the smallest details, for example in „I‘d Love Being Here With You“. In fact, the Briton demonstrated two of its most striking features with the fast opener from Diana Krall‘s „Live In Paris“ album: there is, first of all, its talent for differentiation and precision in tonal, rhythmic but also dynamic nuances. The dialogue between guitar and piano in the title‘s middle section, which was presented with a straightforward comprehension of its beat, and which we have so far usually perceived as nothing more than an intermezzo between the vocal passages, thus acquired its own captivating drama.

Moreover, minute changes in the timing of musician were rarely before so clearly revealed, their distances seldom depicted more vividly on the wide but perfectly staggered stage. The new SME, conjured the delicate, fragrant flute concertos from Antonio Vivaldi‘s pen with a light hand, only to immediately afterwards present „Freewill“ from the Canadian band Rush in proper hard-rock-manner. There is no question that it is the exact opposite of uniformity and monotony. The Model 12 stands for tingling musicality.

This certainly has something to do with the Crystal Cable, which on the one hand promotes the Englishman‘s openness and on the other supports its urge for physical wholeness and thus completes the uncompromising nature of the turntable from the important side of the cable.

This record player always gives its owner the impression of highest quality – in handling as well as in listening. And all of that in this very attractive finish. The Model 12 is simply SME at its best!

With the Model 12, SME offers an „introduction“ to its customized turntable program. It will further promote and consolidate the legend of the British manufacturer. The impeccable workmanship, seemingly made for eternity, is complemented by an extremely lively, spacious and, above all, rhythmically sophisticated sound. With regard to the top tonearm including high-quality, certainly not very cheap cabling, the price can be regarded as competitive. 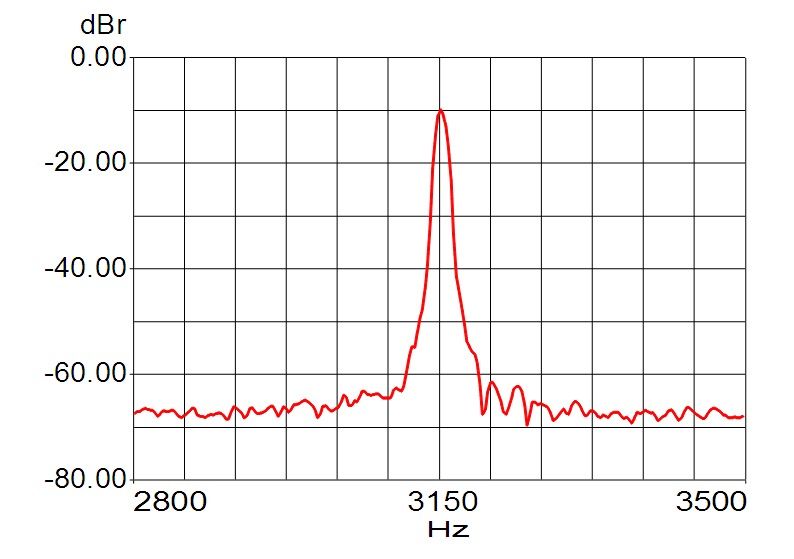 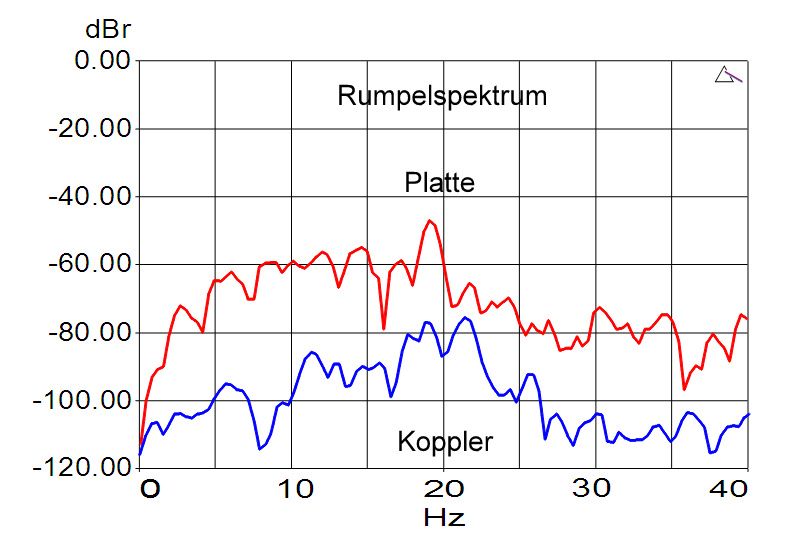 Thanks to fine adjustment, we were able to set the speed exactly to 33.33 rpm. The fantastic synchronization values (above) don‘t show any secondary maxima and are among the best we‘ve ever measured. The extremely low rumble values – especially in connection with the measuring coupler – underline the quality of the plate bearing.

The tonearms of the type „SME 309“ supplied with the Model 12 are delivered with high-quality pure silver internal wiring by the specialist Crystal Cable under the designation „Pure for SME“. The 1.2 metre long phono connection cable (below) is of the same type. The British also announced an upgrade program for their older arms, in which the widespread 309 and Series IV are converted to the so-called „Pure for SME“, whereby the internal cable set as well as the corresponding connection to the phono amp is upgraded. For the top tonearm Series V and the long 312 there‘s an even higher quality version called „Premium for SME“.

Analogue fans who take advantage of one of these offers will also have the option of a discount on the immediate or future purchase of an SME drive. At the time this review was finished, the amount of the discount was not yet fixed, nor were the exact prices of the tonearm upgrades.