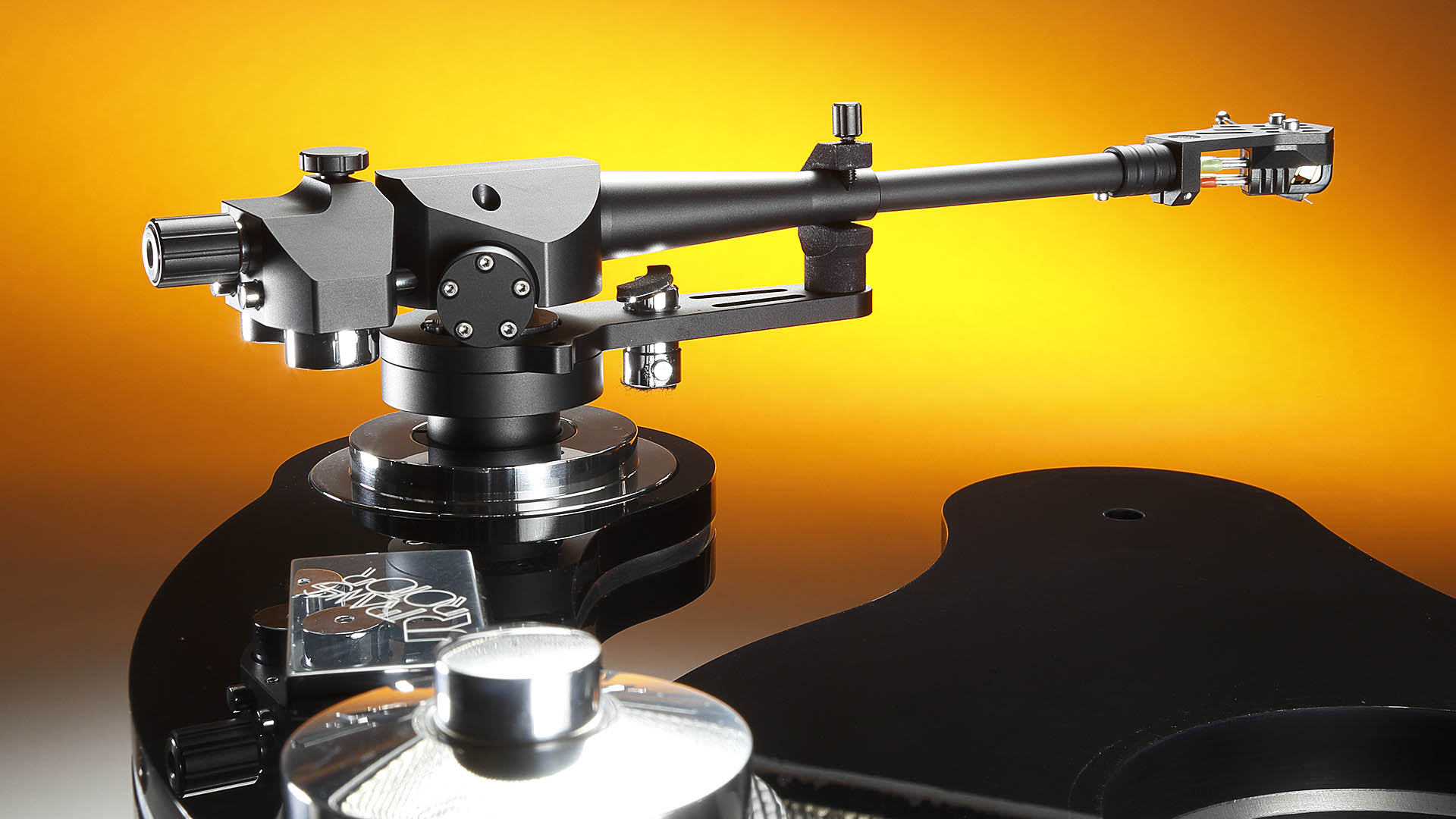 Eagerly Awaited – Transrotor has been building turntables for around 45 years. Now, the analog specialist presented its first tonearm. It was a long way, even further than expected, until the newcomer was finished; but the new TRA9/2.1 is a masterpiece.

Transrotor founder and mastermind Jochen Räke has had an idea on his mind for a long time: constructing a tonearm in his own manufactory to accompany his popular turntables. Time and again, however, he postponed this enterprise. Other projects seemed more urgent, and besides, in their role as German distributor for the analog products of the English manufacturer SME, the company from western Germany had access to some of the best tonearms in the world anyway. Thus, for decades, the more expensive Transrotor turntables almost always left the production line with a pre-assembled SME arm.

Yes, they were so closely allied with the British company that these even supplied special versions for Räke's devices – featuring more differences than the imprint writing "Transrotor". For example, the Transrotor arm known as TR5009, which largely corresponds to SMEs 309, received the vertical bearings of the large, legendary SME Series V as well as its internal wiring. For the smaller devices, the Japanese specialist Jelco was a reliable and inexpensive supplier.

Well, both of these are a thing of the past now! SME, under new management, changed not only their German distributor at the beginning of 2019, but, towards the end of that year, decided something far more drastic: to stop supplying tonearms to third-party manufacturers. Jelco shut down completely shortly thereafter. At the time of this announcement from SME, the developement of the Transrotor tonearm had already come a long way; but now it took on additional urgency and importance. It would no longer be a mere alternative, but rather had to fill the gap that SME had created, after selling off what remained in its then still well-stocked warehouse.

Nevertheless, the Transrotor team was not driven to haste by these events, but took the necessary time. In fact, they had shown the first prototypes, which already looked mostly finished, at the "Norddeutsche HiFi-Tage" hi-fi show in Hamburg in February 2020. Still, it is only now that the the tonearm, which has been changed as well as improved in many details since then, is coming onto the market, with the name of TRA9/2.1 being given to the fascinating analog creation.

It is available in four visually different, but technoligically identical versions, whereby the matte black basic version at a price of 4300 Euros presents the entry level. The chrome-plated, gold-plated or ruthenium-plated – for the platinum look – versions are significantly more expensive (see Image Gallery).

Even in black, however, the Transrotor tonearm already looks really good. This positive impression is reinforced even further when you take a closer look at the immaculately manufactured arm. The first thing that catches the eye is the two-piece arm-tube composed of sleeves of different aluminum alloys, which is supposed to be virtually resonance-free. Not to forget the stable bearing bell, milled from a solid block, which sits on a gimbal-mounted frame that moves in three highly precise, exactly adjusted steel and ceramic ball bearings.

After a series of tests, Jochen Räke and his production manager Lars Hornung, who was responsible for developing the tonearm, ended up with this solution, which not only proved to have the lowest friction, but also the lowest breakaway torque. This is very important, because the bearings do not rotate at high speeds here; but very slowly, and also change direction constantly. The force that the bearing exerts against the motion should thus be as small as possible. To prevent the horizontal bearings from pulling awry, Transrotor also had extremely flat retaining nuts manufactured – just one of countless possible little errors that no one had anticipated in advance and that had to be identified and eliminated during the production of the tonearm, which was designed on the computer using CAD software.

The story surrounding the cables inside the tonearm, which are equipped with silver-plated plug-in contacts, is a typical example: each consists of seven pure silver individual strands, which Transrotor has put into a plastic tube, because it was discovered that their unprotected proximity to the metal of the arm – which has been additionally insulated from the inside after this discovery – has a negative effect on the sound. In addition, they are slightly twisted towards the base to an exact degree so that they behave in a neutral way towards the horizontal movement of the TRA 9/2.1. All of this had to be identified, considered and implemented.

The division of the magnetically acting anti-skating also posed problems for the team. They used the "WallySkater" of analog guru Wally Malewicz, who died in 2018, measured the correct values with it and determined: "Most tonearms tend to overcompensate." That shouldn't be the case here. On the axis of the precisely running skating regulator, there is a mark for the counterforce at 18 millinewtons as a guide. If you push the magnet running on the inside further forward, you will achieve higher values.

The tracking force is adjusted via a spindle that also rotates in two ball bearings. This allows the carrier, which is equipped with two weights on its underside that can be selected according to pickup weight, to move forwards or backwards. A scale does not exist. Instead, an electronic tonearm scale is included.

At the other end sits the headshell. In contrast to earlier designs, Transrotor does not employ a quick-change system for reasons of stability and to avoid additional contact transitions. This means that it is fixed to the arm, but allows for azimuth adjustment. At the tonearm base, a five-pin connector sits ready for the 1.3-meter phono cable, which is equipped with RCA or XLR connectors depending on the customer's preference, and matches the internal wiring to avoid tonal inhomogeneities.

Handling the TRA 9/2.1 was pure joy: from the noble surfaces – even the bead blasted and galvanically black anodized version impresses with perfection – to the gently running wheels to the free, extremely smooth-running bearings, everything was top-notch and really seemed so experienced, certain and professional, as if Transrotor had always built tonearms.

What about the sound then? We created ideal conditions for the listening test, using Transrotor's reference turntable Rondino nero as an unerring basis. As always, the tried and tested, precisely adjusted TR5009 was mounted on its right side. A second base was occupied by the TRA9/2.1, meticulously placed by Lars Hornung. Both arms were each equipped with a Transrotor Figaro MC pickup, which came from our test supplies and of which we know that they sound practically identical. To avoid differences due to the phono cables, we used the same ones for both, plugging it into the other after testing it with one.

We started with James Taylor's "Her Town Too", which was built upon a powerful bass and sounded as clean and powerful as usual when using the TR5009. Now came the TRA 9/2.1. Lo and behold: Transrotor's device did not position itself dutifully behind the rival tonearm, but aimed to catch up with this model, if not even to surpass it. To achieve that, it displayed somewhat of a tighter grip on the low frequency range, reproduced the music of the American a bit clearer as well as more distinctly outlined and set the background voices apart from him more articulately. The TR5009 scored, at best, with a diction that was fuller by a few nuances, through which it seemed a bit cozier and more reliable in the musical sense.

Subsequently, it turned out that the test songs were always reproduced a bit more spatially and transparently via the Transrotor arm. This was clearly evident, for example, in Diana Krall's swift opener to her concert at the Olympia in Paris, which was listened to many times with the combination of TR5009 and Figaro. When the TRA9/2.1 came into play, the dimensions of the venue seemed even wider, higher and deeper, we perceived more of the fine reverberation the live recording offers, which made the sound a touch more fanned out and open.

Likewise in Chadwick's sometimes massive, sometimes delicate orchestral suite "Jubilee". Once again, the performance of the new tonearm was more refined, the one made by the contrasting model from SME more rounded. A sensational achievement for the TRA9/2.1 as well as confirmation of the success of its often difficult, elaborate development process.

Our conclusion: Those who operate a TR5009 or even SME SeriesV certainly do not have to switch to the TRA9/2.1. All those who are about to purchase a larger Transrotor turntable, however, might order the newcomer with anticipation, especially since the company is likely to put together discounted combination offers with it as well. After all, what took so long to plan turned out to be not only good, but simply first-class!

The development of the first Transrotor tonearm took around 18 months, countless tests and 3D models. The standard was set very high, but the effort was worth it. The TRA9/2.1 easily plays on par with the ambitious competition and impresses with its flawless manufacturing quality and precise, differentiated reproduction.

Rating without percentages for sound level, since no comparable devices exist.