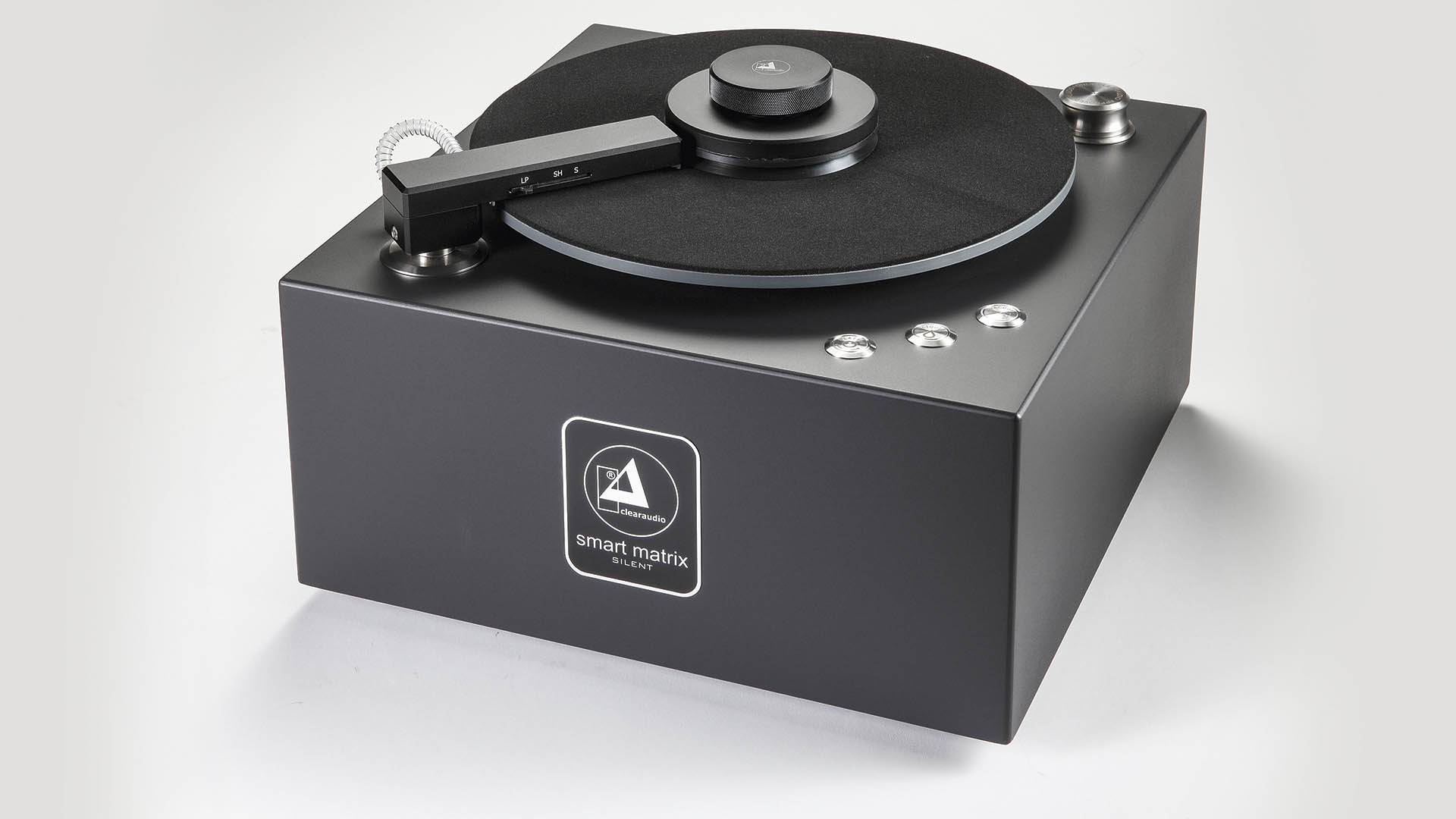 Cleaning Power on Silent Paws – Clearaudio's Smart Matrix Silent cleans vinyl records and makes hardly any sound in doing so. While testing, we even discovered more practical aspects of it.

Have you ever seen a TV commercial in which a carpet is cleaned with a vacuum right next to a sleeping tiger, without waking up the wild animal? The advertising message of such a daring experiment: This vacuum cleaner is downright brutally quiet.

To be honest, I wouldn't dare to do the same with Clearaudio's new record cleaning machine Smart Matrix Silent. Still, it rotates its platter in a particularly quiet way and, especially when sucking away the cleaning fluid, pleasantly avoids any shrill sounds. This makes the cleaner – having an uncomplicated and smooth design and being available in black and silver – especially friendly for your living room, because it is not annoying, which could otherwise lead to your relaxing partner extending their claws – hardly any less dangerous.

The Smart Matrix Silent thus works at a few decibels less, in comparison to Clearaudio's large Double Matrix Professional Sonic (pictured above) for circa 3950 Euros, which has been reliably cleaning vinyl records in our office since 2015.

The new Smart Matrix Silent now stands in contrast to this machine, which can work fully automatic if desired and also cleans both sides of the record at the same time. The smaller model, our test subject here, costs just around 1,500 Euros and requires manual inputs. This does does not have to be a disadvantage, however.

The Smart Matrix Silent comes out of the box practically ready for operation. It is only necessary to put the tiger in the tank, meaning to fill the supplied washing liquid into the inner container, which is closed by a metal plug sealed with a rubber ring. You should not pour in the entire contents but keep at least a third in the bottle. We will tell you why in a moment.

The machine is turned on and given power via a switch on its back – and you're ready to go! To start, place the vinyl record that is to be cleaned on the foam rubber coated platter and fix it firmly in place with the help of a large screw that has a rubber lip to protect the inner label.

As soon as the arm is moved on top of the disc and lowered onto the record, a small portion of the cleaning fluid is automatically applied to it and the platter begins to turn counter-clockwise very quickly. If you want more of the tincture, press the "Liquid" button located on the upper right side. This activates the pump again, for as long as you keep the button pressed. This dispensing can be triggered at any time.

Now the platter rotates under the small arm, which is equipped with microfiber strips reaching down into the grooves to loosen and whirl up dust and dirt. Depending on the amount of dirt the record holds, this procedure can be continued for as long as desired. The machine even changes the direction in which it rotates after you press the "Platter" button, aiming to improve the result. In the case of very dirty and heavily encrusted "flea market finds", the arm can be lifted up during the cleaning, in order to allow the special fluid called "Pure Groove" to take effect for a few minutes.

Anyway: If it's enough, you press "Vacuum", which causes the liquid to be sucked into an inner container, with the resulting sounds being dampened. The direction can also be changed during this step, and the instruction manual – which is exemplarily detailed and informative in all respects, by the way – recommends that the process be completed counterclockwise.

All this is done by the Smart Matrix Silent with the routine of an expert; Clearaudio produces hundreds of record cleaners every year. They also don't forget the fans of singles. To clean the miniature vinyls, there is no need to handle additional spare arms: you just adjust a small slider on the arm to the respective size, ensuring that the liquid is only applied in the correct area and nothing drips past.

Learning how to operate this quiet machine from Clearaudio is quick and easy. For example, you´ll learn that it is important to safely retract the arm after the liquid has been vacuumed off, because otherwise the arm might easily be pressed over the record again by the tube, which lowers the platter and restarts its movement. You also quickly learn what the correct dosage of fluid is, so that nothing runs over the edge of the record or platter. It can happen, however, especially at the beginning of a washing session, that the entirety of the record is not wetted immediately by the first wave of liquid and the vinyl runs partly dry – a phenomenon that, by the way, does not only occur here.

A little trick helps to prevent this. For this, a swan neck flask (pictured above) is used, which you can buy cheap in pharmacies or drugstores. You can then use this to create a narrow line of liquid across the record before starting, and then only pump more of it out of the tank later as required. In this way, particularly dirty areas can be "watered" at any time.

Either way, the great thing about cleaning vinyl records is that every single one, no matter how clean it might appear beforehand, benefits: it sounds more differentiated, the playback is more spatial and undistorted. The micro dust is removed from frequently played records, which brings hidden details to light. And the Smart Matrix Silent does all this without any roaring volume or screeching.

In this machine Clearaudio combines its know-how in record cleaning with a relatively quiet operation, moving record cleaning from the hobby room into the living room. Thanks to the arm, which can be adjusted to different diameters and thus records, there is no need to handle several arms.

It is one of the mysteries of hi-fi: the influence the power supply has on the sound of turntables. Other source devices such as CD players or streamers, and of course all kinds of amplifiers, modulate their signals from the energy of their mains-powered power supply. In the case of turntables the power supply is usually only responsible for driving the motor, because the pickups, no matter if MM or MC types, generate their signal currents completely independent of any external supply. Nevertheless, practically all turntables we have tested react sensitively not only to the mains phase, but also to mains filters. Most manufacturers are aware of this fact and equip their turntables with power supply units, some of which are extremely complex, especially in the high-end range. All of this seems even more astonishing when considering that heavy platters and decoupling belts should largely relativize the importance of already minor irregularities in the drive and its power.

But theory and practice take very different turns here. For this reason, Clearaudio recently started offering a (virtually) ultimate solution in the form of two "Smart Power" battery-based power supplies for its 12 and 24 Volt turntables, which make the supply of the motors completely independent of any mains disturbances. Not too long ago, we successfully tried out the smaller model (12V), which costs around 690 Euros, together with the Concept Active turntable. It benefited, of course, especially because it has integrated phono and headphone stages. Even when those were turned off, however, the power supply also added more spatiality to the sound, and made it more relaxed and "grown-up".

While it technically does the same, but has a wider range of options, the considerably larger 24 Volt version is much more versatile. It is available in black and silver and starts at around 2500 Euros. This power supply offers a dimmable display for controlling and monitoring its functions. These include, for example, a battery level indicator which automatically connects to the mains at the touch of a button or when the battery is empty. This process can be monitored in both directions, accurate to the percent.

Our test partner for the Smart Power 24 Volt was a Clearaudio Ovation with a Clarify tonearm and the MC Talismann V2 pickup. We listened to it alternating between the Smart Power device and the included power supply. When using the extra module, the music sounded much more audiophile, which is to say calmer and clearer as well as with a more precise timing. It also succeeded in adding more homogeneity to voices and having a breathing aura in wide melody arcs and thus sounded of higher quality. Hard to believe, but true. It remains a mystery!